Microsoft Ignite went off with a proverbial bang when CEO Satya Nadella took the stage in Orlando, Fla., to announce major news about Office 365, Microsoft Graph, the augmented reality platform Microsoft HoloLens and then brought a group of big brains on stage to talk about what the future portends for scalable quantum computing.

For sheer gee-whiz factor, while Nadella spoke, Microsoft impressively tapped its own artificial intelligence technology to simultaneously translate the CEO’s address into 12 languages.

“When we talk about technology, we have to keep in mind the timeless values that drive what we do,” he said, adding every piece of Microsoft’s technology should “embellish the capacity of human beings. We want more productivity, but we don’t want to degrade humanity. Our mission is to empower every person and organization on this planet to achieve more.”

Technology trends and paradigms will come and go, Nadella noted, but that mission “will center us in our purpose.”

For instance, he explained the details surrounding Microsoft Graph, a centralized application programming interface formerly known as Office 365 Unified API. Microsoft has injected the API with the ability to search from whatever application a user is in — SharePoint or Office, for instance — for a number of new types of information, including files, email and calendars.

Making good use of its new social media acquisition, Microsoft also revealed that Graph will draw data from LinkedIn and integrate LinkedIn data with Office 365 profiles, the aim being to make the API more collaborative and business-friendly. 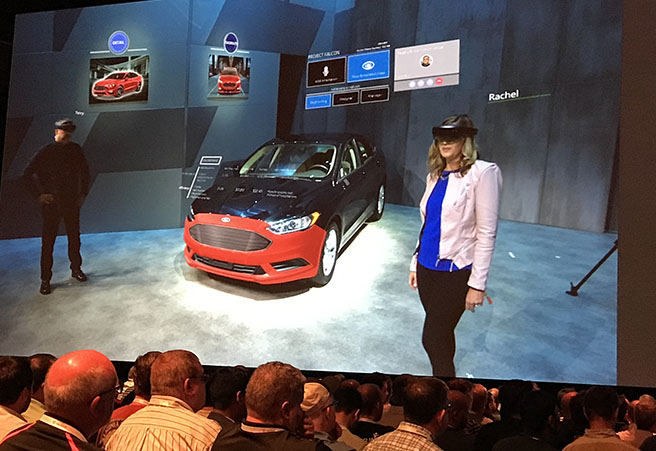 The theme of much of the keynote and the panel’s discussion was about the changing nature of work, which Nadella described as “about unlocking creativity inside an organization.”

Microsoft 365, which is Microsoft’s single solution that couples Office 365 with Windows 10 security and device management, can now more easily capture and corral an organization’s employee information and turn that collective data into a valuable digital asset, Nadella said. This kind of data synthesis will encourage a new culture of work and help “unlock the creativity in every person inside a business, creating dynamic teams while ensuring there is still simplicity of infrastructure,” he said.

To demonstrate the possibilities, he led a presentation about Ford Motor’s HoloLens pilot. Ford has been using the self-contained holographic device, which taps virtual reality so that remote team members can collaborate via Office 365, in its design phase. Traditionally, Ford teams have developed and evolved their vehicle designs based on heavy clay models that they ship around from location to location.

Using HoloLens, Ford need not send its clay models from site to site for evaluation by different groups. Instead, everyone on the team views them virtually and can even make virtual design suggestions that can be shared in real time — say try on a series of front grill types without having to prefabricate all the options in clay.

Microsoft’s built-in security protocols mean that only vetted participants can gain access to these augmented-reality experiences.

During the demo at Ignite, Microsoft Teams Product Marketing Manager Raanah Amjadi used a mobile phone to securely join one of these virtual product reviews, which was broadcast on the big screens at the conference. The review participants were able to draft notes to each other and quickly see how changes to different parts of the car affected its design. In one example, different placements of possible rearview mirrors displayed the affect on the possible virtual field of view from the driver’s seat.

To Quantum Computing and Beyond

Toward the end of the keynote, Nadella welcomed a panel of experts who Microsoft has gathered to drive quantum computing from research to real-world applications. This work is being done at Microsoft Quantum – Santa Barbara (Station Q). The lab has been exploring the mathematical theory and physical foundations for quantum computing with the goal of building a scalable, fault-tolerant, universal quantum computer.

The Team’s work is led by Michael Freedman, director of Station Q. He was joined at Ignite by Leo Kouwenhoven of the Quantum Transport Group at the University of Delft, The Netherlands; Charles Marcus, head of the Center for Quantum Devices at the University of Copenhagen’s Niels Bohr Institute; and Krysta M. Svore, principal research manager of quantum architectures and computation at Microsoft Research.

The group discussed ongoing work in developing hybrid superconducting and semiconducting devices, quantum algorithms, and quantum computing platforms. The lab team has built the first topological qubit, which it expects to serve as the building block for a scalable quantum computer.

Nadella said that when the lab’s scalable quantum computer finally becomes reality, it should be capable of modeling nature and thus can help solve critical problems such as world hunger and climate change.