Not every small business is going to adopt cloud technologies. But many are, and Dell Technologies thinks it has the right tools to help them.

Public cloud spending is expected to grow at an annual rate of 19.4 percent in the next few years, from about $70 billion in 2015 to more than $141 billion by 2019, according to data released earlier this year from IDC, TechTarget reports. Large companies and enterprises will spend more than $80 billion on public cloud in 2019, IDC predicts, but small and medium-sized businesses will contribute 43 percent of the total, or $61 billion, in 2019.

At the Dell EMC World conference in Las Vegas this week, Dell Technologies executives said that they see the SMB market as being ripe for continued cloud adoption.

SMBs Are Taking Advantage of the Cloud

“For the first time, we have all the layers that can be consumed at a component level or all the way into a complete, integrated solution set,” he said. VMware offers private cloud solutions and can also easily connect customers to public clouds, including Microsoft Azure, Google and IBM.

Throughout the week, Dell executives — from CEO Michael Dell on down — have repeated a mantra that cloud is not a place, but instead a way to get things done. “Truly, it is this automated operational environment that is not any ‘place’ anymore,” Gelsinger said.

Gelsinger said some SMB customers really view cloud as “I’m just not at scale. I’m not going to run data center infrastructure going forward.” He said there are some customers who clearly feel that way, but “not a consensus by any means; particularly as you get outside of the U.S., it’s less so.”

However, he added that it is exciting for VMware to be under the Dell technologies umbrella because the SMB market “is such a powerful go-to-market” focus for Dell.

“We get to take technologies into those spaces as we never were able to before,” he said, prior to last September’s merger between Dell and EMC.

Gelsinger said that cloud adoption among SMBs is driving “a lot of the end-user computing technologies.”

Small businesses are “virtualizing desktops and clients in different ways, so that they can start separating themselves from unique bindings,” that tied end-user devices and experiences to specific infrastructure.

In certain industries, Glesinger said, cloud adoption is “just never going to happen. They are going to remain very tied to their data center infrastructure for decades to come,” especially in highly regulated industries.

Rodney Rogers, CEO of Virtustream, another Dell Technologies brand that focuses on mission-critical applications primarily for enterprises, said that the SMB market is going to be segmented.

“When you think of the public cloud, you immediately think of ‘scale out’ applications and servicing those applications,” he said. “Within the SMB space, there will be that, but there will also be a fairly significant swath of that segment that will actually be lower-scale ‘scale up’ apps.”

‘Scale out’ refers to scaling horizontally, or adding more computers (nodes) to a distributed computing network. ‘Scaling up’ means adding computing or memory resources to a single computer in a system.

Rogers said that Dell is looking to deploy “hyperconverged appliances that are affordable” to SMBs. “It’s ultimately going to be creating a deployment that services a very specific segmentation use at scale, leveraging the Dell channel,” he said.

Dell EMC President David Goulden said on the panel that the VxRail system offers “a lot of horsepower” and storage, and an entry-level price point of $25,000, which is in reach for many SMBs, he argued. “We’re talking about something that an SMB can absolutely [obtain].”

“It’s not a complicated spreadsheet to figure out what it would cost them to deploy that,” he said.

Compared to buying separate compute, storage and networking equipment, or renting from a public cloud, Goulden said the hyperconverged solution would be more cost-effective for SMBs. “If you’ve got to try and rent the same capability in a generic cloud, that spreadsheet looks pretty good for the on-premises solution,” he said.

With SMBs, Goulden said, Dell EMC finds the deployment cycles are much faster.

“Customers are much more willing to experiment,” he said. “They certainly don’t have mainframes. So they don’t have that problem to deal with. They’re not trying to link back to mainframe environments and the databases and storage and things like that. They just go quickly. And it’s very refreshing.” 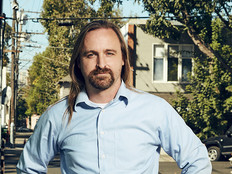