Microsoft CEO Satya Nadella said that the software giant wants to bring the power of artificial intelligence to as many users of its products and services as possible, so that they can be productive and solve problems in their respective industries.

Nadella made AI the centerpiece of his discussion of Microsoft’s technology vision during a keynote on Monday at the company’s Ignite conference in Atlanta. Microsoft also made numerous announcements about how it is baking intelligence into a variety of its products. The Microsoft chief made clear that the company views the computational power behind AI, and the neural networks that serve as the basis of machine learning, as tools to be used to improve the world and economy.

In what was perhaps a veiled criticism of rival Google, whose DeepMind artificial brain earlier this year beat a world-class champion in the game of Go. “We are not pursuing AI to beat humans at games,” Nadella said, according to Geekwire. “We are pursuing AI so that we can empower every person and every institution that people build with tools of AI, so that they can go on to solve the most pressing problems of our society and our economy.”

Microsoft used Ignite to preview new skills for its personal digital assistant and AI agent Cortana, including health insights and reminders, and the ability to connect it to bots that can help users in a variety of industries, including transportation, social media, and financial services. Cortana is built into Windows 10 devices, including PCs, notebooks, tablets and smartphones.

Meanwhile, Microsoft said Office 365 is getting new cloud-based intelligent capabilities, including Tap in both Word and Outlook, which uses the Microsoft Graph to make it easier to incorporate content from existing documents within an organization into a user’s own documents and emails. Another new feature is Quickstarter for PowerPoint and Sway, which provides curated outlines for any topic, including text and images, that can be used as a starting point to build presentations. Yet another feature is Microsoft MyAnalytics (formerly Delve Analytics), a personal analytics service in Office 365 that helps users understand how they spend time at work.

Further, VentureBeat reports: “Microsoft will incorporate a mobile-friendly ‘relationship assistant’ into its Dynamics customer relationship management (CRM) software. This assistant is designed to recommend actions for salespeople to take.” The feature will ship in November, Nadella said.

“There’s one real problem, which is [that] most sales activity happens outside of a CRM system, and so the goal of intelligence is to be able to reason about your sales data model not just inside your CRM system, but outside,” Nadella said.

VentureBeat adds: “Data can come from a variety of places — LinkedIn, the web in general, or work email — and this feature reduces the need for copying and pasting. The assistant will also notify salespeople about things happening in Dynamics that they need to know about and take action on.”

Microsoft Lays Out Its AI Vision

Nadella said all of these new tools are designed to help users.

“It’s never about our technology. It is really, to me, about your passion, your imagination, and what you can do with technologies that we create,” he said, according to Geekwire. “What societal problem, what industry will you reshape? That is what we dream about, what we’re passionate about. We want to pursue democratizing AI just like we pursued information at your fingertips. But this time around, we want to bring intelligence to everything, to everywhere, and for everyone.”

Microsoft wants to use AI that spans agents like Cortana; applications like Office 365 and the SwiftKey keyboard that can predict what users will type; services like the Cortana Intelligence Suite; and infrastructure like its Azure cloud platform, TechRepublic notes.

“Today, we look at people who have the capability we do,” Nadella told Fast Company after the keynote. “There’s one or two — there’s a Google, there's a Facebook. Some we compete with, some we partner with. Each of these companies has AI, but what do they do with it? Even if we make the same choices about categories, our approaches will be different.” 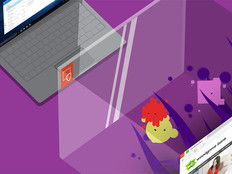