Most small businesses are focused on the nuts and bolts of the IT needed to run their companies, including networks, cloud services and PCs. However, there are many emerging technologies that will likely have large impacts on how businesses are run in the years ahead.

The consultancy PwC recently released a report highlighting what it calls eight tech “megatrends” that it thinks will have a large impact on businesses in the next three to seven years. The trends include artificial intelligence, augmented reality, blockchain technology, drones, Internet of Things, robotics, virtual reality and 3D printing. Some of them, like IoT, have been around for years and are already widely used, while others, like virtual reality or the use of blockchain for ledgers and transactions, are rapidly maturing.

Vicki Huff Eckert, PwC’s U.S. and Global New Business Leader, says that while large enterprises will likely drive much of the investment in these new technologies, small businesses are availing themselves of the same solutions, and in some cases are probably going to adopt them more readily. She says three of the technologies in particular — AI, augmented reality and drones — show strong potential for small businesses.

As PwC notes, AI is an “umbrella” term with many aspects to it, some of which are more likely to be used by businesses than others. One potential aspect is machine learning, which “focuses on the development of programs that can teach themselves to learn, understand, reason, plan, and act (i.e., become more ‘intelligent’) when exposed to new data in the right quantities.”

Anand Rao, U.S. innovation lead for data and analytics at PwC, wrote in a blog post for tech news site Recode that PwC sees AI as a continuum that involves three kinds of AI: assisted intelligence, in which “AI has replaced many of the repetitive and standardized tasks done by humans”; augmented intelligence, “where humans and machines learn from each other and redefine the breadth and depth of what they do together”; and autonomous intelligence, where “adaptive/continuous systems take over in some cases.”

“As enterprises contemplate the introduction of AI across their functional areas, it helps to clearly articulate which stage of AI you are aiming for — are you merely automating repetitive tasks and providing assisted intelligence?” Roa writes. “Are you fundamentally changing the nature of work by having humans and machines collaborate with each other to make decisions with augmented intelligence? Or are you delegating all decision-making with autonomous intelligence?”

AI is clearly coming into the workplace; it’s just a question of how and when. Last month Microsoft agreed to acquire Genee, a “smart” scheduling app, and it may bring AI into its Office 365 offering and other digital products.

Eckert told BizTech that AI allows business processes to get automated, and that different algorithms can be used to create customized workflows and environments. That will free up employees’ time and change how work gets done, she says.

“You will have employees starting to collaborate and think differently about what they are capable of,” she says. “I view it personally as a productivity lift. Employees will be able to ask broader questions and do more thorough analysis.”

Augmented reality involves bringing additional digital information or visuals and overlaying those onto a user’s view of the physical world through a headset or a mobile device, in order to enhance a task or experience.

Eckert says that AR can improve productivity in a variety of settings. DHL, the large logistics company, last year successfully carried out a pilot project testing smart glasses and AR in a warehouse in the Netherlands. Staff members were guided through the warehouse by graphics displayed on the smart glass to speed up the order preparation process and reduce errors. The pilot resulted in a 25 percent efficiency increase during the picking process.

While still evolving, Eckert says that AR can be used in similar situations by small businesses in their factories, warehouses and facilities. “You have a different level of effectiveness happening within the warehouse,” she says.

Vinod Baya, director of PwC's Center for Technology & Innovation, wrote in a PwC blog post that “deskless workers,” such as field technicians in an oil field, maintenance workers and factory workers in manufacturing, “all depend on their hands being free to accomplish tasks” and that PCs, notebooks and tablets “that serve deskbound workers well come up short for deskless workers, since they fail to facilitate hands-free interaction.”

While the AR device market is fragmented right now, Baya says that “innovation is robust and progress is rapid,” and that smart glasses may serve as a way to aid these deskless workers and deliver AR solutions. “Their appeal stems from the fact that they are wearable, much like eyeglasses, and are also hands-free, thereby allowing a user to be engaged with the real world for doing work,” he says.

Drones Could Help with Monitoring

A PwC report notes that drones can be used in a wide variety of industries: monitoring infrastructure and construction; assessing insurance claims; carrying banners for advertising; supervising crops and analyzing soil in agriculture; providing security monitoring for facilities; and more.

Drones can be used for specific use cases for small business owners. A man in the Detroit area uses drones to shoot overhead videos of luxury homes for real estate agents, for example, according to the Detroit Free Press.

Eckert says that the “next piece is data platforms” when it comes to drones, as businesses take the data drones collect and analyze it to make more informed decisions.

Investment in the tech megatrends will come from both small and large companies, according to Eckert. “There’s a value for big guys investing because it puts more money into the ecosystems of these technologies,” she says.

However, of all of the tech megatrends, Eckert says that “small business can absolutely adopt these technologies and will play a role in their evolution.” 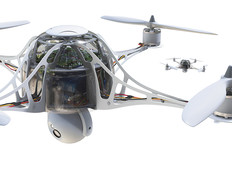