Imagine putting on a virtual reality headset and being transported instantly to an active refugee camp half a world away. Shawn DuBravac said he has seen people do so, and that it brought them to tears.

DuBravac, chief economist and lead technologist at the Consumer Technology Association, said on a panel at this week’s 2016 Social Innovation Summit in Washington, D.C., that VR technology can transport people to the sites of earthquakes or natural disasters. The experience, he said, could drive people to volunteer or donate money, supplies or services to help those affected by tragedies.

“I think we’re going to see that technology will reintroduce empathy in the world,” he said on the panel, titled “Harnessing Technology to Drive Social Impact.”

Paul Arnpriester, CDW’s national business development manager for global strategy and nonprofits, moderated the panel and said that government agencies, non-governmental organizations and companies “can help drive social change and innovation if we can only connect the dots.”

Wayan Vota, senior mobile advisor at TechLab, the technology innovation team at FHI 360, a nonprofit human development organization, said there is a notion that technology companies are more innovative merely because they are tech firms, and that as a result they have a greater ability to drive social change. For example, he said, Facebook executives often argue that merely by connecting people through a social network they are doing good.

He also noted Google’s informal motto of “Don’t be evil,” and said social innovation should spur organizations to the connect the dots, and ask, “How can we be good instead of ‘Don’t be evil?’”

Maria Arancha Díaz-Lladó, sustainable innovation director at Spanish telecom giant Telefónica, said that nonprofit organizations are well aware of how the digital revolution underway, especially the adoption of smartphones, is changing how the world works and people live. “Extremely difficult problems are now addressable through technology,” including environmental and social problems.

Meanwhile, DuBravac added that communications platforms like Facebook and Twitter can drive social change, but that technology solutions can have a direct impact as well, such as using drones to deliver vaccines to remote villages. “I think we’re going to see those types of solutions be more heavily utilized in areas where these problems exist,” he said.

Corey Marshall, director of Splunk4Good, the arm of open data software firm Splunk that works with nonprofits, argued however that technology is, in and of itself, not a solution, but an enabler and an accelerator for social good. Vota countered by stating that nonprofits should be careful in assuming that technology is always a positive accelerant and catalyst, since tech tends to accelerate what is already happening and could increase economic inequality, for instance.

Arancha Díaz-Lladó noted that Telefónica’s foundation is the largest NGO in Latin America and has a great deal of power to engage in philanthropy, but that many similar corporate foundations often limit their philanthropy if the company’s finances weaken. She argued that companies that incorporate sustainability and address social or environmental problems “are the ones that are going to thrive in the future. I think there is profit in it.”

Arancha Díaz-Lladó noted that in Spain last year, she pitched the company on launching a private TV service that would add accessibility features for customers with hearing and visual impairments. However, other executives told her that it would cost too much, even though 2 million of Spain’s 43 million citizens could benefit from such a service. Arancha Díaz-Lladó launched a pilot project with a solution created by a local university and made premium content accessible using audio descriptions, subtitles and sign language. The innovative service has proven to be successful, she said. “We are addressing a huge problem at the same time that we are making a profit,” she said.

The Promise of Open Data

Open data initiatives also hold promise to drive social change, said Samia Melhem, global lead for digital development at the World Bank Group. For instance, she said, NGOs and government agencies around the globe could digitize data (from paper and spreadsheets) about the location of schools, different kinds of crops, waterways, government buildings and other points of interest, then put that information into digital maps.

Marshall said open data is “probably the single most impactful thing we could do.” He said that nonprofits should not focus on just providing people with maps or pre-processed visualizations but go back to the sources of data and let people create applications to help with disaster response and relief, for instance.

“The technology exists. We just can’t get access to all of that source information to leverage it,” he said.

DuBravac added that there are smartphone apps that allow people to input the local market price of goods and that data is then aggregated and tracked. That could be extended to things like logging the number of vaccines available in a town. “Then it all becomes digitized and easily disseminated and analyzed. We need to be looking beyond the digitization of the information that we think is held at some government level and driving down to the individual,” he said.

Arancha Díaz-Lladó argued that government regulations are behind the technology and often inhibit the sharing of data because of privacy regulations, even when data is aggregated and encrypted. However, TechLab’s Vota warned that companies like Google and Facebook harvest huge amounts of data and that the world should consider a model in which data is considered a sovereign asset like oil. Companies, Vota said, need to pay countries and their citizens for getting access to it.

“If data has value, let’s give that value to the people who have the data,” he said. 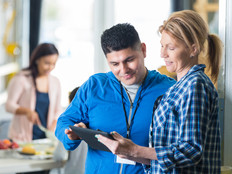