The next thing in cloud computing? Supercomputer strength.

Produced with scientists and engineers in mind, as well as enterprises relying upon Big Data to inform decisions, the HC-series VM is expected to increase efficiency in research and productivity in public cloud environments. Starting at $581 a month, Microsoft also intends for its latest option to be one of its most affordable.

From a specs perspective, HC-series VMs feature Intel Xeon Platinum 8168 processors to maneuver AVX, AVX2, and AVX512 clock frequencies from the Intel Xeon Scalable first-generation family. The VMs also expose 44 nonhyperthreaded CPU cores and 352 gigabytes of RAM, with a base clock of 2.7 gigahertz, an all-core Turbo speed of 3.4 gigahertz, and a single-core Turbo speed of 3.7 gigahertz. They include a 700-gigabyte local NVMe solid-state drive and support up to four managed disks. 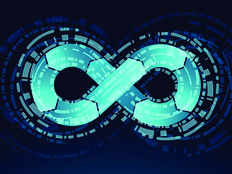