CIOs are well acquainted with digital disruption brought on by an onslaught of new technology, customer demands, and digital-native insurgents threatening to steal market share. But the maturation of cloud technology — most notably a new generation of technology platforms and management tools for hybrid clouds — offers IT managers a way to cope with fundamental change and quickly roll out new business services.

The cloud computing market has delivered a number of recent innovations, and smart IT managers are finding ways to capitalize on them for hybrid-cloud migrations.

Reactions to digital disruption and other trends are fueling these growth rates. As business units require the delivery of new services on tighter implementation schedules, the role of IT teams is changing into an internal provider of the capabilities enterprises need to stay competitive.

With a solid hybrid-cloud plan in place, IT staff can choose the right mix of on site and cloud resources, often directed by self-service portals, so that business users can dial-up applications, virtual machines and storage capacity to meet changing requirements.

Hybrid clouds also support bi-modal IT environments used in many digital transformation efforts. In this model, enterprises deploy a Mode 2 that establishes new services separately from existing IT environments. This avoids ripping and replacing on-premises resources that retain value, while enabling enterprises to modernize in ways that can add value to the organization. These new services are often available via the cloud.

Even the more traditional resources in Mode 1 can benefit from cloud services. For example, hybrid clouds offer burst-out capabilities to address spikes in business demand or to support the testing of a new application. Load balancing for storage systems is another common hybrid-cloud use case. Companies can store the information accessed most frequently in onsite arrays for optimum performance and move less critical data to the cloud.

Business benefits such as these have spurred current adoption rates, but industry analysts say commitments may accelerate in the months ahead thanks to new technologies that make moving to hybrid clouds easier.

“What’s held some companies back in the past is the complexity of deploying the infrastructure needed to run a hybrid cloud,” says Zeus Kerravala, principal analyst at ZK Research. “Over the last year or so, more turnkey solutions and management tools have been coming onto the market to help organizations take greater advantage of hybrid cloud. Now, it’s not just running a public cloud and a private cloud in the same environment. It’s making everything appear as a single-cloud environment where enterprises can leverage the strengths and benefits of both.”

This includes tools that simplify the creation of policies for automating the transfer of content and workloads among public and private clouds. For example, VMware has developed its Cross-Cloud Architecture as a platform for creating consistent deployment models, security policies, visibility and governance for all applications, whether they’re onsite or in the cloud. The architecture is agnostic in terms of the underlying cloud technology, hypervisor or hardware platform. The capability is delivered through VMware Cloud Foundation, a new set of Cross-Cloud Services from VMware and its VMware vRealize cloud management platform.

The company describes Cloud Foundation as a unified software-defined data center platform for the hybrid cloud. It’s built with VMware vSphere and Virtual SAN, along with its NSX software-defined networking technology. Together, these technologies aid the design and deployment of hyperconverged software environments, according to VMware.

When evaluating cloud management options, IT managers should look for tools that provide visibility across the entire IT environment. “Enterprises need a single pane of glass that allows them to monitor and provision resources, and remediate problems across multiple clouds,” says Lawrence Guillory, chief executive officer of Racemi, a provider of software and services for automating server migrations to the cloud.

IT managers need to understand what’s going on in their private data centers, in public clouds and in everything in between, he adds.

Management tools aren’t the only innovations coming to market. A number of large vendors have developed new platforms for closely integrating diverse cloud environments. For example, with Microsoft’s current hybrid cloud strategy, enterprises create private clouds with Windows Server and System Center, and then connect them to the Microsoft Azure public infrastructure. The common technology used by each supports the easy flow of data and applications from one location to the other.

In 2017, look for Microsoft to release its Azure Stack, a new hybrid cloud platform that is being designed to enable enterprises to deliver Azure-compatible Infrastructure as a Service and Platform as-a Service services from their on-premises data centers. The overarching goal is to help organizations focus on strategic business initiatives rather than the upfront work of building a cloud computing platform. The platform will be sold already integrated within servers from a select group of vendors, including Lenovo and Hewlett-Packard Enterprise (HPE).

HPE says the systems will let enterprises determine the right mix of onsite and cloud services based on Azure, along with built-in security, operations management and pay-as-you-go pricing. Using the system’s portal, users will be able to access both Azure public and private cloud services to provision cloud resources, build applications and easily move them between Azure public cloud and Azure Stack running on-premises.

HPE is expanding its hybrid-cloud activities beyond the Microsoft collaboration. In September it announced plans to spin off what it considers to be noncore assets and concentrate on hybrid IT products and services. This includes the company’s software-defined infrastructure, which HPE describes as a way for enterprises to bridge their existing data centers to multicloud environments.

To learn more about how services and solutions from CDW can help your hybrid cloud deployment, visit CDW.com/cloud. 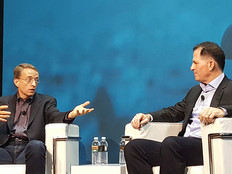