VMware executives expect business use of public cloud services to expand significantly in the next decade, and think the company's new Cross-Cloud Architecture will help during that transition, as companies use multiple public clouds. Importantly, the company’s top executives say that its Cross-Cloud Services are designed for both small to medium-sized businesses and large enterprises.

Speaking at news conferences with reporters at the VMworld 2016 conference in Las Vegas, VMware executives say that to take full advantage of the shift to public cloud services, companies need tools to operate seamlessly across those clouds in one environment with the same level of security and compliance. [Explore all our live coverage from VMworld 2016 here.]

Building Cloud Tools for Both SMBs and the Enterprise

Cross-Cloud Services, which VMware has not yet launched in the market (nor announced a timeline for doing so) will let businesses manage cloud apps running across Microsoft Azure, for example, and others running in Google’s Public Cloud, IBM Cloud or Amazon Web Services. VMware expects to add support for many more cloud services over time, Gelsinger said.

Cross-Cloud Services, which will be Software as a Service offerings, are designed to give businesses more information about their cloud app usage and costs. Cross-Cloud Services will also let companies deliver consistent networking and security policies across their different cloud services. Further, they will let companies automate the deployment, management and migration of applications and data across vSphere and non-vSphere private and public clouds.

Businesses’ IT managers and departments will be able to use Cross-Cloud Services to find, deploy and manage public cloud apps. In terms of security, companies can use microsegmentation and monitoring to provide security and compliance for applications across the different clouds. IT departments will be able to manage cross-cloud applications and deliver security and compliance​ rules to all of their cloud services, according to VMware.

During a press conference after the keynote, Gelsinger said that in a survey of about 2,000 VMware customers that the company undertook in partnership with The Economist, the customers reported using an average of eight cloud services today. “It’s a stunning realization,” he said.

“There’s a diversity of clouds across the market. And so we see that to be quite pervasive in that sense,” he added. “So as we think about the cloud offerings of Cross-Cloud Services, we believe it has to satisfy large and medium-sized customers as well.”

Raghu Raghuram, executive vice president and general manager of VMware’s software-defined data center division, noted that VMware has more than 500,000 customers, ranging from “Fortune 10” companies (the Fortune 500’s top 10) to SMBs. Raghuram said one of the reasons why VMware is launching the Cross-Cloud Services as an SaaS offering is that SaaS “tends to be more easily adopted in the earlier stages of technology,” when companies are maturing their technology. That makes it easier for small businesses to use the services, he said.

“Having said that, the requirements that we’re putting into the Cross-Cloud Services meet the needs of the enterprise — enterprise robustness, and compliance, and security, etc. etc. is applicable to customers across the board,” Raghuram added.

Guido Appenzeller, chief technology strategy officer of VMware’s networking and security business unit, added that “when we started thinking about Cross-Cloud Services, there was a real ‘Aha moment’ in there.”

Initially, Appenzeller thought larger enterprises would have more homogeneous and simplified cloud environments, but VMware found that around 70 percent of them want to use multiple public clouds. He said they don’t want to get locked into to working with one cloud services provider, but instead would prefer different partners for different geographies or performance needs, as well as to get better pricing.

“There is a desire by the customers to be in multiple public clouds,” he said. “I would argue it’s almost stronger in the larger enterprises than it is in the SMB.”

How Public Cloud Adoption is Changing IT

Raghuram said the new services have been designed to let existing VMware customers work with a familiar user interface. “Having said that, the public cloud is a very different beast. There’s a great learning opportunity there,” he said. “Our belief is that our customers will go through this evolutionary process of starting with what they are really good at and learning how to live in this new world.”

The adoption of public cloud services is also changing businesses’ IT departments, Raghuram said. “When virtualization came about we saw the rise of these virtualization admin teams, which are now becoming cloud admin teams,” he said. “The organizational model has evolved as companies have put their applications on the cloud.”

Appenzeller said that “the big disrupter here for the organization is the movement to the cloud.”

If companies really want to leverage the cloud, they cannot have their IT department be set up as siloed departments that don’t talk to each other, Appenzeller said. Businesses are still trying to figure out how their networking, security and compute teams can work together. “It’s the transformation of how IT is run,” he said.

During a press conference with Dell CEO Michael Dell, Gelsinger said businesses are starting to increasingly adopt public cloud services, “but they don’t have the tools to manage it, to network between the private and the public, to be able to deal with the security requirements, compliance requirements, to be able to migrate data and services across those worlds.”

“And that’s what Cross-Cloud Architecture is all about,” he said. “It’s giving enterprises the tools they need to take full advantage of the private and the public cloud environment.”

Since roughly three-quarters of work is still traditional IT, and hasn’t yet been transformed to an automated environment, Gelsinger said VMware has a large opening. Some of those IT workloads will be put into private cloud, some will be hosted by another hosting provider, while others will become SaaS and Infrastructure as a Service deployments. “In that, there is a huge opportunity for us to give enterprises the tools they need to really take advantage of that set of capabilities,” he said. 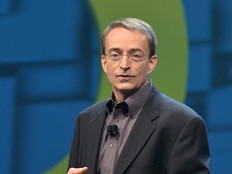 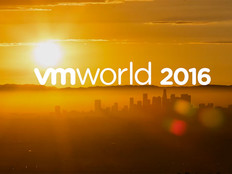 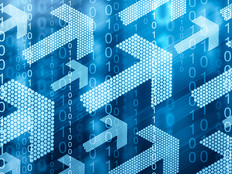