“Our guests are really interested in technology. There’s a lot competition for people’s dollars, so we want to make sure we give them what they’re looking for,” says Sam Rhodes of Six Flags.

You’re piloting a fighter jet through a futuristic cityscape, ­darting between buildings, ducking enemy fire and blasting alien spacecraft. And while you may be wearing a virtual reality headset, this is no ordinary VR experience — you really are rocketing at more than 50 miles an hour and pulling G forces nearly five times your weight.

The 40-year-old classic coaster in Valencia, Calif., is one of nine thrill rides Six Flags has married with virtual technology at parks around the country. The reason: It’s what the people want, says Sam Rhodes, Six Flags’ corporate director of design.

“Our guests are really interested in technology,” he says. “There’s a lot competition for people’s dollars, so we want to make sure we give them what they’re looking for.”

Though these are still the early days of virtual reality — and its less immersive cousin, augmented reality (AR) — it’s a good time for companies to experiment with the technology and figure out what works, says Gartner Research Director Augie Ray.

“Companies should ask themselves why they want to use it, if it fits their current goals or if it helps them achieve something they want,” he says. “If the answer is yes, then VR can be interesting for them.”

Six Flags isn’t the only place where virtual and real worlds collide. Whether via amusement rides, architectural walk-throughs or sports simulations, businesses are taking VR out of the realm of pure entertainment and putting it to work.

The Roller Coaster of the Future

Six Flags’s VR-enhanced coasters feature an ingenious blend of old and new technologies. Every rider is offered a Samsung Gear headset powered by a Samsung Galaxy S7 smartphone, Rhodes says. These are identical to models you could buy off the shelf, but the Gear has been modified to prevent the phone — and the headset itself — from flying off as the ride hits maximum speed.

All the virtual action happens in ­custom apps built for Six Flags by a German firm, VR Coaster. To sync the virtual experience to the real one, Six Flags mounted a shoebox-sized device to the front of every train. The box uses a laser to measure the rotation of the train’s wheels and the angle of the track, allowing it to determine which section of track the train is on. 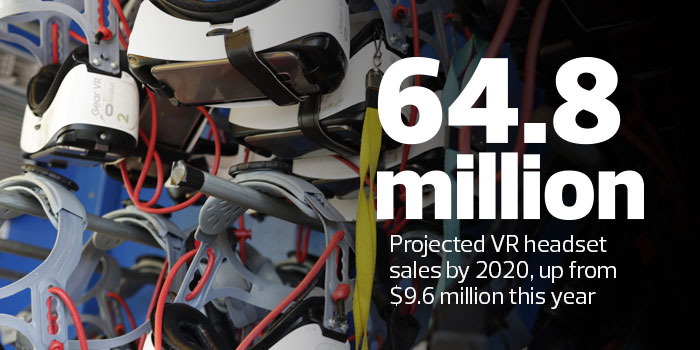 As they load riders, park employees scan a QR code on the back of each seat, which tells the system the location of each headset. The box sends that information via Bluetooth to the VR app on each phone, so it can adjust the virtual experience for every rider. For example, as the train crests a rise, riders in the front will be looking down inside the virtual world, while riders in the back will be looking up.

And while VR headsets are ­notorious for making some people feel a little queasy, the motion of the roller coaster actually lessens that ­sensation, Rhodes says.

“When you’re using VR sitting in a chair, your brain is being manipulated into thinking something is happening that really isn’t,” he says. “When you’re on the coaster, the app matches what you’re seeing to the G forces you’re actually feeling. You’re not tricking your brain anymore.”

A report this summer from Greenlight VR, the “2016 Virtual Reality Consumer Report,” shows that the public is intrigued by how virtual reality will become part of their lives. Here are the areas in which people expressed interest in trying out VR technologies.

Besides giving parkgoers more reasons to come back, VR tech lets Six Flags bring new thrills to older coasters, some of which have been around for decades. The technology even helps them design new rides, Rhodes adds.

For the past few years, he and his design team have been test-driving new rides using an Oculus headset. After ride manufacturers submit a 3D model of their latest coaster, he will go in, add scenery or special effects like fog, then take it for a virtual ride to see what actual parkgoers will experience.

“At Six Flags, we have an innovations committee with representatives from every park, and we are always looking for the next thing our guests might want,” he adds. “VR is a great opportunity to give them that.”

Taking Training to the Next Level

At StriVR Labs, virtual reality is their business. The Silicon Valley startup helps professional and college sports teams use VR to teach skills and enhance player performance during practice.

The idea has captured the imagination of coaches and players alike. In less than two years, StriVR has signed up six NFL and nine Division 1 college football teams, says Danny Belch, vice president of strategy and business development.

During practices, teams set up a custom rig of six to 10 cameras where the quarterback or a linebacker might stand, capturing the action from every angle as the players run through their scrimmage, Belch says. The video is uploaded to StriVR’s proprietary software, which lets coaches and players strap on an Oculus headset and get a 360-degree view of each play.

“We hear from a lot of players that this is the closest thing to actually being out on the field,” he says. “Usually, teams view film from either a bird’s-eye or sideline perspective. With VR, they can see a lot of different things than they would from on high.” 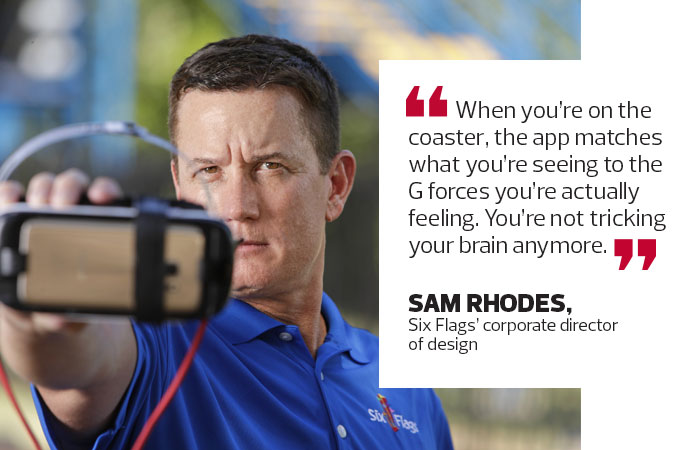 In addition to expanding to other sports — StriVR has been working with at least one NBA player to improve his abysmal free-throw shooting — the company has been focused on gathering data to correlate VR use with improved athletic performance, Belch says.

“It’s kind of crazy that what used to just be a klunky headset for games has turned into a legitimate tool to help train athletes,” he says. “If we can use VR to enhance an athlete’s pattern recognition and reaction time, we should also be able to apply it outside of sports as well.”

Building for the Future

Other businesses have used VR in less thrilling but no less useful ways. For more than a year, IA Interior Architects has been converting some of its architectural models into virtual reality ­environments, which clients can walk through using a Samsung Gear headset, says Guy Messick, director of design intelligence for the international design firm.

“We want to help clients make the right decisions at the right time,” Messick says. “There is no other way, outside actual construction, to engage at an empathetic level with an environment and its components than VR and AR.”

Putting clients inside these virtual spaces lets them see it in new ways and suggest changes they might not otherwise have thought of, Messick says. In fact, the first time the firm let a client walk through a VR simulation, the client increased its construction budget by 10 percent.

“After seeing it in VR, they realized they wanted to add a glazing system,” he says. “We realized then that people were experiencing design through VR in more meaningful ways, which not even the best renderings could match. It’s a sea change, and a permanent one.”

VR has already made a splash in the marketplace. Here are three high-profile examples.

The $59 billion hardware giant has been using virtual showrooms in a handful of stores, allowing customers to design kitchens using both the Oculus Rift and Microsoft HoloLens AR glasses. (See our story at biztechmag.com/retailtech.)

Last November, the newspaper distributed more than a million copies of Google Cardboard, an inexpensive headset that works with an Android app, so its readers could watch an ­11-minute VR film about children displaced by war.

Using the Oculus Rift, heaters and wind jets, the hotel chain took ­virtual tourists in eight cities on a whirlwind tour of a luxury hotel, a London high-rise and a Hawaiian beach. 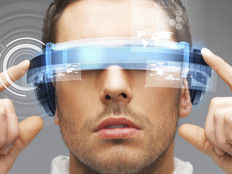