The arena is packed and on edge, as your favorite college basketball team trails by one point with only a few seconds left. Your team’s best player gets an inbounds pass at the top of the key, dribbles, catches a defender off guard, pulls up for a jump shot and sinks it as the buzzer sounds. The fans erupt in a mixture of celebration and shock.

You may not have been courtside but you were able to experience the thrills as though you were, thanks to virtual reality.

That scenario is not yet a reality, but it could be in the near future, according to virtual reality experts and college basketball officials.

Virtual reality (VR) has found a niche in professional and college sports, especially college football. Michigan’s football team has used VR to provide a richer recruiting experience, and Arkansas has used it to give its quarterback more practice time without him actually being knocked around on the field.

Brendan Reilly, CEO of Eon Sports VR, which counts a couple of college basketball teams as clients with more potentially lined up, said he thinks the VR opportunity depends on the sport and how much the technology can impact a player’s preparation or development. Eon provides VR training experiences for athletes and is developing VR content for college basketball fans.

“We’re just scratching the tip of the iceberg,” he said.

Pumping Up the Fan Experience

In February 2015 the NBA partnered with BigLook360 to film the NBA’s All-Star weekend festivities in VR, giving fans who own Samsung Gear VR headsets the ability to experience the courtside action for free. The content wasn’t streamed live but was later uploaded to the Samsung Milk VR store.

According to Jeremy Gray, associate athletic director at Indiana, the school partnered with BigLook360 to film the event, which involved more than 12,000 fans turning out for the men’s basketball team’s first practice and festivities, including a dunk contest, skits from the players and a scrimmage.

Gray said Indiana had to work through some “complicated networking issues” to get the VR content to stream to the headsets.

Indiana has no current plans to stream live games in VR, Gray said, but he added that the school has had conversations about doing so with Fox Sports and the Big Ten Network. “We are 100 percent interested in it from a program perspective,” he said.

Getting Ready for March Madness

Reilly said that Eon is working with a couple of NCAA athletic departments, one in the Atlantic Coast Conference and the other in the Pac-12 Conference, to capture content in VR and “let their fans…experience these moments and these stories that, as a fan, I want to experience.”

Eon is also exploring similar arrangements with 10 more teams, he said. The goal is to provide highlights and other experiences fans could not otherwise see.

“Even if it’s a shootaround before the game and getting to feel [like you’re] on the court, and have that sense of presence of ‘I’m standing on the court with my favorite player and coach right in front of me,’” Reilly said. “It’s like being a part of the team. That’s the best way I can describe it.”

Eon has developed a software platform to stream VR content to users’ smartphones, regardless of whether it is connected to a VR headset. Just as mobile applications drove adoption of the iPhone, exciting content will spur usage of VR platforms, Reilly said. “When we introduce these relationships [with the NCAA teams] that will be met with open arms and people will be very excited, and I think we’ll see a large adoption,” Reilly said.

Potential for Recruiting and Coaching

Another application for VR in college basketball is in recruiting. David Bradley, director of basketball operations for Duke University’s men's basketball team, noted that oftentimes recruits visit campuses in the offseason when there is not a game to watch. Currently, most teams show recruits game-day video and highlights, he noted.

“So you can take that to the next level obviously with the virtual reality technology,” he said. “You can bring them to certain places and view your gym [on a game day]. It could be really cool. I think there’s a lot of use for that.”

Yet another option is training and coaching. Indiana’s Gray said VR can give student athletes “repetitions in a real game environment and make them better react to situations when they’re playing in real games.” That could be done for not just point guards, who need to have a vision of the whole court as the orchestrators of a team’s offense, but for forwards and centers as well. “For student-athlete instruction, it’s something that we will explore,” he said.

Duke’s Bradley cited several reasons why he thinks it will be a while before VR takes off in coaching. One is that coaches already can show game film to players on 80-inch high-definition screens or iPad devices. Another is that it will be difficult to film and edit footage in VR during a busy season. Additionally, Bradley said some teams’ IT departments might not be familiar with VR. “You’d have to have a lot of in-house improvement in equipment and awareness of this technology,” he said.

Still, Duke is definitely interested in VR, especially for recruiting, Bradley said. “We’ve actually tried to film some stuff ourselves,” he said. “Right now it just takes a lot of time in trying to figure out how to stitch things together.”

The future is full of possibilities as the technology evolves, Bradley said. “We’re definitely looking at it,” he said. “I think it’s something we’ll want to have, it’s just a matter of when.”

To learn more about how technology is changing college basketball, check out the other stories in our March Madness 2016 content series. 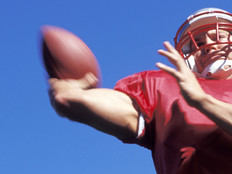