There’s been a lot of talk about change being afoot at Microsoft, and there’ve been inklings and hints of a shift in the company’s approach to non-Windows platforms since longtime CEO Steve Ballmer left the company last year.

Releasing a version of Office for the iPad was a sign of a new Microsoft, but the company’s surprise announcement last week — which saw the firm offer Office on iOS and Android for free — is the parting-the-Red-Sea moment in the company’s history. You might even say Christmas came early this year for Office-loving iOS and Android users.

Today we’re taking the next major step to bring Office to everyone, on every device, and I’m excited to announce that Office apps customers love are coming to Android tablets with the start of our Office for AndroidTM tablet Preview. We’re also delivering Word, Excel and PowerPoint apps for iPhone® and updates for the iPad apps — to ensure a consistently beautiful and productive Office experience on every device.

For those who’ve toiled away on Office alternatives on their iPhones, iPads and Android devices, this is most certainly welcome news. While there are benefits to different productivity suites, there’s no denying Office’s continuing dominance in the enterprise. In 2013, Forrester found that only 6 percent of organizations surveyed offered all or some of their employees an alternative to the Office suite.

Besides, if everyone in the office is working in Word, do you really want to be the lone wolf stuck in no-man’s land? 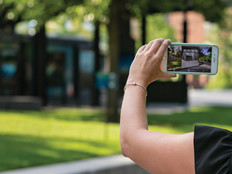