The CDW Technoliner is “easily the most technologically advanced vehicle” that West Coast Customs has ever attempted, say Scott Voinovich (left) and Ryan Friedlinghaus. 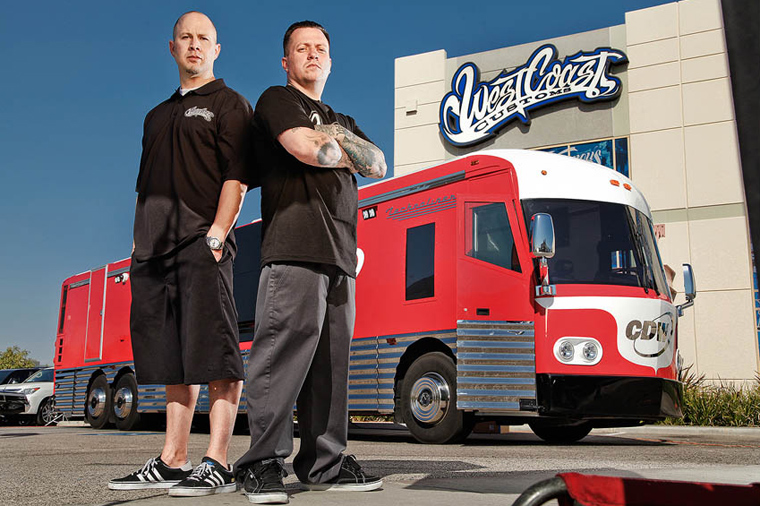 At this year’s NCAA Final Four championship in Atlanta, hundreds of buses lined the streets near the Georgia Dome — but only one was truly unforgettable. The CDW Technoliner is unlike any other. The front end looks like the prow of a spaceship; inside, the big red bus packs more technology than is found in many businesses.

This past spring, a unique collaboration between CDW and West Coast Customs — perhaps best known for the MTV series Pimp My Ride and Discovery Channel’s Inside West Coast Customs — culminated in the creation of the Technoliner. Together, the technology provider and custom automotive company took a standard charter bus and turned it into a technology showcase on wheels, driven by its own data center.

Get an inside look at the tech in the Technoliner

Now, the bus is ready for serious business: There’s the learning lounge, stocked with Elo Touch Solutions displays that run a custom CDW touch application with whiteboard features and tablets for demonstrating the technology that’s loaded on the bus. There’s also the collaboration center with more iPads and charging stations.

In between the lounge and collaboration center are a pair of glass-enclosed server closets with two full racks of gear supporting the bus’s virtualized servers and home to the Cisco Systems Connected Stadium Wi-Fi, StadiumVision and StadiumVision Mobile products — enough computing and switching power to create a small data center. There’s also a NetApp storage area network to house data.

“The Technoliner is easily the most technologically advanced vehicle we’ve ever attempted,” says Scott Voinovich, project manager for West Coast Customs (WCC). “I don’t think anyone’s ever tried to put a Planar LED on the side of a bus before, let alone six of them. How cool is it to pull up in this thing and activate the screens? It’s an instant party and information center with the push of a button.”

Don’t miss the bus: The Technoliner is on the road now. See it up close and in person..

For WCC Founder and CEO Ryan Friedlinghaus, it’s the bus’s retro-future look that he finds most appealing.

“I love the front end,” he says. “It gives the Technoliner a retro look that’s different than any bus out there. And the interior is very futuristic, from the frosted glass to the stainless steel and the lighting. That really complements the technology we put inside.”

But the toughest challenge in getting the bus on the road to the Final Four was moving from concept to a finished vehicle in just less than seven weeks, Friedlinghaus says.

“This was the biggest build we’ve ever done in that short a period,” he says. “I had my whole shop, all 28 guys, working on this thing at some point. We definitely pulled a few all-nighters, but it was worth it in the end.”

And getting there was half the fun.

How Many Racks Can You Fit on a Bus?

While the WCC crew busily converted the 2008 bus into a state-of-the-art conference facility — ripping out the interior, replacing the seats with club chairs and post-modern benches, adding a molded fiberglass front end, modifying the luggage compartment to handle an 800-pound dining area on rails — a team of CDW solutions architects and systems engineers wrestled with turning it into a mobile data center. 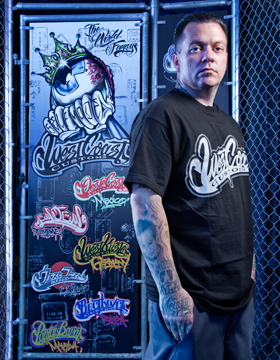 "[T]he interior is very futuristic, from the frosted glass to the stainless steel and the lighting. That really complements the technology we put inside," says Ryan Friedlinghaus, West Coast Customs Founder and CEO.

It’s one thing to outfit a data center but quite another to squeeze one into a moving vehicle and make sure there’s room left over for meeting space and passengers, says Nick Mueller, a CDW technical architect who worked on the project.

“It was like setting up a streamlined branch office,” he says. “We needed all the usual stuff — networking, Internet, wireless access points, VMware, applications — plus the ability to deliver live video to multiple screens. And we had to do it in something that was mobile.”

“The biggest challenge for us was providing enough rack space for all of the equipment and finding the right balance between uninterruptible power supplies versus line power conditioning,” adds Dan Vargas, a CDW solution architect and the team leader for the project.

Take a ride from your desktop. For a quick peek, check out this video: biztechmag.com/0213cdwbusreveal.

“It took some time to figure out how to get the racks down to size so we didn’t go over our power budget, yet still make sure we could showcase the latest cutting-edge equipment.”

Another concern was ambient heat, especially when the bus hits the road on a summer tour. To keep it cool, WCC installed four AC units on the roof, including one directly over the server closets.

Finally, there were the movable displays. The technology was solid and proven; Cisco StadiumVision–run displays are deployed in arenas around the world. But nobody knew if the six-screen external panel could survive the 2,000-mile trip from WCC’s workshop in Corona, Calif., to the parking lot of the Georgia Dome in Atlanta.

WCC and CDW finally decided to ship the Planar Systems screens separately and attach them after the bus reached its Final Four destination. Following the ­Techno­liner’s Atlanta debut, the team devised a strategy for permanently securing the screens to the vehicle without damaging them.

“There’s a lot of technology on this bus that has to be applied to a real-world vehicle that drives down the street,” Voinovich says. (See “The Highlights Reel” for more about the technology components.)

Teamwork Is Not Just for Sports

Ultimately, both the CDW and WCC crews agree that the Technoliner really shows off what technology can do. As a rolling demo lab, it offers sneak peeks at cutting-edge technology such as Cisco’s Connected Stadium Wi-Fi, which gives sports fans the ability to stream instant replays to their mobile devices or change camera angles with a tap of a finger.

But it also shows what teamwork can do — especially when trying to create something that’s never been built before, Woodfin says.

“West Coast Customs has been fantastic to work with,” he says. “They share similar values with CDW around meeting customer expectations, doing good work in difficult situations and taking on the toughest challenges.”

Voinovich concurs: “At West Coast Customs, we are open to any challenge — and this project really challenged us. A few years ago, we probably would not have been able to build this bus, nor would it have turned out as well as it did. The technology in this thing is absolutely amazing. We’re looking forward to working with CDW further as this bus goes down the road.”

How to Build One Geeked-Out Ride 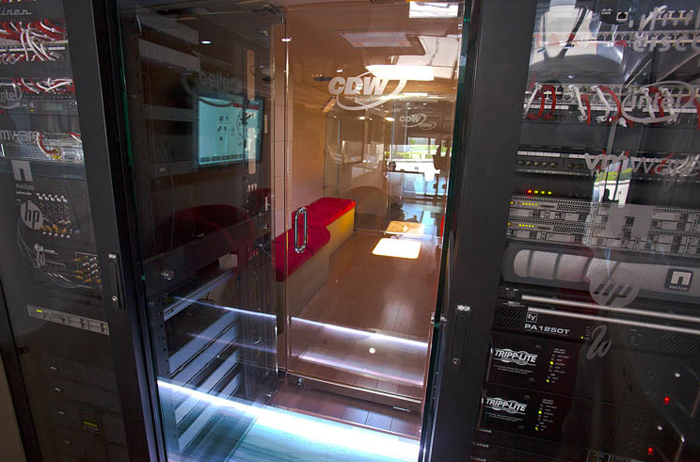 On the outside, the 48-foot-long CDW Technoliner has a liquid propane grill, pizza oven and a table for serving food that slides out from inside the luggage compartment. Big-screen Samsung HDTVs are hooked to Xbox 360s with Kinects. A satellite receiver on the roof pulls down live HD broadcasts, while the internal and external Cisco Connected Stadium Wi-Fi network pumps out the Internet to any mobile device in range, provided by AT&T 4G LTE service from a network interface card in the bus’s Cisco 2951 G2 Integrated Services Router.

But the pièce de résistance is the Technoliner’s screen. Rising on a lift six feet above the passenger side, the 13-by-6-foot video wall is actually six separate 60-inch Planar Systems flat-screen panels. Controlled using Cisco StadiumVision, the panels combine to display a single HD image — offering parking lot patrons some of the best views in the house. 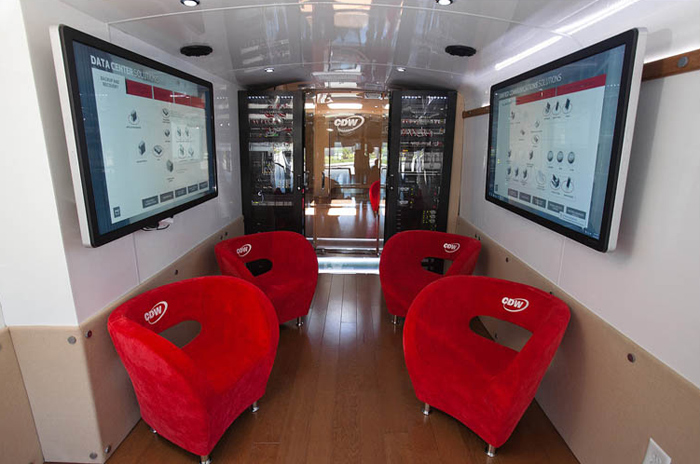 What can someone do on the Technoliner that can’t be done on other buses?