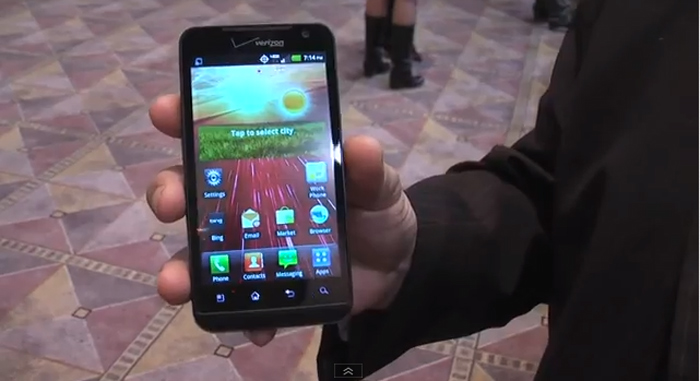 An LG Revolution with VMware's Horizon Mobile, which allows users to virtualize their smartphones to access a phone within a phone.

In the past few days at the Consumer Electronics Show, there have been thousands of product launches. In fact, it's estimated that 10 products are launched every minute at CES.

New technology is always a wonderful sight to behold, so if you couldn’t make it to Vegas, check out some of these great product demos from CES 2012.

BlackBerry shows off the new features in the second iteration of its tablet operating system, BlackBerry PlayBook OS 2.0, which is expected to ship in February.

A representative from Lenovo shows off the company's 55-inch smart TV which is integrated with the latest version of the Android operating system, Ice Cream Sandwich.

Microsoft had the latest version of its upcoming Windows 8 operating system on the floor at CES and technology blog, The Verge, got a hands-on demo of the new OS.

Samsung brings voice and face recognition technology to the television. In this product demo, Samsung shows off the possibilites of these new ways of interacting with your television.

VMware's Horizon Mobile integration with LG allows smartphones to go virtual. This is a perfect solution for companies with BYOD policies, as it allows workers to use their smartphone for both personal and business use.

Did these products impress you? Were there any other product demos at CES that blew you away?