When the fintech industry was young in early 2010s, legacy banks tended to regard the companies within it as a threat. Why should customers maintain checking accounts at a bank if they can buy dinner or pay the rent with an app? Why should they borrow from a traditional lender if an unregulated fintech can make borrowing cheaper and easier?

In more recent years, however, fintechs and banks have been forging alliances, with the former helping the latter with technology services behind the scenes that allow banks to more nimbly respond to customer demands for convenience.

“When fintechs were first on the scene, they were seen as disruptors: ‘You’re taking our customer base, you’re not regulated’ and all kinds of things,” said Nicole Elam, CEO of the National Bankers Association, which represents minority-owned and -operated banks. “But now, we’re starting to think of them as partners: ‘How can we partner with you, because we’re not going to be able to build it or buy it fast enough?’”

Elam spoke Monday in Las Vegas at Money20/20, the fintech industry’s largest annual trade show, as part of a panel on how such partnerships, particularly in the area of low-code and no-code software development, can help smaller financial institutions remain competitive.

Become an Insider to get all the latest information on financial services technology. 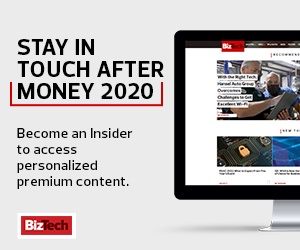 Small Financial Institutions Are Under Threat

Elam noted that the kinds of banks she represents, with minority ownership and assets under management averaging less than $400 million — “the smallest of the small,” she called them — are confronting an existential crisis. They need all the help they can get and fintechs may provide part of the answer.

“How do we get community lenders to be able to capture this next generation of customers? Consumers are changing, and it all revolves around technology,” Elam said. She added that those who can’t adapt “just won’t be around anymore.”

Low-code and no-code software platforms allow businesses to deliver new services without the need to write their own code, something few community banks have the technical or financial wherewithal to do.

“Consumer expectations are changing faster than organizations can adapt, and software developers are often the ones controlling the narrative,” said Joseph Akintolayo, CEO of Deposits, a fintech that provides Low-Code as a Service solutions to banks, credit unions and others. “What I see low-code and no-code tools doing is allowing people to get started a lot faster — allowing them to get an A/B test without the difference between A and B costing a million dollars and six months.”

Gabriel Krajicek, CEO of Kasasa, a fintech whose services are aimed at small banks and credit unions, said that people want to bank at local financial institutions, which they regard as more trustworthy than large banks, but find that the smaller banks can’t keep up with the services that big institutions can provide.

“There’s inherent trust with community financial institutions,” Krajicek said. “We’ve all seen It’s a Wonderful Life. What they don’t have is any technology people. The technology team at a community financial institution with maybe $500 million to $1 billion under management — the CTO is an integrator, an IT guy, and so they buy their technology and then try to integrate it. And they buy it from one of several companies that aren’t really investing in the upkeep of their solutions.”

That limits what community financial institutions can do. For example, Krajicek said, he asked a group of 65 such CTOs at a recent presentation what it would take for them to be able to offer their customers access to funds from direct deposit a day or two sooner, a service that large banks are increasingly touting. “They said it would be impossible; they just couldn’t do it. So, I see low-code and no-code as being a solution for those kinds of problems.”