Financial services firms indicated a great interest in public cloud in a recent survey conducted by Thomson Reuters. The survey findings follow predictions that more financial institutions would embrace public cloud thanks to the reliability and scalability of cloud providers, as well as enhanced cybersecurity.

Thomson Reuters surveyed 250 senior IT executives at financial institutions and published the results in July. Survey responses revealed that firms would increase their spending on public cloud to represent 47 percent of their budgets in 2019, up from 30 percent in 2017.

“Given the sensitive nature of many of their data requirements and the regulatory pressures they face, financial firms have been quite cautious about exploiting public cloud compared to other industries, but these findings show that financial firms are accelerating the cloud plans,” says Brennan Carley, Global Head of Enterprise Proposition and Product for the Financial and Risk business at Thomson Reuters.

The Thomson Reuters findings echo conclusions in a paper by the Depository Trust & Clearing Corporation, Finextra reports. The DTCC concluded that cloud computing provides value that shifts the debate on sustaining individually owned and managed data centers. In many cases, the capabilities and security provided by cloud vendors has surpassed those that companies can provide onsite, according to the DTCC.

Only last year, Ranjit Bawa, principal and U.S. technology cloud leader at Deloitte Consulting, noted that financial services companies have been traditionally reluctant to embrace public cloud services. “Financial services, after all, is a highly regulated industry requiring strict IT security and privacy controls. As recently as a few years ago, public cloud providers were generally unable to provide these assurances on the timetable and scale often demanded by businesses,” Bawa writes in The Wall Street Journal.

But Bawa stresses that public cloud providers have become adept at responding to regulators and helping companies grow internationally with on-the-ground footprints in other countries as well as a familiarity with foreign regulatory requirements. Thanks to such developments, institutions like J.P. Morgan expressed confidence in the public cloud, introducing plans for two applications to run on public cloud in 2018. Capital One and regional banks led banking firms into the public cloud as well.

While financial institutions are still reluctant to move their back-end operations to public cloud providers, they will undoubtedly do so in the future, Bawa concludes.

“In the past few years, most modern cloud vendors have matured considerably, establishing better security, privacy, and compliance controls for cloud applications,” Bawa writes. Cloud providers have relied upon automation to reduce manual errors and they have bolstered cybersecurity and compliance in the cloud, providing more assurances than banks can do with private data centers.

MORE FROM BIZTECH: Discover how AI will challenge small banks to innovate!

Steve Randich, CIO of the Financial Industry Regulatory Authority, recently told Forbes that commercial firms could not possibly invest the level of resources required to match the “cybersecurity controls of a public cloud vendor.”

In an interview, Randich says FINRA processes as many as 50 billion transactions a day, and a few years ago, it began to rely upon public cloud platforms to handle a lot of data efficiently.

“Today, those efforts are largely completed, and we are now moving into machine learning and advanced analytics. This will enable machines to do more of the surveillance, which allows our surveillance analysts to avoid the work that is better suited for the machines,” Randich says.

The demand for public cloud is reshaping the IT industry, as seen in the recent IBM acquisition of Red Hat. SiliconAngle says that IBM was driven by “lackluster revenue growth in its own public cloud offerings” to make the transaction, which is expected to close in the latter half of 2019.

“Both firms face significant challenges positioning their hybrid cloud offerings in a market that is increasingly dominated by the top public-cloud providers,” SiliconAngle says. 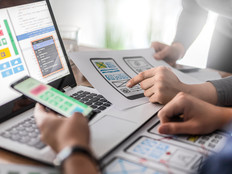