Most PCs, even those that are a few years old, have enough horsepower to get through the average user’s day. But users may find themselves frustrated by an older PC if its performance starts to degrade quickly.

The most effective way to enhance an older system is to replace its aging hard-disk drive with a new solid-state drive, such as the Crucial MX300 SSD. While HDDs are more affordable, a 1-terabyte or 2TB SSD is not terribly expensive for what it offers: up to 10 times the performance of an HDD in both sequential read/write and input/output operations per second. Boot time for Windows can decrease by a factor of three or four, dropping from more than 60 seconds with an HDD to about 15 seconds with an SSD. 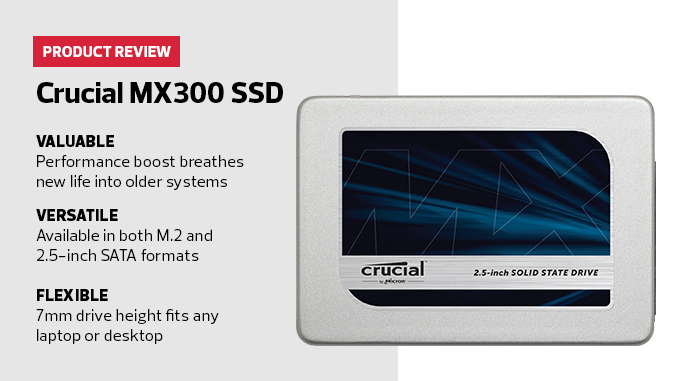 The Crucial MX300 Offers an Easy Transition to a Faster PC

The SATA version also comes with an adapter to ensure a snug fit in laptops built for 9.5-millimeter drives. For desktop systems that don’t include 2.5-inch drive mounting cages, a bracket can be purchased for less than $10.

In addition to the drive itself, the MX300 comes with Acronis True Image HD software for easy data ­migration. With True Image, an existing system can be moved from the old HDD to the new SSD in less than an hour. The two drives don’t need to be the same size; the software can handle a larger or smaller drive, as long as there’s enough space to hold all the files on the old drive. All that’s needed is a second SATA connection for the new drive, or a USB-to-SATA adapter to temporarily connect the new drive via a USB port until the files are transferred.

Once the True Image software finishes transferring files, the user simply replaces the old HDD with the new SSD, and after a reboot, the PC should run much faster. The MX300 offers a simple, inexpensive way to substantially upgrade a PC’s performance. With the new SSD in place, systems will boot up and software will load four to 10 times faster, and finding files through the OS or applications such as Outlook will be speedier too. Plus, encryption support ensures that if a l­aptop or PC is stolen, the data can’t be accessed without a password.