This is not your father’s Kentucky Derby. It’s probably not even yours from 10 years ago.

On May 5, tens of thousands of fans will pack Churchill Downs to watch a field of 20 horses race in the 144th running of the Kentucky Derby, otherwise known as “the most exciting two minutes in sports.” Millions more around the world will watch the spectacle on television.

Technology is seeping into how fans experience and bet on the race more than ever before. The city of Louisville, Ky., is using technology to keep Derby patrons and city visitors safe via an alert system. And there’s a new technology wrinkle in Derby betting this year, with the use of blockchain-based bitcoin becoming more popular, according to online horse racing betting service US Racing.

As StateTech reported last year, to keep the crowds safe during the event, the Louisville Metro Police Department has implemented several pieces of new and innovative technologies for its Real Time Crime Center, with the centerpiece being its video surveillance of the city.

Last month, the city noted that Louisville Metro Emergency Services is offering a text message alert system for residents and visitors coming to the city for the Derby. LENSAlert, the Louisville Emergency Notification System, offers a text message sign-up which will provide event-goers real-time notifications in the instance of an emergency. The city set up the LENSAlert system in 2016.

To sign up for notifications for any event throughout the Derby season, patrons can text “Derby” to 67283. Should an incident occur, Louisville Metro EMS will send text message notifications from MetroSafe, Louisville’s 911 communications center. MetroSafe stays in constant communication with the Incident Command System, the Emergency Operations Center, first responders and LMPD’s Real Time Crime Center. It maintains a high level of situational awareness during all events.

“We expect a safe and secure Derby Season and are doing everything we can to be prepared, including offering text alerts for the public,” Emergency Services Director Jody Meiman says in a statement. “LENSAlert is meant to communicate emergency information only and will be the trusted source of information should a major incident occur.”

Alerts will only be sent out for true emergencies, WDRB.com reports. “If we had a hazardous material for some reason in that area, then that would be something,” Jody Duncan, a spokesperson for Louisville Metro EMS, tells the site. “If, in fact, there were some sort of active shooter situation. If there was any severe weather emergency.”

Now, horse racing bettors, or punters, are increasingly using cryptocurrencies to place bets on the race, US Racing says. “Right now, while punters are limited to a handful of private international gaming companies that will accept deposits with crypto currency, players with crypto wallets can use Bitcoin, Bitcoin Cash or Litecoin to make a deposit and bet on the Kentucky Derby,” Tim Maxwell, operations director of US Racing, says in a statement.

Both the legality and associated risk management of accepting cryptocurrencies “needs further clarification before we see widespread adoption in the gaming and racing industry as a whole,” Maxwell says. “The violent swings in bitcoin prices can add another layer of risk management that some public companies believe do not justify the added convenience for providing this deposit method to [their] customers.”

Indeed, as SportTechie notes, “A typical $2 bet made — and paid out — in Bitcoin could gain or lose value the moment it’s placed, leading to potential wins or losses for betting companies regardless of the result of the race.”

Maxwell says he expects a “handful of publicly traded UK, Maltese and Canadian gaming companies” to accept bitcoin deposits on a trial basis by next year and for land-based racebooks and casinos to follow suit shortly thereafter in late 2019 or early 2020.

The Associated Press reported May 1 that Justify, Mendelssohn and Magnum Moon are the top three picks for this year’s race. 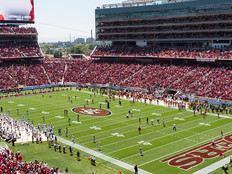 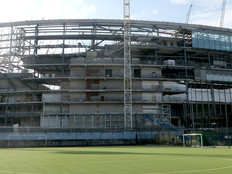