The new Microsoft Surface Pro continues to make innovations within Microsoft’s line of tablets, enhancing many of the features of the Surface Pro 4 while also shaving a bit of weight from the already sleek form factor.

Microsoft chose to remove the model numbers from its nomenclature, so although this is the fifth model in the line, it and all future units will simply be known as Surface Pros — and then further identified by their core components. The new Pro may look almost identical to the SP4, but it has more than 800 new parts packed inside.

It’s also built for silent running. Those 800 new parts do not include cooling fans on models with processors up to the Intel Core i5. Instead, when you boot the Surface Pro, you don’t hear anything at all — making it a perfect tool for noise-sensitive environments such as classrooms, cubicles and lecture halls.

The new Surface Pro has a visually stunning display, with a 12.3-inch touch-screen PixelSense LCD that offers native resolution of 2,736 by 1,824 pixels. The screen is configured into a 3:2 aspect ratio with a dense 267 pixels per inch for rendering precise graphics and photographs.

The new Surface Pro display also takes a page from the much larger Surface Studio and includes an enhanced color mode that makes everything pop off the screen using PixelSense Accelerator technology. Enhanced images look amazing for film or games, but they’re not as accurate when compared with source colors. Users can switch from enhanced mode back to standard red, green, blue on the fly, so they can choose the mode that works best for each application.

The internal power supply of the new Surface Pro takes up much of the interior space, delivering longer battery life. Microsoft improved battery life beyond last year’s Surface Pro 4 — from eight hours and 47 minutes to more than 13 hours — while also reducing the unit’s weight.

Even the famous kickstand has gotten an upgrade. It now rotates a full 165 degrees and can hold its place to support the unit anywhere along that arc. Pushed all the way back, the Surface Pro can act like a drafting or drawing table to support creative endeavors.

It’s been a long road for the Surface Pro line, which had reached what we thought was a high mark for portability and power with the SP4. But Microsoft has improved the line significantly with its latest offering.

The new hardware features of the Microsoft Surface Pro are impressive, but Microsoft has also improved user inputs, as well as the software that supports them.

The new Surface Pen is a joy to work with. You can’t detect any lag when taking notes or writing on the screen, in large part due to the PixelSense Accelerator technology brought over from the Surface Studio devices. Artistic users will find that the pen responds accurately to differences in pressure and speed, much like using a calligraphy pen or even a paintbrush on canvas. It also responds to tilt and shading like specialized artist tools.

For software, the Surface Pro comes standard with the new Windows 10 Creators Update, which adds new tools such as 3D designing and inking. The pen also has been optimized for use with every Office 365 program, whether working creatively, putting together a business proposal or just taking notes in class.

The tablet even has a brand-new app called Microsoft Whiteboard that launched with the Surface to help foster collaboration. It enables multiple users to share a single image on their screens, add information and work within the shared environment.

Even the keyboard has gotten an upgrade. In addition to coming in nice new colors — platinum, burgundy and cobalt blue — all keys are now wrapped in a proprietary luxurious Alcantara fabric. It feels wonderful on the fingers, not impeding typing but still cradling each stroke like you are pushing on tiny pillows. The fabric is also treated with a polyurethane coating to resist spills, marks and general wear and tear.

You shouldn’t judge a book or a Surface Pro by its cover, but looking inside the new model proves that this tablet is different through and through, both hardware and software. It would fit nicely into almost any environment, from business to school to government service, or even just as a fun personal device designed to improve performance and productivity. 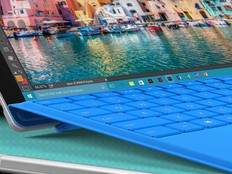 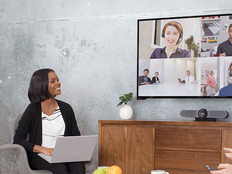 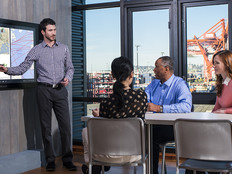