Artificial intelligence may replace some jobs, but it will also highlight the importance of human judgment in the workplace, forcing human workers to use emotional and analytical reasoning machines lack, writer Malcolm Gladwell said during an appearance at the Citrix Synergy 2017 conference in Orlando, Fla.

Gladwell — the author of several books including The Tipping Point, Blink and Outliers — pointed to a 2007 essay by Gregory Treverton, who served as chairman of the National Intelligence Council during the Obama administration. In the article, Treverton noted that puzzles are problems people solve by acquiring additional information. Mysteries, on the other hand, are problems people only solve by making sense of the information already before them. Mysteries, Gladwell said, are problems caused by “an excess of data, not a surfeit of data.”

The distinction is important, Gladwell continued, because “you have to know the kind of problem that you’re faced with if you’re going to figure out a solution to it.” More importantly, Gladwell noted that Treverton believed the world’s business, educational and governmental institutions were set up primarily to deal with puzzles, not mysteries, to gather more information.

Mystery Solvers Will Rule the Future

In the future, thanks to technology, experts will need to be mystery solvers, not puzzle solvers, and will need to be “practiced in the incredibly complex art of making sense of complexity.”

If that sounds vague, Gladwell thinks so, too. As an example, he noted that urologists now have a lot of data from prostate-specific antigen, or PSA tests, to determine if a man might have serious prostate cancer. But urologists now need to become analysts to make sense of all of the data, and the test information does not necessarily mean that they will be any better at determining if the man has cancer.

In the past, urologists would conduct exams to determine if men had lumps on their prostates — they were puzzle solvers, not mystery solvers. Doctors now need to take on not simply an operational role, but a social role, engaging in sensitive conversations with patients in order to help them make sense of confusing medical problems.

“I think that it’s fair to say that professions have a real difficulty in understanding this transition,” he said.

How Businesses Can Balance AI with Human Intelligence

As Big Data, machine learning and AI take up a larger piece of what it means to collect information, the difficulty in making the transition to a mystery-solving world becomes more problematic, Gladwell said.

As a case in point, Gladwell notes that, in the 10 years following the Sept. 11 terrorist attacks, the counterterrorism community and industry ballooned to 1,271 government organizations and 1,931 private companies. Since the attacks, in the Washington, D.C., area alone, 17 million square feet of office space dedicated to counterterrorism has been created. “When you hear that statistic, 17 million square feet of office space, do you feel safer?” Gladwell asked. “Do you feel like we have actually addressed this problem as it is? Or do you feel like we have somehow fundamentally misunderstood the changing nature of the work environment, of the problem-solving environment, of the destination of an expert in the modern age?”

As more data gets collected via software and machines, and as AI evolves and becomes more pervasive, the role of experts will need to change, Gladwell said, and they will need to “occupy what I would call structural holes in decision-making.”

Those holes are “critical points along the decision-making chain that a machine could never touch.” We need to have a better understanding of what those holes are, Gladwell said, to figure out the role of humans alongside AI.

An example of such a hole is the fact that certain teachers simply perform better when they are with certain kinds of students, Gladwell said. That idiosyncratic relationship cannot be predicted by data or test scores and requires subjective human judgment, he added.

The role of a school principal might need to change, and instead of relying solely on data and test scores to judge teacher performance and student outcomes, the principal needs to get to know teachers and students very well and figure out better ways to pair them based on their compatibility. Then, in October or November, the principal would rearrange classes to match students to more compatible teachers, Gladwell said.

People often ask whether AI will replace human beings, Gladwell said. “The answer is, no, it does not. What it does do for us is clarify what the role of human beings ought to be.”

What the world needs, he said is “people who can act socially, not just operationally. People who can be analysts and not just collectors of information. People who are comfortable with uncertainty. People who are able to have that kind of complicated, intimate, sensitive, real conversation with a parent or a patient and get that core of the problem on the table.”

The bad news is that the role of experts will get a lot more difficult, Gladwell said. The good news, he said, is that “in the future, we are not getting rid of human judgment, we are much more in need of human judgment.” 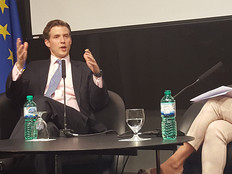