Last year, when John Snider, IT director at Peoria, Ill., law firm Heyl, Royster, Voelker & Allen, looked at his organization’s nearly 20-year-old phone system, he didn’t see just antiquated hardware. Instead, he saw a great opportunity to help the firm. “The system was, in many ways, a productivity-robbing dead weight — an obstacle to achieving peak performance,” Snider says.

Heyl Royster is a Midwestern law firm with 120 lawyers and six offices serving clients in Illinois, Iowa, Indiana, Missouri and Wisconsin. Using their old phone system, Snider says, Heyl Royster attorneys struggled with even the most basic communication capabilities. “While we had voicemail, we didn’t have features like four-digit extension dialing,” he says. “Integration with Microsoft Office was simply not possible.”

Snider knows a lot about IT hardware and software, but planning and deploying a new phone system had him moving into entirely new territory. He began his research by visiting a popular legal IT website operated by the International Legal Technology Association.

“It’s an aggregation of law firms located around the world,” he says. Snider posted a message to the site asking for comments about specific vendors and systems. “For law firms our size, ShoreTel was far and above the recommended system.”

Reaching out to Paul Gaimari, a senior account representative at CDW, Snider began investigating systems from ShoreTel, as well as two other vendors. After deciding that the other vendors couldn’t meet Heyl Royster’s needs on price, features and support, Snider selected ShoreTel Onsite, an on-premises Voice over IP virtualized communications platform that runs on industry-standard x86 servers.

“ShoreTel’s price point was a lot better, and the system seemed easier to manage,” Snider says. “We are our own system administrators, with Microsoft education, so we were looking for a telephone system that could be managed easily without a big learning curve.” Heyl Royster also acquired a ShoreTel support package that covers breakdowns, repairs, patches and major releases.

Snider says that CDW made finding the right solution comprehensive, logical and painless. “Paul worked with me through the whole process,” Snider says. “Paul was a great partner, a great resource, and we ultimately purchased the system through CDW.”

Justin Hester, a CDW collaboration specialist, says Snider’s experience wasn’t unusual. “We work with customers in an agnostic way to evaluate all the collaboration players, like ShoreTel, that are pushing the industry forward and reinventing what it means to collaborate with one another, both within the company and with their customers.”

“I’m able to look at what applications they have from a voice, video and collaboration perspective, and then help them apply the right technology to that problem or to that gap,” he says. “Then I engage a player, like ShoreTel, to help the customer.”

Snider appreciates the fact that ShoreTel and CDW treated him like a partner, not just a customer. “The one big thing that ShoreTel brought to the table, through CDW, is that I talk directly to ShoreTel engineers and ShoreTel is my support,” Snider says. “What we get through working with CDW is priceless.”

A Move Triggers a Decision

In early 2014, Heyl Royster announced it would move its Chicago office and Peoria headquarters to new, larger locations within their respective cities.

“That’s really what triggered the firm to start looking for a new phone system,” Snider says, “because we didn’t wish to replicate the old, inferior technology in the new offices.” The firm’s four other offices would also receive the ShoreTel telephone system.

“We started planning the Chicago office move in May of 2014 and then took January, February and March to plan the Peoria office move,” Snider says. A Heyl Royster IT team visited each office approximately two months prior to installation to determine the amount of physical space available in the site’s network racks, locate the Primary Rate Interface (PRI) and identify any additional network drops needed.

“Music on hold and paging had to be adapted to work on the ShoreTel system, which wasn’t a problem,” Snider says. “We also had to make sure we could provide Power over Ethernet to all of the ShoreTel phones.”

The Chicago office, with its ShoreTel phone system, opened on Dec. 22, 2014. The remaining offices migrated to the ShoreTel solution over the next few months, with companywide adoption by July 2015.

“We had ShoreTel trainers and a ShoreTel engineer onsite at every installation,” Snider says. “ShoreTel has a process for identifying and understanding all users, extensions and system features, and then making sure that the system will meet every possible need and situation.” Snider’s IT staff and ShoreTel representatives went through the analysis process a total of six times with them — once for each office. “The first time was a bit challenging; the second time was slightly easier,” Snider says. “The third, fourth, fifth and sixth times, however, were a piece of cake,” he says. The solution met Heyl Royster’s need for a full-featured yet easily expandable and manageable phone system. “A nice thing about ShoreTel is that they offer you a base system that has practically everything you need,” Snider says. “You can then logically scale upward from that over time.”

Scalability proved crucial for Heyl Royster, observes Steve Katz, ShoreTel’s CDW team lead. “They can start out with 10 or 20 users, which is what we did in Chicago, and then just add on more pieces,” he says. “It’s very Lego-like in terms of the architecture.”

Simple, centralized management allows Heyl Royster to save time and utilize its IT staff more effectively. The ShoreTel system’s server resides inside the law firm’s main data center in Peoria. “If we have to add users, change users or move users, it’s all done through a single interface,” Snider says. Previously, an IT team member would have to log in to each individual office phone system to make changes related to that site. “Today, it’s a single phone system,” Snider says. “We log in at one place and save a lot of time.”

“In the past, phone systems have been unclear and required outside technicians and service agreements that basically lock the customer out from touching and keeping their system up to date,” CDW’s Hester says. “That’s no longer the case for Heyl Royster.”

A Wide Range of Features

With the ShoreTel solution operational in all six Heyl Royster offices, employees can use fast and convenient four-digit dialing when calling among offices. There’s also tight integration with Microsoft Outlook.

“When a call comes in on the ShoreTel system, it automatically looks at my contacts and instantly presents the caller’s name on my computer screen,” Snider says. “At that point, I can click on a button that says ‘Answer’ or ‘Send directly to voicemail’ because I’m busy.”

Additionally, Heyl Royster employees use ShoreTel Communicator, a software app available for Windows and Mac OS X web browsers, which provides a suite of tools for managing real-time communications on their computer or mobile phone. The apps allow users to move seamlessly between voice, video or IM as needed.

“When you open this app, you can see the telephone directory and your call history; you can also create conference calls and many other different types of services,” Snider says.

The ShoreTel system opens new communication and collaboration avenues for time-pressed attorneys. “Many law firms, for instance, will conduct depositions over video conferencing, which can be a part of a phone system,” Hester says. “They can record, share or archive the deposition, speeding up how they do their jobs.”

“I do a lot of interoffice calling, so I love that our offices are now all connected through one phone system,” she says. “Going into Communicator, I can type in anyone’s name to see if they’re available or if they’re out of the office.”

Snider enjoys the “Find Me” feature, noting that the service comes in handy whenever he travels from his Peoria base to the firm’s other offices.

“Say I’m in our Chicago office for the day,” he explains. “When I get to the Chicago office, I can sit down at any ShoreTel phone and say, ‘Make this phone my Peoria phone,’ and then whenever anyone dials my extension, or my direct dial number, it rings in Chicago — nobody notices the difference.”

Another feature Rutledge really likes is the ability to receive voicemail files via email. “It’s very important to our attorneys, especially when they are traveling,” she says.

Plus, the classroom training provided by ShoreTel was a snap, according to Snider. “We were in small-enough groups — no more than 10 or 12 — that the trainer wouldn’t lose control of the class,” he says. “It was really like getting personal training the way everything was presented.” Training the IT staff was also fast and pain-free — a four-hour web-based training got Snider’s team started.

Snider, meanwhile, has one final bit of insight for organizations planning to replace their existing phone systems. “Do your homework, look at multiple vendors and talk to references,” he suggests.

ShoreTel Onsite integrates features such as video conferencing, instant messaging, mobility and online collaboration into a single IP PBX solution, which leads to a variety of business benefits, including:

Shorter process time: Reduce the time required to identify, locate and reach out to key experts, allowing users to quickly and easily gather the insight they need to make decisions.

Seamless collaboration: Provide the appropriate communication medium for tasks such as voice calls for one-on-one issues, online collaboration to share ideas and video for presentations. 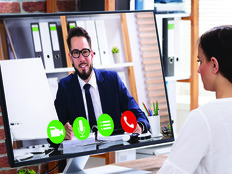