Digitization of documents and workflow processes is accelerating in North America and worldwide, according to the Photizo Group, a consulting and marketing intelligence firm in the imaging industry. Further, the trend is starting to trickle down from large enterprises to the small- and medium-sized businesses, analysts say.

The seemingly inexorable march toward document and workflow digitization got a boost earlier this month when HP Inc. updated its JetAdvantage portfolio with new offerings designed to make it easier and cheaper to scan and digitally capture information to create paperless offices.

HP Scan Configuration Service offers templates for the financial services and healthcare industries to reduce the time and money spent to digitally capture information required for common business functions. For example, the service has financial services templates for loan applications and account openings and healthcare templates for patient admissions and discharges. Templates for other industries are to come. HP says customers can get the service for a “one-time fee of $25 per device when bundled with the purchase and installation of HP Embedded Capture.”

Additionally, the HP Capture and Route service is now available on its HP Enterprise multifunction printers and digital senders. “For customers that only need to deploy a single process to digitally capture and manage paper documents,” HP said, “this option enables a simple, modular deployment, along with pricing flexibility.”

Healthcare and Finance Lead the Way in Digitization of Workflow

HP’s decision to focus on the finance and healthcare industries is not surprising, according to analysts, because those are the hottest ones in the digital scanning market. According to data provided by research firm IDC, the financial services industry leads the way, with an average of 25.4 million documents scanned per year in the United States, followed closely by the healthcare industry at 22.2 million.

IDC analyst Ron Glaz says that the healthcare industry is spending heavily to convert to electronic medical records systems. There is pressure on larger healthcare organizations to get as many offices as possible to convert so that there is not a “paperless-lite” environment, with some processes done digitally and some on paper.

Edward Crowley, president and CEO of Photizo Group, says that the legal industry is also investing in document digitization, as is real estate. More and more companies are moving activities that had been done on paper, particularly transactional activities, to digital formats.

“Historically, we have talked about how digitization of workflow has been a very expensive, intensive process with a lot of change management associated with it,” Crowley said, noting that workers need to be trained and incentivized to scan documents and work digitally. “There are a lot of barriers that have made it the domain of big enterprises.”

Smaller businesses needed a compelling business model to change how they operate. “Now we’re seeing the democratization of digitization,” he says, as the process shifts from larger organizations to mid-size ones.

According to Crowley, Photizo’s advanced document services forecast, which looks broadly at the workflow digitization opportunity (and not just document scanning), found that the North American market inched up by around 2 percent from $20.6 billion in 2013 to $21 billion in 2015. Globally, the market grew 4 percent from 2013 to 2015, increasing from $50 billion to $52 billion.

Moving From the Enterprise Down to SMBs

IDC’s Glaz says that the digital scanning market has largely focused on large enterprises. “That’s really the low-hanging fruit,” he says. “And there is a great interest in that area to become more efficient. For them, if they are saving a penny for every document they are not using, and the volume of documents is in the billions, it becomes a lot of money in the long run.”

Medium and small businesses need to move to digitization to maintain relationships with large enterprises, Glaz said. He adds that workflow digitization is starting to move into “line of business” markets and medium-sized businesses.

“Small businesses have the exact same needs that enterprise customers have,” says Jordi Padros, future product manager for Capture Solutions at HP. “It is just a matter of scale, capacity to invest and infrastructure available. A small company deals with lower volumes of paper, which for the same investment, results in longer-term payback. Besides that, capture also requires general middleware or heavy infrastructure, which for smaller companies becomes a bigger problem as they are more nimble.”

Photizo’s Crowley says that most large enterprise organizations have a fairly large and sophisticated IT organization, but medium — and especially small — companies might not have an IT department or dedicated IT staff.

“I can see implementing this in a really easy, contained way without having an IT professional do it,” Crowley says. “And that’s huge.”

According to Glaz, the average annual saving from workflow automation, which includes converting paper documents to digital for integration within a digital workflow, increases with company size. The savings are an average of $826,000 per year for enterprises with more than 1,000 employees, $260,000 per year for those with 500 to 999 employees, $167,000 for companies with 100 to 499 employees, and $84,000 for those with fewer than 100 employees.

“Every company has their workflows implemented in different ways, which results in different savings,” Padros says. “There are also a lot of indirect costs that are difficult to measure because they’re not tangible. So before providing a number, an assessment is typically recommended for companies looking to implement these solutions. With that said, savings come from things like reduced storage, reduced risk of fines and reduced user paper handling. But where it is most pronounced is in the reduction of mailing and logistics, which has a dramatic impact not only on costs but can also impact the bottom line directly.” 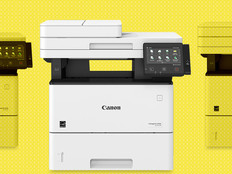