Technology vendors have been pushing the conversation around software-defined networking (SDN) in the enterprise for the past couple of years, and with good reason. The virtualization of the network — and, eventually, the whole data center — promises to revolutionize corporate IT in the same way that server virtualization has rapidly taken over in the past decade.

By essentially decoupling network control from hardware such as switches and routers and placing it with a distinct software-based component of the network — called the controller — that component becomes the hub through which all global decisions are made. This makes the network far more responsive and agile so IT workers can respond more quickly to dynamic business requirements.

While SDN holds a lot of potential, many small businesses aren’t even aware of the technology, according to IT market research and analysis firm Techaisle. And while awareness among midsize companies is higher, it isn’t as high as it should be.

Only 3 percent of small businesses worldwide know anything about SDN technology, according to the survey data. Awareness nearly quadruples (to 11 percent) for medium-sized companies globally, however, and jumps to an even more substantial 19 percent among medium-sized businesses in the U.S.

Techaisle spoke to a CIO of a medium-sized business with 950 employees and 110 servers — 50 percent of which are virtualized — about his SDN awareness.

“Yes, I have heard about SDN. It’s a service where the architecture can be dynamically reconfigured or driven by a software personality layer as opposed to being hard-wired,” the CIO said. “Yes, we are planning to invest in it.”

Although the majority of SMBs aren’t aware of SDN today, those that are expressed interest in adopting the technology over the next 12 to 18 months to lower network-related capital expenditures and manage cloud, mobility and Big Data growth.

An SDN-aware IT manager of a 70-employee small business with four servers using cloud, virtualization and managed services said, “I think it probably has an advantage of being much more flexible because of the different approaches that it has to dynamic network management. It has certain development tools that can be used to operate different network services.”

The IT manager went on to say that his company still needs to investigate SDN further before determining how well it might fit in their infrastructure. Then it can decide whether to implement the technology on its network.

Techaisle estimates SDN awareness among SMBs will grow substantially over the next couple of years, reaching $204 million in 2016. That’s a compound annual growth rate of nearly 81 percent of SDN’s current market value. Expect to hear a lot more about the technology in the near future. 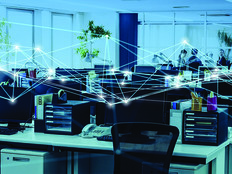