There’s no “I” in team, goes the old saying, but many seem to think there’s a “1” in innovation. Maybe it’s a side effect of the rise of savior entrepreneurs like Tesla Motors co-founder and CEO Elon Musk, but far too many seem to believe that innovation is the responsibility of one person within an organization, rather than something that’s distributed throughout the leadership within an organization.

A perfect example of this can be found in "The New CIO: Chief Innovation Officer," a recent article in the The Wall Street Journal’s CIO Journal blog. The piece highlights how CIOs can transition into a new role that puts them in the position to lead and drive change within their organizations.

The points made in the WSJ article are valuable insights for any CIO to absorb, but the idea that a CIO alone can enact sweeping, organization-wide change is a pipe dream.

Innovation Comes in Many Flavors

These changes go beyond conventional innovation tactics, such as employees having experimental free time (a la Google) for two hours on Fridays or innovation jams. True innovation is difficult to define, test, perfect and install. 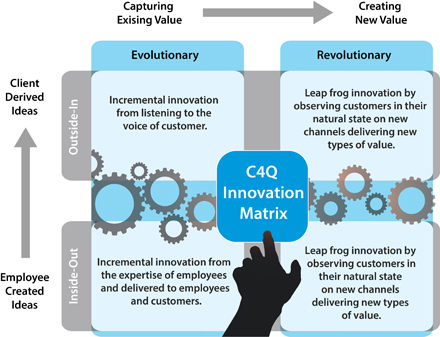 What changes may be needed? Which new partnerships may be needed to cultivate each innovation type? The C4Q Innovation Matrix helps illustrate that innovation not only is the job of the CIO or CTO but also requires the CEO, COO and CMO to make material contributions.

Innovation at the CEO Level

Inside-out innovations are stifled by traditional command-and-control organizational designs and suffocated by incentive-model designs, where the larger a leader’s proverbial ship, the larger said leader’s compensation. CEOs must commit to an organization redesign in which the structure is informed by the strategy rather than one in which the strategy is dictated by the structure.

But the dividends of such innovation can pay off. Steve Jobs axed more than 70 percent of the products at Apple when he was reinstated as CEO in 1996. Jobs’ belief that a focused product line-up was key to any business’s success was something he shared with Nike CEO Mark Parker.

Jobs told Parker, “Nike makes some of the best products in the world. Products that you lust after. But you also make a lot of crap. Just get rid of the crappy stuff and focus on the good stuff.”

Companies that succeed with organizational transformations encourage leaders to cannibalize their roles through innovation, which redirects their value to the company, away from a specific title. This shifts the conventional thinking from, “If I don’t have anything to do, what is my value?” to “I can’t wait to innovate away everything I do so I can deliver new value.”

Innovation at the COO Level

Traditionally, project demand originates from business lines, and investment governance is ROI driven. From an operating-model perspective, a portion of the project spend must be earmarked for innovation beyond the research and development stages. In order for innovation to thrive, the investment-governance process must be deliberately designed to fund innovation projects past the ideation phase into championing and the execution phases; this is specifically a COO responsibility.

One key example of COO-led operational change is to design and install an innovation chargeback model similar to the line of business chargeback model for shared services such as network, storage and human resources. This allows lines of businesses close to the voice of the customer (VOC) to take innovation seriously as a shared service and better identify, prioritize and install VOC outside-in innovations.

Facebook COO Sheryl Sandberg exemplifies innovation at the COO level, with the company’s laser-focus on building a viable mobile business.

“Mobile is the top goal right now,” Sandberg said at the All Things D Conference this year. “Every product team is focused on mobile,” indicating horizontal buy-in, from ideation to execution.

Innovation at the CMO Level

As many management-consulting companies predicted, the CMO is spending more on technology and is many times closer to the customer than other c-level officers. In many industries, listening to customers is not new. However, where we listen and the veracity of the information we obtain, the new vocabularies we listen to and the speed by which we convert data sourced from listening to value have changed.

While this is very much a Big Data and social conversation, it is hardly a CIO- or CTO-only topic. CMOs are consistently pressed to listen to new types of customers, on new types of channels, for new data, with new vocabularies, driving new insight and helping deliver outside-in innovations.

Technology enchants consumers by serving everything they want, when they want it and how they want it. In some sectors, it’s common to include these “emotional requirements” in the project lifecycle.

The practice here is to add emotional requirements as a precursor to the business requirements in an effort to satisfy the consumer’s new emotional thirst/outcome. CMOs are charged to innovate by listening more and in new ways and by catering to the consumer emotionally.

Tapping into the power of customers’ emotions to develop game-changing marketing is exactly what Chipotle CMO Mark Crumpacker did with the fast-growing, fast-casual chain. Fast Company named Chipotle one of The World’s 50 Most Innovative Companies last year, and in its profile of Crumpacker, they recounted one of his moments of epiphany:

[W]hen he hosted a series of screenings of the investigative documentary Food, Inc., Crumpacker understood that the only way to differentiate Chipotle was to replace traditional advertising with more emotionally engaging stories.

That’s when Crumpacker turned to CAA Marketing, the arm of the Hollywood talent agency plugged in to the best storytellers in the world. Crumpacker told CAA he had seen a heart-tugging two-and-a-half-minute commercial for Chevron called "Human Energy." He wanted a Chipotle version.

"If a company like that can make you cry, imagine if we had something comparable for Chipotle," Crumpacker says

Innovation Requires All Hands on Deck

The examples of innovation at various levels of the c-suite should serve as a valuable lesson to any organization. Anyone, given the right tools, resources and smarts, can be a change agent within an organization.

While it’s become a trend for companies to develop roles specifically for innovation, the real power of innovation comes through the integration of innovation throughout the entire c-suite.

Real innovation isn’t in a job description or new title, it’s a way of life.