Active Directory is the foundation on which most Windows-based networks are built. Businesses both large and small use it, with the possible exception of very small businesses, such as home-based enterprises, that may simply deploy Windows computers as a workgroup.

Even if your business has only 50 to 100 users, managing Active Directory can mean plenty of tedious, repetitive work. User accounts need to be created and configured, passwords need to be reset and group memberships need to be updated over time.

Larger businesses have to deal with even more Active Directory administration tasks, including creating and populating organizational units (OUs) with users and computer accounts, delegating control over OUs so others can manage their objects, configuring sites and site links in distributed WAN environments and so on.

The MMC snap-ins were easy to use for one-off manual tasks but cumbersome for repetitive tasks. Command-line utilities such as ldifde and dsadd could be used to automate a number of common administrative tasks, but the syntax varied greatly among different tools. Some third-party vendors had products that were great for automating Active Directory management but required administrators to shell out extra bucks to use them.

First, Microsoft introduced a new Active Directory Administrative Center (ADAC) as the go-to tool for performing the daily tasks of Active Directory administration. Second, Microsoft included an Active Directory module for Windows PowerShell that allowed administrators to perform many management tasks from the command-line or, even better, write scripts that could be used to automate repetitive tasks. However, you still had to choose between using the ADAC to manually perform tasks one at a time; using Windows PowerShell to perform tasks from the command line; or automating them with the use of scripts.

The ADAC has now been enhanced in Windows Server 2012 with the inclusion of a new feature called the Windows PowerShell History Viewer. To understand what the History Viewer does and how it can be useful, I'll create a new user account using the ADAC.

Figure 1 shows the Create User task page being used to create a new user account for Karen Berg, a user in the Seattle Users OU of the corp.contoso.com domain. By scrolling through this task page, you can manually specify the new user's account, organization, membership, password and profile attributes. 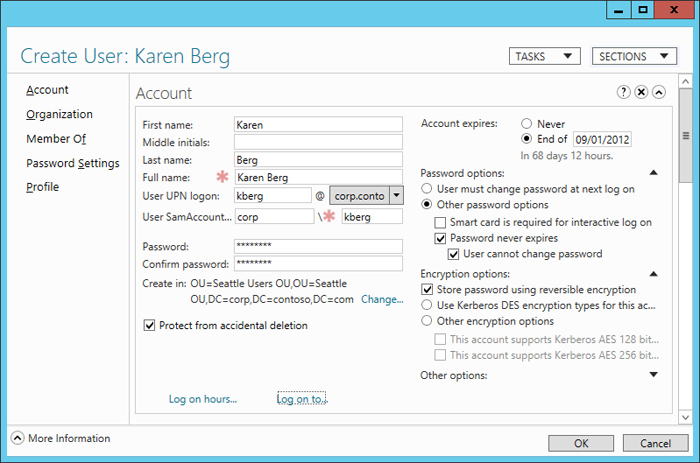 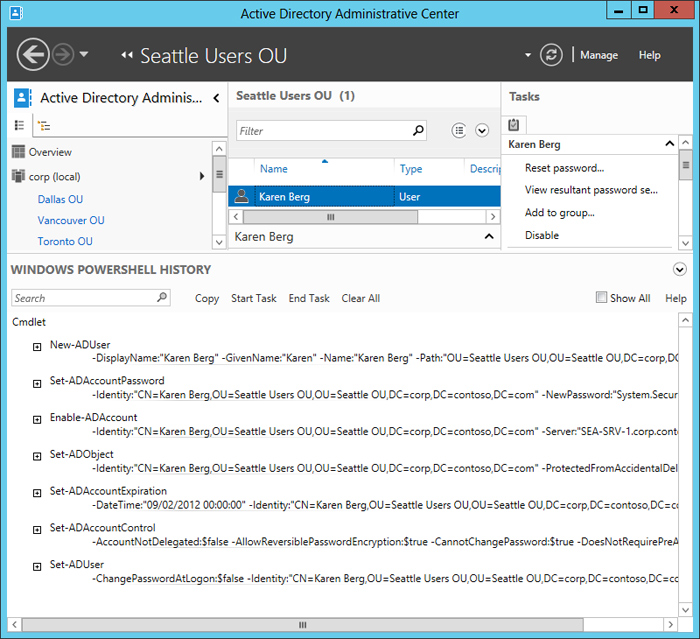 If I click Copy in the Windows PowerShell History toolbar, I can copy the contents of the history to the clipboard. I can then paste the clipboard contents into a text editor, such as Notepad.

At this point, I can do one of several things. First, I could make some changes to the above series of commands, for example, by changing the user's name and account name attributes. I could then run the commands again to create a second user with very little additional effort.

Alternatively, I could use the above series of commands as a template for generating a script that could be used to create new users in bulk, just by performing a single operation. As a simple example, the following command reads information from a comma-separated (CSV) text file, pipes the information into the New-ADUser cmdlet to bulk create new users, configures the password for each new user account as Pa$$w0rd and enables the new accounts.

Another approach you could follow for bulk user account creation would be to first create and configure a template user account that has the account expiration date, password options and other attributes common to all the new accounts you will be creating.

You could then use Windows PowerShell together with a CSV file to leverage your template account to bulk create new users from it. To learn how to do this and other Active Directory management tasks using Windows PowerShell, see my new book Installing and Configuring Windows Server 2012 Training Guide from Microsoft Press.