Microsoft recently released two new flavors of Windows with “8” in their names. One, simply called Windows 8, is a standard edition appropriate for smaller organizations and consumers. The other, Windows 8 Pro, offers a beefier design, with additional security and management capabilities.

A third new release, Windows RT, supports portable devices using processors from ARM Holdings. The British multinational semiconductor and software design company has carved out a significant niche in tablets and smartphones, thanks to its lightweight and power-conserving chip designs.

All three Windows editions share an important capability for modern mobile devices: touch-screen navigation that lets users scroll through screens and select applications with their fingertips. The Windows OSs also give the user the option of using a keyboard, a mouse or a stylus for navigation.

Touch isn’t new or unique to Windows, but according to industry analysts, Microsoft is playing catch-up in this area. Yet the latest Windows 8 OS does have one big advantage over its competitors: It’s Windows.

“Organizations can support and manage devices all within one environment, and it’s one that 99 percent of IT managers are familiar with,” says Jay Parker, vice president and general manager of the consumer/SMB business unit at Lenovo North America.

With Windows 8, IT managers can use one OS across their mobile and desktop implementations, which is a differentiator that will resonate with many organizations, says Jeff Orr, senior practice director for mobile devices, content and applications at ABI Research.

“Being able to maintain all of your Win32 apps, plus having the authentication, security and manageability that’s expected within an organizational environment will be exclusive to the Windows 8/ Windows 8 Pro environments,” Parker adds.

All of the new Windows editions also introduce an extensive makeover of the traditional Windows user interface. The Start menu is gone, replaced by a Start screen packed with touchable tiles representing available applications. Instead of merely showing the names of the underlying applications, the tiles provide at-a-glance summary information for many of the programs.

“Users will see cues when they’ve gotten new e-mail messages, or reminders can pop up within the context of the application,” says Jeffery Hoag, lead of the mobile R&D team in the Microsoft Program Office at HP. “This gives users the ability to incorporate modern, user-friendly mobile applications within a full Windows operating system. That is huge because they get both feature-rich desktop applications that are critical to operations and the ability to do mobile applications.”

The new touch interface supports pen input with associated handwriting recognition, and a virtual keyboard with either a traditional QWERTY design or one that splits the keys into left and right halves, so users can tap keys with both thumbs, a la a smartphone’s interface. The touch capabilities also let users pull menus from the sides and bottom of the main screen so they don’t clutter the main work area when the menus aren’t needed.

Additional capabilities in the revamped Windows environment include a new app store, where organizations can download mobile apps or create secure areas to store custom apps.

“IT can design their own line-of-operations apps and use a private store interface to make them available only to select individuals or workgroups,” Hoag says.

“The big changes will come with Windows 8 devices that are touch enabled, have a keyboard for input and run the thousands of apps that people need to have available,” says Anil Desai, an independent analyst. “That’s a major shift that may encourage some people to look at a Windows 8 device as a notebook replacement.”

Finally, Windows 8 can protect mobile devices from rootkit attacks, which happen when malware strikes a computer as it is first booting up and before the OS and antivirus software take over. Safeguards include support for the Trusted Platform Module (TPM) specification.

“If anybody is attempting to attack the system before it is handed off to the operating system, that’s immediately detected and the system can’t be accessed,” Hoag explains.

A Tablet–Notebook Hybrid Approach to Mobility

Back in the day, distinctions existed among mobile devices to clearly separate designs for information consumption versus information creation. Even operating systems knew their place: Some supported mobile applications; others were strictly for the desktop, and crossing these boundaries was unthinkable.

Today, new generations of split-personality devices and OSs have arrived that cross traditional boundaries to serve the whims and needs of organizations and individual users. Case in point: Lenovo’s new ThinkPad Twist operates as a traditional ultrabook one minute, then folds into a high-power tablet the next. 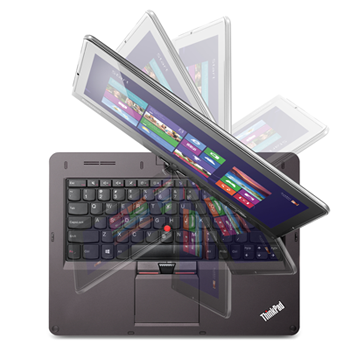 Analysts say these shape-shifters represent more than a showy attempt to grab attention in a crowded mobile market. They address the growing realization among organizations that mobile applications can boost productivity when users find the right pairings between core organizational applications and mobile technologies.

“We are going to see many experiments and new ideas coming out that break the rules as we know them,” predicts Orr. “Instead of one-size-fits-all solutions, we’re seeing many different permutations. Ultimately, that means different choices, whether you run a large IT-centric enterprise or a small organization.”

How to Choose the Right Mobile Platform

Choice is good when it comes to technology for professional users, and with a handful of OS options and a wide variety of mobile hardware, IT managers have plenty of choices. The trick is to sort through all the options to match the right configuration with the users’ needs.

To address this challenge, experts advise IT managers to start by analyzing those requirements and then considering the latest and greatest technologies. For example, an average office employee who spends most of his or her time at a single work area may still be best served with a standard notebook or perhaps a touch-enabled all-in-one desktop PC.

For workers who travel frequently, the IT team should explore new mobile options. If information consumption is key, a tablet may be the best choice. If data consumption and creation are critical, an ultrabook or hybrid design may work best.

Other factors include the applications that the users will run. Tablets running highly efficient Atom and ARM processors can serve lightweight apps. Alternatively, complex applications and proprietary software may need the power of standard processors, starting with Atom and high-performance x86 designs.

Another key consideration is whether workers are able to use the device productively in their main offices, on the road and at field locations. “How a mobile device integrates into different usage scenarios is the critical question,” Orr says. “The lines between these distinct computing experiences are blurring.”