If Microsoft were looking for a sign that its Windows XP Countdown campaign is working, it needs to look no further than ILTA’s 2012 Technology Survey.

According to the survey, Windows 7 is now the most popular primary desktop operating system among the 487 law firms surveyed, with 60 percent of firms reporting they’re using either the 32-bit version (32 percent) or the 64-bit version (28 percent).

Meanwhile, use of Windows XP has dropped 28 percentage points from 2011 to 2012. Two years ago, 65 percent of the firms surveyed said Windows XP was their primary desktop OS, but last year, only 37 percent of firms stuck with Windows XP. It’s a trend that’s likely to continue, since Windows XP is now 11 years old. 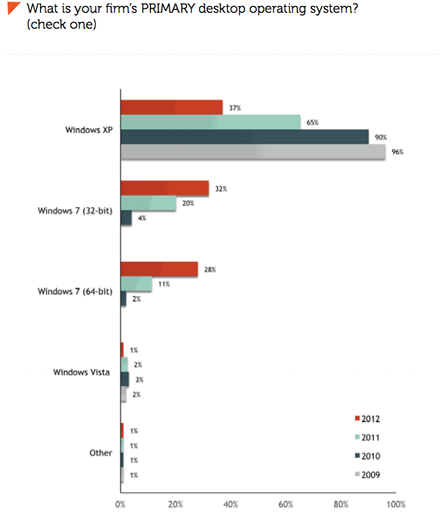 Last year, Microsoft announced it would end official support (which includes security patches) for Windows XP and Vista. The company has since urged organizations to upgrade to either Windows 7 or Windows 8.

The question most firms must wrestle with now is whether to upgrade to Windows 7 or Windows 8. Windows 8 has a dual desktop-mobile user interface, which would let attorneys and other staffers use the desktop or mobile-optimized interface, depending on their device.

Given the trend toward mobility, it could make more sense to skip the Windows 7 upgrade and go right to Windows 8.

Is your firm planning to make the switch from XP to Windows 7 or 8? If so, are you skipping straight to Windows 8? Let us know in the Comments.