Change is afoot in many IT departments in law firms across the country thanks to the consumerization of IT.

The first day of sessions at ILTA 2012 tackled many of the coming changes that are set to impact the legal services industry, but two of the most important shifts are Microsoft's Windows 8 and Apple's iPad. Microsoft's OS is a staple in law firms across the nation, but Windows 8 is a complete reimagination of the familiar OS. Apple's iPad is in its third iteration, but many firms are still in the experimental phase when it comes to using them for work.

Here's a look at two sessions that touched on Windows 8 and iPads at ILTA 2012.

Jarrod Roark of Bennett Adelson led a session on "A Winning Future with Windows 8." During his presentation, he went over the improvements that Microsoft had baked into the latest version of its new operating system, such as improved integration with Direct Access, Windows to Go and BrancheCache, but he warned that the biggest hurdle to deploying Windows 8 would be in orienting new users to what Microsoft used to refer to as the "Metro" style user interface.

"The Metro interface part of Windows 8, is not superhard to figure out," Roark said. "But it is a change, and it is different from what people are used to. And it will cause an impact."

One main feature that users will notice right away is that the start button is no longer with us. Since Windows 95, Microsoft has relied on its start button to serve as a centralized launch pad for all of the layers of menus in the OS.

So instead, users will have to navigate using the live tiles, the colored squares that represent the different applications in the OS.

The key, Roark says, is to roll out the new OS to a group of early adopters. These early adopters should be technology enthusiasts, or people who aren't afraid of trying new things. This beta group, if you will, will allow IT workers to work out the kinks in the new OS before deploying it across the firm. But when IT departments do decide to roll out Windows 8 across the company, IT staff should be prepared to do training.

"There's going to have to be concerted effort to train your organization on how to operate in this world," Roark said.

Making the Case for iPads in the Firm

There's no doubt that the iPad has won a prominent place in the hearts and minds of both the consumer and the enterprise. As the leading tablet product, many businesses are still figuring out how the iPad can best fit into their everyday workflow.

During the presentation, the two IT leaders went through an assortment of useful iPad apps, which they categorized into different buckets like communications apps, note-taking apps, trial apps and more.

For lawyers who travel often, McGuire recommended Seat Guru, an app that lets the user know everything they need to know about their seat on their upcoming flight.

"For those of you who want to know exactly what your seat will be like, like leg room, etc. If you plug in your flight and airline, it'll tell you nice little details about your seat," McGuire said.

Security was a major caveat to many of the apps that the duo presented and they cautioned that each firm would have to do its own due diligence to make sure the apps meet their compliance requirements. 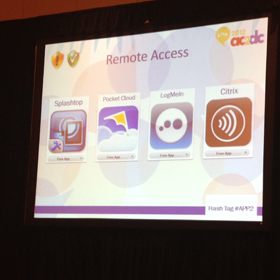 Speaking of cloud-based storage apps like Google Drive, Dropbox and SkyDrive, McGuire said, "These are retail products. You won't find the level of assurances that law firms will need. But personal stuff? Love it."

There were also a host of entertainment apps that the two went over, including Netflix, HBO Go and Amazon Video. Neesen pointed out that while these apps weren't productivity tools, they were inevitable because users are using their iPads as both personal and professional devices.

"Personal apps became important because lawyers want to use one device," he said.

For users who want to access their desktop from the iPad, remote access apps like Splashtop, LogMeIn and Citrix make it a snap. Using the iPads for remote access is also a popular trend for many lawyers, but it's one that CIOs should keep a close eye on, Neesen warned.

"One of the things [to be careful of] is when an employee is terminated, depending on how fast we cut that connection matters. They can walk over to Starbucks and have access to everything," he said.

For more news on ILTA 2012, check out our hub of articles, videos and more from ILTA. 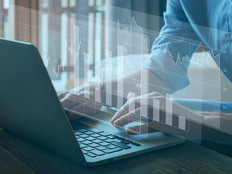