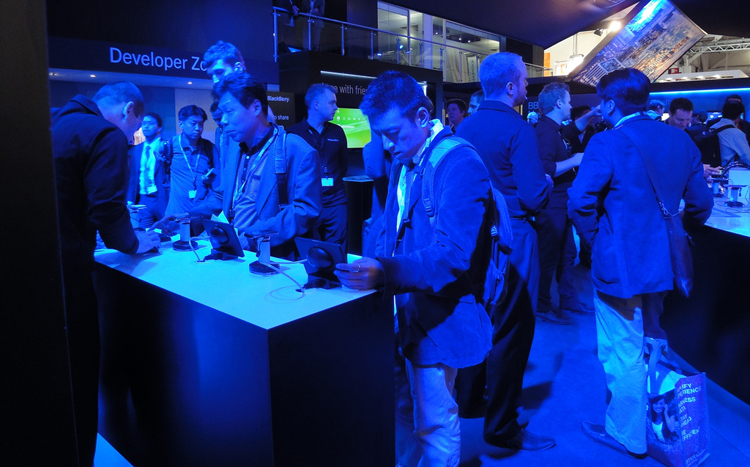 Conference attendees get a look at BlackBerry smartphones and tablets at the 2012 Mobile World Congress.
Photo: Official BlackBerry/Flickr

The Mobile World Congress, put on annually by the GSM Association, is mobile computing’s big night out. Mobile device hardware and software makers, no doubt fresh from the 2012 CES, met in Barcelona, Spain, as they do every year in February, to discuss and debate the latest and greatest in mobile technology.

On the software side of mobility, with Apple absent from the show in any official capacity, Google (with its Android mobile operating system) and Microsoft (with its Windows Phone platform) both shined brightly. Google’s executive chairman, Eric Schmidt, gave a rousing speech about the power that mobile computing will unleash upon the world in the future, and the responsibility that that will entail.

“The smartphone revolution will be universal,” Schmidt says. “The web is more than a network of machines. It's a network of minds that are evolving into a global consciousness.”

Among mobile-hardware makers, Samsung had a lot to show off, including its new stylus-wielding “phablet,” the Samsung Galaxy Note; as well as an intriguing new twist on the smartphone, the Samsung Galaxy Beam, which includes an integrated pico projector.

Here are a few highlights we snagged from the Twitterverse from people attending the 2012 Mobile World Congress.

AT&T announces global coverage via a single SIM at MWC, makes dual-wielding a thing of the past engt.co/yr7l3l via @engadget

been banging on about it for ages and finally one's here, mobiles with built in projectors, the Samsung Galaxy Beam #MWC #headupnotheaddown

Can a phone survive the next 12 months without NFC? #MWC

So every Android 4.0 smartphone at MWC that I have seen has capacitive buttons instead of on-screen virtual ones.

Is anyone else excited about all the quad-core phones coming out this year?I know I am!#mwc

73% consumers use their smartphone when shopping; 2% claimed use of mobile wallet/NFC. Shopping apps as fastest growing apps category #MWC12

Retail outlets upgrading their pay points to accommodate payment by tapping your phone on a hotspot. bit.ly/x6TiXY #MWC #innovation

Fun. Just as Eric Schmidt is taking the stage at MWC word leaks that Apple's iPad 3 will be announced next week.

The queue for the Eric Schmidt keynote at the #MWC12 is enormous. The guy sure seems to be popular. :P

The future, most easily, belongs to “ultra connected people” who can embrace the future of technology...Eric Schmidt, Google

Barcelona, Then and Now: A visual history guide to the home of Mobile World Congress: If you are attending Mobil... tnw.co/xrWLiu

Geeking out over all the new gear coming out of #MWC in Barcelona. Good to see all the manufacturers finally addressing battery life.

Mobile transforming into a powerful commercial tool:In the US, more than half of mobile users are repeat visitors to daily deal sites #mwc12

Visiting the #MWC Barcelona, too many things to see :-) twitter.com/AntonRoman/sta…

In Barcelona #mwc at #ibmmwc. Wow, so many smartphones/tablets in one place!!! Interesting network challenges for local opcos, they need NAA

Not too shabby: 144 mobile global operators committed to phones in the HTC One brand starting in April. #MWC #MWC12

The amount of tweets about how awesome it is to have ethernet at Mobile World Congress shows me how far wireless technology needs to go.