Microsoft Small Business Server 2011 is available in two editions: Standard and Essentials. The Essentials edition is scaled down for small and medium-size businesses that require integration with cloud services, while SBS Standard provides full onsite server computing for companies that are not ready or able to move critical operations to the cloud.

The new Essentials edition of SBS, which has much in common with Windows Home Server (see Utilizing Windows Home Server for Small Business), borrows technology on the client side to add support for notebook/PC backup. This is new for SBS. It also shares the same infrastructure for add-on components.

Essentials is intended for small businesses (with no more than 25 users) that don’t want onsite application servers, such as Exchange and SharePoint, but still need some basic functionality like local backup, file server and Active Directory for centralized user management. In short, Essentials is ideal for mixing simple onsite server functionality with cloud services, primarily Microsoft Office 365. SBS 2011 is based on Windows Server 2008 R2 and therefore must be installed on 64-bit compatible hardware. It requires a minimum 2 gigabytes of RAM (8GB for Standard edition).

It’s worth noting that the 25-user limit is a major shortcoming of the Essentials product. While it’s possible to purchase SBS Standard for a server solution that supports a maximum of 75 users, this adds the baggage of onsite Exchange and SharePoint, which many smaller companies try to avoid. Given that Office 365 is intended to scale for large organizations, limiting Essentials to 25 users seems a bewildering choice.

Microsoft’s official reasoning for this decision is that the client backup utility in Essentials doesn’t scale well beyond 25 users because of the limitations of the backup deduplication technology. And it’s correct to assume that SBS 2011 Standard doesn’t include client PC backup.

Currently, Active Directory (AD) single sign-on — where users can enter one set of credentials to access both the local AD and Office 365 — using Active Directory Federation Services (ADFS) is not officially supported. Microsoft plans to release an add-on for SBS Essentials in the second half of 2011 to facilitate simple integration with Office 365 cloud services, but whether that includes full single sign-on capability remains to be seen.

The Essentials management dashboard is a simple affair and almost identical to that found in Windows Home Server 2011. SBS 2011 Standard sports the same dashboard with some extra management features. 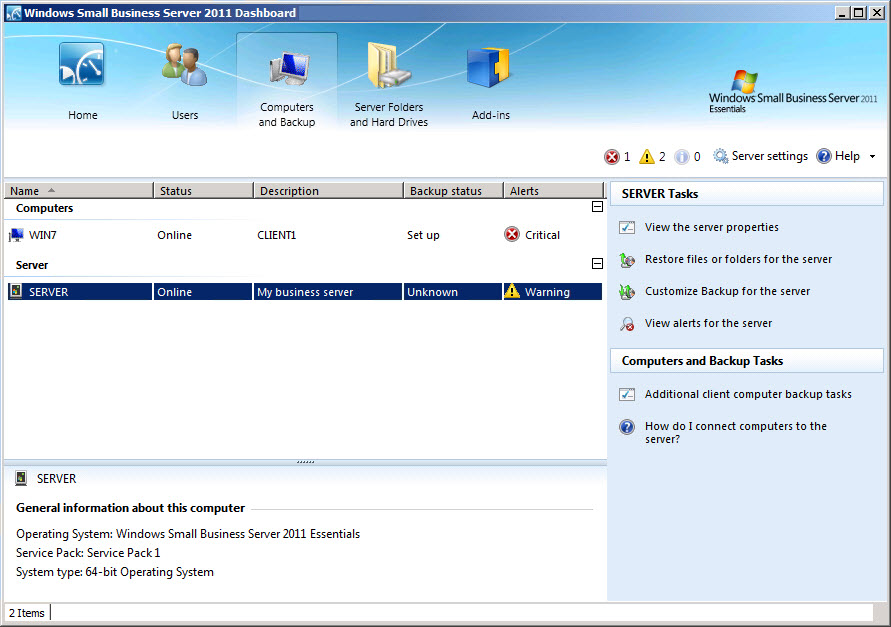 Adding a PC to the SBS domain is as simple as downloading the software from the server’s internal website. The program configures the client and — new in SBS 2011 — gives the option to migrate existing local user data and settings to the new domain user profile. During setup, the client can also be configured to wake the computer from sleep or hibernation to perform a backup.

Essentials also includes an updated Remote Web Workplace (now Remote Web Access) and is based on a SharePoint site, allowing users to get access to information stored on SBS or client devices remotely.

Licensing is now simpler in SBS 2011 Essentials, where only a server license is required. The Standard edition is similar to previous versions of SBS, where in addition to a server license, which includes five Client Access Licenses (CALs), additional CALs are required for each user (or device) that connects to the server.

As previously mentioned, one of the major differences between the two editions of SBS 2011 is that Standard doesn’t support client backup. It’s not all bad news, however, as some improvements have been made since SBS 2008. These include the ability to back up and restore individual files, and use network shares to store backups (albeit with the limitation that only one copy of a backup can be stored).

As with SBS 2008, Microsoft puts businesses that license SBS 2011 Standard edition at a disadvantage compared with SBS 2003 by not including the right to use Outlook 2010 in the SBS 2011 CAL. To make matters worse, those who ran SBS 2003 or earlier will find that 2003 CALs that included Outlook are not valid with SBS 2011, meaning Outlook must be licensed separately.

Microsoft plans to release a Windows 7 Pro Pack for SBS 2011 Essentials that automatically deploys preconfigured Group Policy settings to configure folder redirection, offline files and some security settings, giving small enterprises the opportunity to take advantage of Windows client features that are not normally deployed outside of large organizations because of a lack of technical expertise.

Microsoft is aiming SBS 2011 Standard at businesses still running SBS 2003 or earlier because it’s hard to justify an upgrade from SBS 2008 based on new features alone (unless it’s time for a server hardware refresh). Microsoft has made some strange choices regarding Essentials, especially the upper limit of 25 users and the decision not to officially support Windows Server Update Services (WSUS).

I suspect that the lack of flexibility and ability to patch clients is likely to turn off all but the smallest of organizations. One solution is to install WSUS on a separate Windows Server box, but that immediately increases costs and complexity, which is exactly what Essentials was made to avoid.