If there’s one thing the business and consumer electronics worlds can count on at CES, it’s new TVs and displays, and CES 2018 has not disappointed.

There has been a plethora of announcements around new 4K Ultra-High Definition TVs, 8K displays, foldable displays and massive, modular displays. And while businesses in some vertical markets may invest in these new displays for monitors for their employees or for digital signage in their offices or places of business, a more promising development for businesses may be digital whiteboards and screens used for collaboration.

“I think there is a tremendous value in having businesses reassess exactly the role displays are playing in their organizations and what sort of strategies they want to carry forward,” says Linn Huang, a research director at IDC who covers PCs, thin clients and monitors.

As Wired notes, despite the focus on augmented reality and self-driving cars, “CES is still a TV conference,” and a way to understand what is happening in tech more broadly, “because TVs aren’t TVs anymore: they’re smart-home hubs, virtual-assistant access points, gaming consoles and powerful computers.”

There are plenty of new displays for CES attendees to gawk at this year. Panasonic unveiled two new 4K, Organic Light Emitting Diode (OLED) and High-Dynamic Range (HDR)-compatible TVs: the FZ800 and FZ950, which will ship in 55-inch and 65-inch sizes, Engadget reports.

Sony also unveiled a new OLED TV and LG announced an 88-inch 8K OLED TV, delivering four times the resolution of 4K. LG also showed off a prototype 65-inch OLED screen that can be rolled up like a wrapping paper roll.

Meanwhile, Samsung announced a 146-inch “modular” TV called “The Wall” that uses self-emitting MicroLED technology. As CNET notes, Samsung says users can create larger or smaller screens as they see fit: “Users can add or remove modules to make their TV bigger or smaller, in any configuration, removing previous limitations on screen size, with zero impact on performance of the display.”

For more on the displays announced this week, What Hi-Fi? has a roundup of the best TVs unveiled at CES.

The Business Case for New Displays

Huang says foldable and rollable displays likely won’t be used for large TVs for the mass market, but the technology could eventually migrate its way down to smartphone screens.

New 4K and 8K TVs, especially ones that use HDR, could make sense in some businesses, Huang notes. For example, any business that deals heavily in media, engineering or graphic design will want to give its users top-of-the-line monitors to work with.

Similarly, Huang says, in many financial services businesses, especially those in the trading or capital market sectors, high-definition monitors are an integral part of workers’ tech tools. “A lot of their job is predicated on being able to process data efficiently and comfortably,” he says. These are niche markets, Huang says, but they are also not small ones.

These new displays could also be used by businesses for pure digital signage, Huang says, especially for video walls. Samsung’s modular wall “is very interesting and makes a good amount of sense” to businesses that want flexible displays for marketing or messaging.

In the future, Huang says, digital signage will be as much about the services and management of the experience as the hardware, and hardware costs will be baked into the fee businesses pay.

The Promise of Digital Whiteboards

Perhaps more interesting for businesses than the new TVs, Huang says, was Samsung’s announcement of its 55-inch digital whiteboard called Flip. The device will compete with the likes of Cisco Systems’ Spark Board, Google’s Jamboard, and Microsoft’s Surface Hub.

Huang says digital whiteboards can be key tools to enable digital transformation inside organizations, because a key element of that strategy is enhanced internal collaboration.

“If you’re going to rethink your display portfolio, there are a lot of display solutions, including digital whiteboards, which create this new world of collaboration possibilities for your users,” Huang says. “That, to me, is very promising.”

For the average business, there is probably a stronger return on investment case to be made for a digital whiteboard than a new TV display, Huang adds.

Be sure to visit BizTech throughout the week for more coverage of CES 2018. 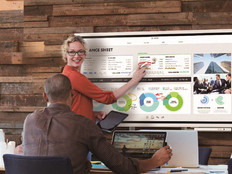 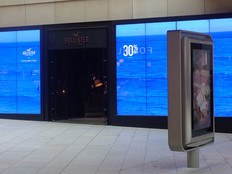 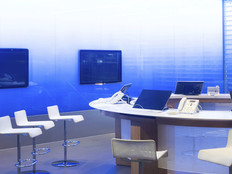