From network security and server provisioning to maintaining and troubleshooting hardware, apps, operating systems, infrastructure and sometimes even frustratingly stupid confused coworkers, they adeptly handle it all and have been doing so since the UNIX-enabled proliferation of microcomputers in the late 1970s.

In celebration of SysAdmin Day on July 28, CDW tapped into the collective wisdom of the Spiceworks IT community to answer the phrase “When I started in IT, _______.” Hundreds of responses and more than 18,000 votes from 1,400 community members paint a colorful history of the SysAdmin.

We’ve selected some of the top responses to explore the evolution of the SysAdmin from the days of minis, micros and star networks to LANs, WANs and VPNs; from terminals to workstations to PCs to mobile, virtual and beyond.

Buckle up, because we’re in for a ride. Let’s go!

“When I started in IT, thick coax was cutting-edge.”

Commonly used in connecting home video equipment, coaxial cable was for a time a staple in networking. We’ve all heard of Ethernet, and by the early 1980s it was the dominant network technology. However, early versions of the tech relied on coaxial cabling to connect devices — known as “thicknet” — called 10BASE5.

“… our networking was by serial cable or token ring with BNC connectors.”

With a maximum length of 185 meters and a node limit of 30 (often connected with BNC connectors), this 10 megabits per second technology was quickly replaced by twisted-pair cable technology, which we commonly see in networking applications today. Now, there’s no more fussing with fragile BNC connections and appallingly slow speeds. With technology like NBASE-T boasting speeds of up to 5 gigabits per second over 100 meters, coupled with solutions like hyperconvergence and virtualization, the foundations of data center and networking tech have evolved dramatically.

“… ‘Mac’ was something you called a guy you didn’t know.”

Now here’s an old-school SysAdmin response. Media access control (MAC) addresses have an interesting history: The granddaddy of this tech was known as the PuP, PARC Universal Packet, and was one of the earliest internetwork protocol suites. It was created by researchers at Xerox PARC in the mid-1970s. The problem with this tech, however, was that it did not separate the layers that identify a computer both inside and outside the network (in modern terms, MAC and IP addresses, respectively) and was thus difficult to implement. By separating these layers, the MAC address was born and could now be used for far more than colloquially addressing strangers in public.

Nope, wrong Mac. This game has way better graphics than I remembered. via GIPHY

SysAdmins still use MAC addresses, but networking technology has greatly evolved into things such as SD-WAN. The future of networking points toward systems that will allow SysAdmins to implement an intent-based model for more flexible resource allocation.

“When I started in IT, 330MB was more than enough for a hard drive.”

These days, 330MB is barely enough to cover a solid range of reaction GIFs, but having hundreds of megabytes at your command in the early days of PC computing meant (you thought) you could store a nearly infinite supply of (text-based) data … the future is now!

“… I had to punch holes on my floppy disk to double its memory.”

“… there were no hard drives, OS had to be loaded on floppy disks before you could do anything!”

For almost 40 years, the floppy disk remained a popular data format, initially used as a primary data storage mechanism (think a pre-HDD) and later mostly as a file transfer system. Who remembers backing up your OS and files with 100-plus floppies? Good times. 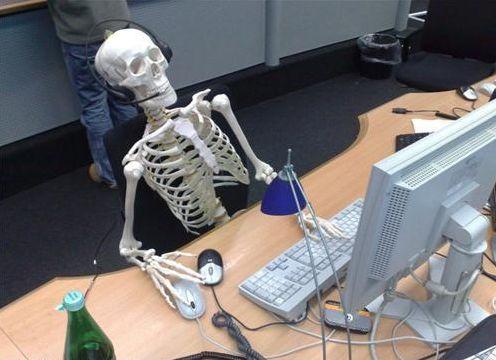 You all go ahead, this backup is almost done. via FailBlog

Not that anyone younger than 20 will remember, but before Zip disks and the 1.44MB floppy-but-not-really varietals, there were these bad boys:

You can see some hard sectoring of the floppy disks in the photo above. Let's be glad these aren't enjoying a hipster renaissance like vinyl. via Wikimedia Commons

The 8-inch floppy was pioneered in the early 1970s and featured a whopping 80 kilobytes of data storage. And, much like our astute Spiceworks contributor noted, in the early days you would physically punch a hole in the disk, a concept known as “hard sectoring,” so the computer could reference sector locations, a practice that allowed faster read and write times in many cases. They even sold peripherals to assist with hard-sectoring! Missed opportunity for the classic hole punch lobby.

Toward the end of their popularity, thanks to devices like flash drives and optical storage, floppy disks were created in several variants that enabled upward of 750MB of storage.

For today’s SysAdmin, some storage solutions now are cloud-based, scalable, and far more flexible, forgiving and spacious than a 3.5-, 5.25- or 8-inch circle of fussy, hole-punched plastic.

“When I started in IT, RAM was measured in kilobytes, not mega or giga.”

Random access memory (not to be confused with that Daft Punk album) was developed back in 1947, when data was stored within electrically charged spots on the surface of a cathode-ray tube. The idea behind it was to store frequently used instructions for programs to increase the overall speed of a system. Before that, computers used mechanical counters to store information. Before that, the Earth was still cooling and George Washington was riding dinosaurs.

Sidebar challenge: Part of that last sentence was false. Screen cap this article and circle which part, then take a photo and share it with @BizTechMagazine using the hashtag #ICantBelieveIJustDidThat.

The first commercially available DRAM (dynamic random-access memory) chip debuted in 1970 and stored exactly 1 kilobyte of data. … But can it run Crysis? No. No, it cannot.

The modern SysAdmin still takes full advantage of RAM’s evolution (some machines now boast upward of 32 gigabytes of RAM), but there are far more options than before: Some technologies are even blurring the lines between system memory and storage.

What a solid bit of trickery this was (thanks, gaming industry) and a great indicator that the Spiceworks submitter got into the SysAdmin game in the early days!

This “futuristic” feature from the 1980s was essentially an over-marketed way of selling a “compatibility mode.” A long time ago, you had what amounted to one choice for a computer: the IBM personal computer. Often (especially in gaming), programmers would use the CPU’s frequency for in-game timing. As chips became faster and more varied, many of these games became unplayable. Enter the turbo button. This created two operating states for the CPU — normal and reduced speed (“turbo”). Yes, you read that right: Perhaps counterintuitively, the turbo button was used to slow down the computer, not speed it up. Sad trombone. While I certainly felt like a bona fide NeoTokyo cyberpunk when I pressed the family PC’s turbo button, to be honest it felt silly then too.

When does this happen in the article? Now. Whatever you're reading now, is happening now. via GIPHY

The turbo button has long since disappeared from modern computers and is largely a sentimental piece of nostalgia for most SysAdmins, but it looks like someone (or something) has figured out the modern-day turbo button: Just kill all Java processes.

“… BASIC was a bleeding-edge programming language.”

Oh, you need a graphical user interface? Don’t be a WIMP. OG SysAdmins cut their teeth on systems that didn’t offer such a visual, broad level of n00b-friendliness. Long before they were oohing and ahhing over Bliss, SysAdmins were furrowing their brows in front of screens that displayed only text information — this, an evolution from human dialogue over teleprinter (TTY) machines, became known as the command-line interface.

So...where do I put the emojis? via GIPHY

However, before there was a Beginner’s All-purpose Symbolic Instruction Code (BASIC), nearly every computer relied on custom-built software — not a very scalable system. Enter BASIC, invented at Dartmouth College in 1964. This evolved CLI language unified machines and formed the functional, philosophical basis of most of today’s software.

Even though the video display terminal was introduced in the 1960s, the CLI (think MS-DOS, for example) was the dominant method of interacting with most computer systems until the 1980s, when, coupled with the explosion of personal computers, the GUI took off and began to forever stamp the phrase “Have you tried turning it off and on again?” into the troubleshooting center of every SysAdmin’s frontal lobe.

Many SysAdmins still prefer the expert-friendly (versus beginner-friendly) command-line systems for quick access and manipulating key parts of a network. Additionally, the 53-year-old BASIC remains popular today. There’s even a Nintendo 3DS game based on the BASIC engine that allows you to program your own games.

“When I started in IT, phones couldn’t connect to the internet.”

“… dial-up was my only internet option.”

Three responses, three generations of SysAdmin. At the dawn of the internet, when it wasn’t yet called “the internet,” it was known as ARPANET. Its creation involved the use of what were known as leased lines, which were private communications channels that did not have a telephone number and whose lines were permanently connected to each other (“dedicated”).

Initially these were local area networks (LANs). As infrastructure developed, networks grew and became connected over large distances (wide area networks, WANs). Leased-line technology was replaced by networks that existed on the public switched telephone network (PSTN). Thus dial-up internet was born, prompting a generation’s worth of “get off the phone, I’m online!” and fond memories of that special connection tone.

Side by side with leaps in hardware processing power and the explosion of the personal computer, the internet developed faster connections, better programming languages and interfaces, and a TON of cute pictures of cats and babies, which — along with Facebook, blossoming across the internet since 2004 — is the primary use of the internet today, probably.

Literally the end-game vision of Tim Berners Lee. via GIPHY

SysAdmins have come a long way from 1-kilobyte RAM chips and floppy disk-based operating systems, but one thing has never changed: They’ve always been IT legends.