For several years now, it’s seemed that augmented reality was just around the corner, headed for mass adoption. That time could soon be at hand, at least in the business market.

AR is often lumped in with its cousin, virtual reality. While VR produces a computer-generated reality that users can interact with (usually through a headset), AR involves digital information brought into a user’s field of view and overlaid onto the real world, which they observe through a headset or a mobile device.

And, if a recent report is to be believed, AR is about to get a major tech backer in the form of Apple, whose CEO, Tim Cook, sees it is a breakthrough technology.

Augmented Reality Is Set for Prime Time in Business

Where does AR stand in the business market? According to a report from Deloitte, “Technology in the Mid-Market — Taking Ownership 2016,” AR and VR are both popular among the middle market companies it surveyed.

Since Deloitte combined AR and VR, it’s difficult to tease out how much interest there is exclusively in AR, but the survey of 500 midmarket executives found that 88 percent of respondents “indicated that their companies are using some form of virtual technology or augmented reality in their business operations.”

According to the survey, 42 percent of companies “are using virtual demos or interactive tools to help improve employee and customer interactions with their products and services,” while 40 percent “use the technologies to train their customers in the use of products such as medical devices, or in scenarios such as hazardous materials.”

Among the sectors represented, tech companies were the most likely to use AR or VR to enhance the customer experience. Energy companies, and to some extent health and life sciences firms, were more likely to use AR/VR for employees, the survey found.

How could AR be used in business? “Imagine giving clients the ability to tour a manufacturing site with a smart phone,” the report notes. “Or giving customers the opportunity to see how a new cabinets will look in their own kitchen. Or for medical patients, giving them a chance to explore what procedures might look like through the convenience of their smart phone.” The report notes that AR “adds visuals and sounds to the current environment to create illusions that heighten the user experience.”

According to IDC, worldwide revenues for the AR/VR market will grow from $5.2 billion in 2016 to more than $162 billion in 2020. “Revenues for VR systems, including viewers, software, consulting services and systems integration services, are forecast to be greater than AR-related revenues in 2016 and 2017, largely due to consumer uptake of games and paid content,” IDC predicted in August 2016. “After 2017, AR revenues will surge ahead, hitting critical mass in healthcare delivery and product design and management-related use cases.”

“The retail space has dipped their toe in AR briefly. For instance, Ikea used AR so customers could see how a couch would look in their living room, or if that color rug would work with their room design,” Joe Arcuri, director of product and user experience at creative agency Overit told Business News Daily. “[The technology] could also be applied to the construction industry. How cool would it be to see what a future house will look like on a plot of land, or how a deck or addition could look within the current environment?”

Meanwhile, The Economist notes two big hurdles facing AR: The hardware can be a bit clunky, and users of the technology worry that those around them think they are being viewed without their consent. “Both of these problems are solvable. Computers only ever get smaller. Costs shrink relentlessly, too,” the report notes. “It may well be possible one day to build a capable and affordable AR computer that looks like a pair of fashionable glasses. Social etiquette also evolves. The Snapchat generation may not be troubled by the idea of being perpetually on camera.”

Apple Could Become an AR Champion

Just like smartphones, the AR market could get a jolt from Apple. Cook told the British newspaper The Independent in February that he regard AR “as a big idea like the smartphone,” and as “not a product per se, it’s a core technology,” akin to the silicon chipsets in iPhones.

“I’m excited about augmented reality because unlike virtual reality which closes the world out, AR allows individuals to be present in the world but hopefully allows an improvement on what’s happening presently,” Cook says. “Most people don’t want to lock themselves out from the world for a long period of time and today you can’t do that because you get sick from it. With AR you can, not be engrossed in something, but have it be a part of your world, of your conversation. That has resonance.”

According to a report this week from Bloomberg News, Apple is working to turn those sentiments into reality. The report, citing unnamed sources familiar with the matter, says that “Apple has embarked on an ambitious bid to bring the technology to the masses — an effort Cook and his team see as the best way for the company to dominate the next generation of gadgetry and keep people wedded to its ecosystem.”

The report adds that “Apple is working on several AR products, including digital spectacles that could connect wirelessly to an iPhone and beam content — movies, maps and more — to the wearer. While the glasses are a ways off, AR features could show up in the iPhone sooner.” Apple declined to comment, according to Bloomberg.

One feature Apple is reportedly developing would use AR “to place virtual effects and objects on a person, much the way Snapchat works. The iPhone camera features would probably rely on a technology known as depth sensing and use algorithms created by PrimeSense, an Israeli company acquired in 2013. Apple may choose to not roll out these features, but such additions are an up-and-coming trend in the phone business.” 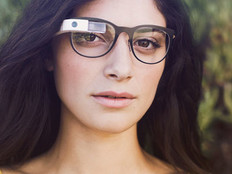