Every business is a technology business, and that truism holds for professional sports too. Because whether they like it or not, every sports team is playing the game of IT. Those teams that opt to sit on the bench rather than engage with technology may soon find themselves off the roster altogether.

When Wes Edens purchased the NBA’s Milwaukee Bucks in 2014, he found a team that was anti-tech and out of step with the times.

“We bought businesses for a living, and this might be one of the worst businesses we ever bought,” Edens said, while being interviewed at the 2015 On Deck Sports and Technology Conference in New York City. “The Bucks have a great franchise history, but they were Luddites. They were not big adapters.”

To bring the Bucks into the 21st-century sports experience, Edens plans on including connectivity as an essential element of the new arena he hopes to build. In the meantime, on a team level, the Bucks are taking advantage of player tracking technology and data analytics to improve their game, he said.

The NBA has a leg up on data analytics thanks to its deployment of SportVU tracking in all games, but the Bucks are doing some interesting things with data and technology beyond SportVU. The team is using a 3D monitoring tool to track player intensity during games, Edens said. It’s this kind of unique application that will differentiate teams in the NBA as data analytics in the league becomes more commonplace.

“Data by itself isn’t going to solve problems. It’s what you do with it,” Edens said.

@gator330 I'll be in training camp but have a great time! Enjoy that #openbar

Social media is one area in which the NBA is leading. Speaking at a panel during the MIT Sloan Sports Analytics Conference earlier this year, NBA Commissioner Adam Silver discussed how the NBA has prioritized social media use, both within the league and among its athletes. The NBA makes sure its players are verified on Twitter and offers social media training to rookies, for starters.

It’s part of the NBA’s larger attempt to build a strong, lasting connection to its fanbase.

“I think our players and our teams like that direct access to their fans,” Silver said. “And increasingly, I find that they like documenting their careers.”

Part of the reason for the emphasis on social media is that, unlike in football or hockey, basketball players play with their faces fully exposed, so fans recognize them more easily than they do athletes from other sports, Silver noted.

Edens also touched on social media during his interview at the On Deck conference. He seemed to both respect and fear the growing influence social media has over the NBA and his team.

“I think that the game of basketball has not changed that much over time. But certainly the social experience is something to pay attention to,” Edens said.

Which leads to the question: Is something lost in our rush to score selfies and check-ins at the game?

“We live in an Instagram and SnapChat culture,” Edens said. “You can lose touch with being in the moment, which is really what sports is all about.”

But despite his concerns about social media’s takeover, Edens remains confident that “the NBA will be the leader in sports technology” and that its leadership in tech adoption will ensure its success for years to come.

Ben Cohen of The Wall Street Journal, who conducted the interview with Edens, pushed back, asking, “More than baseball?”

“I think so,” Edens replied. 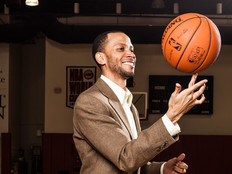 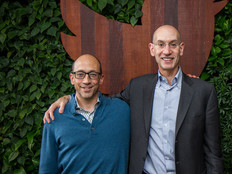 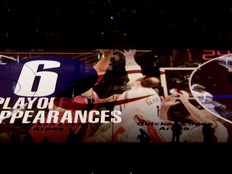