"Managing the equipment has been like night and day. That’s the greatest benefit from the upgrade,” says Okpara Young, the Rockets’ Director of IT and Telecommunications.
Home»Networking

For one weekend this year, the Houston Rockets’ Toyota Center was the center of the sporting universe.

In mid-February, the Rockets hosted the NBA All-Star Weekend. With tens of millions of hoops fans tuning in live from across the globe — and even more following the festivities through social media and the web — the Rockets needed to make sure there were no communications outages at the team’s 9-year-old, 18,000-seat arena.

As preparations began, the IT team studied network stability. The switches in the center’s wiring closets had reached their end of life, resulting in occasional outages. To achieve high availability and reliability, the IT department updated the network with 50 new Cisco Systems switches two weeks before the All-Star tipoff.

“We initially planned for an incremental rollout, but for the sake of making sure all aspects of the All-Star Game were covered, we decided to fast-forward the timeline,” recalls Okpara Young, the Rockets’ director of IT and telecommunications. “We had two weeks to install and configure the equipment. It’s still a blur. We were in the office nonstop for a week and a half. It felt like one long day, but we got it done.”

The All-Star events went smoothly, with no technical difficulties. The NBA West team beat the East 143–138 in the All-Star Game — and now, Young has a blazing fast, highly reliable network to provide the venue ample bandwidth for years to come.

Every department in the Rockets organization relies on the network, from the ticket sales, marketing and administrative staffs to the team’s coaches, who review game footage.

The team’s concessions staff and scoreboard operations crew, who stream live game footage and other content to a new state-of-the-art scoreboard and 400 new high-definition televisions throughout the arena, use their own separate networks, but a portion of their network traffic also travels across the main network, Young says. 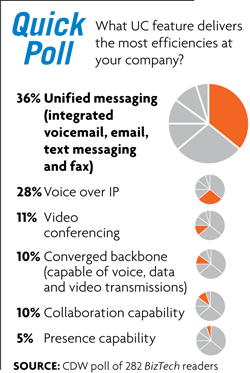 With the new network infrastructure in place, Young says the team is well positioned to adopt new bandwidth-intensive technologies in the future, such as a Voice over IP phone system.

In the meantime, the Rockets are reaping the benefits of a more stable and secure network that is easier to manage and troubleshoot. Networking features built into the new switches allow the IT staff to drill down and pinpoint problems much more easily.

“Managing the equipment has been like night and day. That’s the greatest benefit from the upgrade,” Young says. “Now, we can get more reliable information from the equipment, so it’s a lot less stressful to troubleshoot any potential issues.”

Over the past few years, the Rockets organization has taken a phased approach to overhauling its network. First, in 2011, the IT department upgraded the core, replacing an 8-year-old, gigabit-speed switch with a new Cisco Nexus 7000-series 10 Gigabit Ethernet switch.

As the All-Star Game approached, the team refreshed its edge switches with 50 new Cisco Catalyst 2960S-series switches for the arena’s wiring closets.

The Nexus 7000-series switch offers the Rockets the flexibility the team needs, including a new virtualization feature that lets the IT department create multiple virtual networks for the arena.

Specifically, the Nexus switch supports a technology that Cisco calls “virtual device contexts.” When using it, an IT organization can partition one network into multiple secure networks, each of which are separately configured and managed, explains CDW Senior Network Engineer Jignesh Desai, who in February upgraded the software on the Rockets’ Cisco Nexus switch and installed a license to allow the team to implement virtual switches.

The virtual switch technology makes it possible for the team to isolate its internal network from the networking needs of the arena’s other event users, such as concert providers, a professional wrestling organi­­zation and a minor-league hockey team, Young says.

“It lets us run several parallel networks on our backbone. We have our own internal network, and anything that comes through our doors that is not Rockets-related has its own separate network,” he says. “In essence, it’s a blank network that can be customized to their needs.”

Preparing for the NBA All-Stars 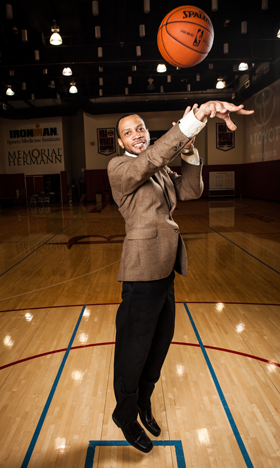 “We had two weeks to install and configure the equipment. It’s still a blur. We were in the office nonstop for a week and a half. It felt like one long day, but we got it done,” says Okpara Young, Houston Rockets’ Director of IT and Telecommunications.

The two-person Rockets IT staff installed the 50 new edge switches with the help of CDW’s Desai. The group worked day and night to meet the two-week deadline before the All-Star Weekend.

“We did a lot of the changes during off-hours,” Young says. “Obviously, we had a few hiccups here and there, but for the most part, users did not notice anything.”

They completed the network upgrade project with a few days to spare, and Young called the All-Star Weekend a technology success. Now, the team’s 200-plus employees are taking advantage of the stability and improved performance of the new network.

The new Cisco Catalyst 2960S switches have more intelligence built in, allowing Young to better monitor the health of the network. If an outage occurs, he can use a command-line interface to pinpoint the precise location and cause, such as a specific switch or even a network port in a wiring closet, he says. The previous switches didn’t have these features, Young says.

“Every small issue before was potentially critical. We didn’t know if it was an individual issue or a broader problem,” he says. “The new Cisco switches give us visibility into the network, and now we don’t have to wonder if a switch has gone out. It just takes one potential problem out of the equation, so it’s a lot easier to troubleshoot.”

With the All-Star Game in the rear-view mirror, Young is moving forward to tackle new technology projects and to take advantage of the souped-up network.

The team is considering whether to implement VoIP, which would lower telephony costs and improve communications for employees. A VoIP platform with unified communications capabilities, such as the ability to instant-message, make voice calls and hold web and video conferences on employee computers, is also an option.

The new Cisco switches have built-in Power over Ethernet, which could power IP phones on employees’ desks. Young says he also plans to explore the full capabilities of the Nexus switch, including its virtual switch technology.

The Nexus switch can serve as the foundation for the Cisco unified computing platform. The IT team will be able to integrate servers, networked storage, networking equipment and virtualization software, which would simplify management and reduce the number of network adapters, switches and cabling needed.

“It was one of the selling points of Nexus,” Young says. “This offseason we want to test these features and look at how we can integrate the Nexus switch into the rest of the organization.” 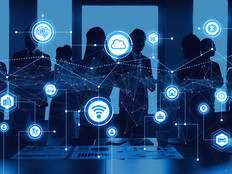