Although “the bigger the better” tends to be the mantra in professional football, the biggest players in the 2015–2016 NFL season won’t be any of the 200-plus-pound linebackers, but instead will be the hundreds of quarter-sized RFID sensors embedded in players’ uniforms.

That’s right: The NFL is one of the first organizations to actually realize the value of the Internet of Things (IoT) future that the IT industry has been talking about. And the league hopes that the data it gathers from these sensors embedded in the players uniforms will improve coaching, preserve players’ health and provide more data and richer experiences for fans, who increasingly crave more ways to interact with their favorite NFL teams.

In an article for CIO, NFL leadership detailed its plans and hopes for the use of more data and the IoT this season.

“The league has been very interested in trying to broaden that and bring new statistics to the fans. Along the way, there's been more realization about how the data can be leveraged to make workflow more efficient around the game,” said Matt Swensson, senior director of emerging products and technology for the NFL, in the CIO story.

For fans, they can expect to see some of this data pop up in the NFL 2015 app for Xbox One and Windows 10, which will allow for “Next Gen Replay.” Fans will be able to see player-specific stats in the highlight clips posted within the app.

Building an IoT Solution for the NFL

The company responsible for pushing the NFL to the IoT forefront is Lincolnshire, Ill.-based Zebra Solutions. The company had been best known for its bar code scanning tech, but after several strategic acquisitions, Zebra found itself on the IoT path. But instead of starting with a small customer, the company decided in 2012 that its RFID technology could have a major impact in sports.

“We started a project in sports,” said Jill Stelfox, vice president and general manager of location solutions for Zebra Technologies, in the CIO story. “What do you need in order to effectively track professional athletes? You need the ability to track a motion in subseconds. Our tags can blink up to 85 times per second.”

Obviously, with individual sensors transmitting data from players, and receivers throughout the stadiums capturing and storing that data, Zebra had to work strategically with the NFL to ensure that the data was transmitted quickly and securely. The company detailed its integration with the NFL’s cloud environment in the CIO article:

Over the course of the season, more than 17,000 plays of NextGen Stats were measured — more than 1.7 billion sets of XY player coordinates measured, transmitted and stored during games.

All that happens in under a couple of seconds.

“The command center is our point of clarity,” she says. “We can see every tag on every player from San Jose when the game is live. If there's something that goes wrong, we know about it very quickly and we have dual recovery. All of that is controlled from a single point of coverage in San Jose.”

With this new IoT solution in place, the NFL is boldly breaking ground by adding a truly digital layer on top of its game. And with technology in the mix, football will shift from a competition between man vs. man to one that’s more like man and machine vs. man and machine. 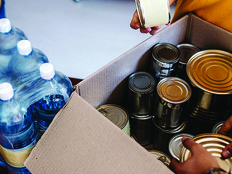