“We have to be able to wear many hats,” Achieva’s Felipe Garcia says. “We don’t have the luxury of having a specialist administer only the SAN or VMware or the application server.”

Every IT department wants to avoid downtime for its mission-critical applications. Achieva Credit Union is no different. So when an unplanned outage stalled the Dunedin, Fla.-based financial institution, its IT team began to rethink the approach it had taken for storage.

In August 2013, Achieva’s storage area network sustained a rare double disk failure, which forced the credit union to roll over some applications to its disaster recovery site. Although the 12-person IT team had adequately planned for such a possibility, the event served as an impromptu DR test and brought to light the deficiencies of the business’s aging SAN.

“Since we weren’t able to have real-time synchronized replication for every application and piece of data, we were forced to go to the auxiliary backup systems, which involve lengthy restore times,” recalls Senior Network Administrator Felipe Garcia. “The process of waiting for backups to restore made us question why we were utilizing a SAN that didn’t offer more flexibility in replicating the entire environment or provide the best data protection. It was time to start looking for a better system.”

With the blessing of senior management, Garcia and his team began examining all possible upgrade options for the SAN, which it had installed in 2009 as part of a sweeping virtualization initiative that included a virtualized desktop infrastructure (VDI) rollout.

The result? Achieva today has a rock-solid tech foundation that will serve future growth.

A Chance for Big Change

Achieva’s IT team recognized that it needed to find a way to replicate data on the production storage system and enhance the ability to withstand the inevitable drive failures inherent to spinning disk-based systems.

NetApp represented Achieva’s ideal choice because its technology aligned with the institution’s most critical requirement — integrating snapshots into a backup or rollback plan.

Garcia and his team needed a storage environment that offered the strongest possible data protection, efficient replication, caching capability and super-tight integration with VMware. The solution had to rely on the iSCSI IP-based SAN standard and provide the same 10-gigabyte connectivity of the existing SAN.

Ease of use also ranked high. As Achieva’s IT team contemplated a new solution, Garcia says he worried that an enterprise-grade, unified storage environment might require some staff members to work exclusively on storage, upsetting his department’s culture. While his team is small, each member is quite hands-on and cross-trained in a variety of skills.

“We have to be able to wear many hats,” Garcia says. “We don’t have the luxury of having a specialist administer only the SAN or VMware or the application server. The new product needed to be something that was feature-rich but also something that cross-skilled individuals could work on and manage.”

Garcia, intrigued by NetApp’s capabilities, was also committed to conducting an exhaustive review of all storage solutions on the market. His team researched the latest solutions offered by top vendors as well as some smaller companies. Achieva invited the companies that seemed to best meet the requirements to take part in a head-to-head SAN competition. NetApp proved itself, Garcia says.

The NetApp solution lets Achieva’s IT team manage storage assigned to VMware from a single console without flipping back and forth between different interfaces. It also has flexible point-in-time snapshot technology that doesn’t require additional software or disk space for managing and storing snapshots.

“What made NetApp most appealing to us was the maturity of the platform, the ecosystem of support out there and the fact that it’s been around for a long time,” Garcia says.

To help with the installation of the NetApp FAS8020, Achieva worked closely with CDW. The implementation took place over just five days.

“I think they have a much greater understanding of what goes into the configuration now and how it all works,” says CDW Senior Engineer Joel Nordsving.

The team’s bent toward “self-sufficiency,” as Garcia characterizes it, enabled Achieva to enjoy an easy transition to the new SAN.

So far, Achieva has not experienced any downtime, and the IT team can now keep more backup copies and deploy new servers quickly.

The institution’s 400-seat VDI deployment now runs on a NetApp Common Internet File System, which “can put a lot of strain on a SAN,” Garcia acknowledges, but the new solution handles it easily.

Employees no longer experience frustrating file lock or latency issues, desktop sign-in times have improved dramatically, and applications and data are transferred to desktops in microseconds.

Because the new system supports two distinct work-loads — storage and VDI — “that’s cut down the need to administer two different systems. We’re just putting all of our resources into one centralized SAN, and it does it better than before,” Garcia says.

The IT team also can vary how often it takes snapshots, capturing important volumes (such as customer-facing applications) frequently.

And the team is no longer forced to choose which applications to replicate to the DR site — important not only given their past experience but also because of Achieva’s location in the middle of Florida’s hurricane alley.

Achieva next plans to roll out a new, more complex home banking system because the SAN can handle the increased requirements for back-end storage.

The NetApp SAN is now positioned as the cornerstone of what Achieva Credit Union offers its members, Garcia says, allowing the institution to continue to innovate and roll out more sophisticated capabilities as its business grows.

The 4 Keys to Achieva's Storage Success

Here are four takeaways from Achieva Credit Union’s revamp of its storage system that other companies can borrow should disaster strike: 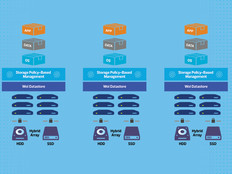