To a lot of longtime Windows users, the transition from a PC notebook to a Chromebook might seem a bit odd at first.

In many ways, a Chromebook is more similar to a thin client, where much of the information and applications are available only when connected to a network. But after a little while, many users will likely come to see the Chromebook as a highly efficient, highly mobile way of conducting business.

Security on the Acer C720 Chromebook is tied to a user’s Gmail login. Even when working offline, users still need to enter that password. Once Google authenticates the user and establishes a connection, all of the user’s Android-based apps are available, even if they were purchased elsewhere on other devices, such as a smartphone. The Chrome Web store is quite robust, with thousands of apps across all categories.

Business users will likely want to start with Google Documents, which comes loaded on the C720. It’s a good word processing program and has a big advantage in that it allows for collaborative edits with other users online, That’s a nice way to tie an entire team together for a brainstorming or editing session — even if members are widely dispersed geographically.

Using the webcam with its 1280-by-720 resolution makes full-scale presentations possible. Plus, it really helps to provide that in-person feel, especially when used for collaborative editing.

Additionally, many of the apps, especially those in the productivity category, allow offline use once installed. Google Documents and Microsoft Word files can both be opened and edited without a connection.

And, when working on the C720, files, photos and application data can be set to automatically backup to Google cloud storage, so nothing will be lost, even if the notebook is damaged or stolen. The Acer C720 comes with 100 gigabytes of free Google Drive storage space, more than enough to last most users a very long time.

With eight hours of battery life and a healthy suite of productivity apps, the little 2.76-pound Chromebook C720 might make larger devices seem a bit bloated by comparison. Although it probably wouldn’t work for power-users, many business users will likely find the C720 delivers more than enough power and security to meet their work and travel demands — and at a fraction of the cost of most Windows-based notebooks. 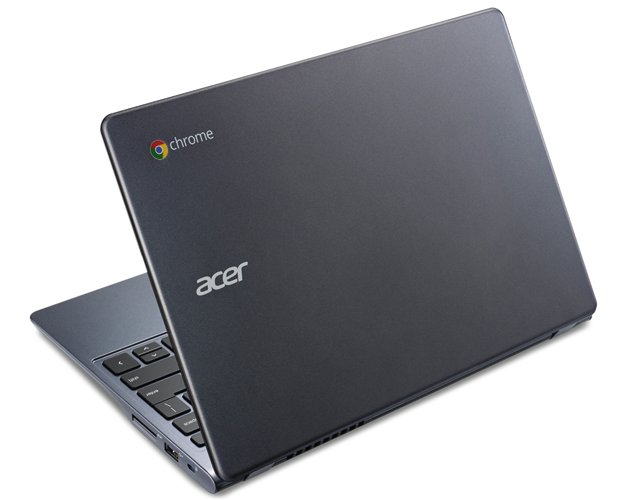