Andrew McIntyre and Justin Piper spearheaded the Cubs’ network and communications upgrades. “It’s all about productivity and efficiency,” McIntyre says.

On April 23, 1914, when Weeghman Park opened on Chicago’s North Side, 21,000 people flocked to the 14,000-capacity stadium. A hundred years later, fans still pour into Wrigley Field, but they’ll soon have a restored and tech-friendly ballpark in which to cheer on the Cubs.

The front-office goal is straight­forward and aggressive, like the team’s on-field style: Transform its facilities from among the oldest and smallest in Major League Baseball to best-in-class.

To date, the organization has ­completed three major construction projects in two years, adding a new ­office in Chicago, a baseball academy in the Dominican Republic, and a ballpark and player development facility in Mesa, Ariz. All three facilities sport state-of-the-art IT infrastructure to support staff and visitors locally and to enable greater communication and collaboration across the sites. Now, the club is preparing for the final phase: restoration and ­expansion of Wrigley Field. The team formally announced it would move forward with its renovation plans for Wrigley Field on Wednesday.

“The projects are all part of the Cubs’ strategic plan,” says Andrew McIntyre, the club’s senior director of IT. “They’re stepping stones toward building the best organization in baseball, on and off the field.” 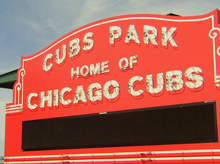 Learn more about the Cubs' efforts in this CDW video case study.

Before construction began, the Cubs had the dubious honor of having the smallest front office in the league. When the Ricketts family bought the Cubs in 2009, they launched an initiative to transform and grow the business. As they hired staff, it soon became clear that Wrigley Field didn’t have the office space to accom­modate the newly acquired talent, so they added trailers outside the ballpark.

“When we hit our fourth doublewide, the family and senior leadership team decided it was time to bring people together under one roof,” McIntyre says. That set plans in motion for the Cubs’ new office.

“With the new facility, we could redesign how we ­communicate, how we interact, how we work together,” he continues. “And it helped us get to know each other on a personal level, especially ­during this massive transformation that was occurring.”

The Cubs started construction in December 2011, taking a former warehouse and garage on Clark Street down to the studs and then building it back up. In addition to designing and building a new core IT infrastructure with the assistance of CDW, the Cubs looked to replace the strategic applications used by the various business units. Before the move, most were running Microsoft Office 2003 and Windows XP with ­limited Internet access and a 12-year-old analog phone system.

“You could almost look at the Cubs as a 100-year-old startup,” McIntyre says. “We had outdated IT systems and processes across the organization. There was a lack of investment on the IT side.”

So the IT team ­developed a plan to build a scalable, redundant infrastructure and network. Its first task was to quadruple network bandwidth. For the core network, McIntyre and his team implemented Cisco Systems Catalyst 4500-X and 2960-X series switches, along with Cisco 5515 Adaptive Security Appliances and a secure IPSec virtual private network (VPN) between locations.

“The infrastructure upgrades were all enablement tools to help us deliver strategic applications that leverage the cloud, the web and Software as a Service for efficiency, communication and collaboration gains,” McIntyre says.

As the Cubs designed the new front-office building, McIntyre and his team set their sights on major development projects planned for Mesa, the Dominican Republic and — ultimately — Wrigley Field. Their top goal was to ensure that staff would have a unified experience across all of the team’s facilities.

For years, the Cubs had been renting a facility in the Dominican Republic to house its Latin American training academy, where it prepared inter­national players to come to the United States. There was just one problem.

“We were in the worst facility in the Dominican Republic,” McIntyre says. “Now, we’re in one of the best.”

To attract and recruit talent, the Ricketts family built a new academy and living quarters. They opened the new facility in spring 2013.

Increased bandwidth has improved productivity at the academy, and the VoIP system has slashed costs on ­international calling.

In January 2013, when Justin Piper ­arrived in Mesa for his first day as the general manager of the Cubs’ spring-training business operations, the facility didn’t exist yet.

“They were ­moving dirt and doing all the utility work,” Piper recalls.

The team had previously worked out of two Mesa sites, Hohokam Stadium and Fitch Park, for year-round training. “We were looking to upgrade our facilities and bring them all together into one space,” Piper says.

Construction crews started laying the foundation in April. By August, it was time for CDW Network Associate Engineer Kaley Cline to spend a week at the new Arizona facility installing the network infrastructure. Designed and configured in the months before the Mesa install, the Cisco switches were staged once Cline arrived onsite.

McIntyre says the Mesa network was the most complex of the Cubs’ IT projects to date. It had to support a player development center and ballpark, as well as support staff and vendors operating onsite.

“You just keep layering more and more complexity and more and more services on, which means your network and your infrastructure needs to be that much more robust to support them,” McIntyre says.

In addition to the core networking requirements — providing access to the Cubs’ internal network in Chicago through VPN tunnels, a guest network for visitors and an internal network for the VoIP phone system — the Mesa network had to support ticketing and point-of-sale operations, security and other services.

When team staff and executives sit down in their offices in Mesa, it’s the same user experience as when they are in Chicago, Piper says.

That shared experience, built on an enterprise infrastructure consisting of Cisco tools, means it’s easier than ever for the IT team to manage its facilities, the training academy in the Dominican Republic and — up next on McIntyre’s roster — Wrigley Field.

When he thinks back about “the adventure we’ve been on the last two years,” McIntyre becomes excited about the future.

The old Cubs IT infrastructure was not equipped to handle the business of running and managing a Major League Baseball team, he says. “It was running on bubble gum and duct tape.”

But the team has upgraded most of its facilities and network and rebuilt its IT infrastructure from the ground up.

“Now we’re focused on Wrigley Field,” McIntyre says. The IT team wants to finish its massive infrastructure overhaul with a home run.

The $300 million, four-year plan for the Chicago landmark calls for updating everything from the façade that adorns the ballpark to the clubhouse used by players. It will also add more modern amenities for fans, upgraded seating, a larger variety of concessions and open-air spaces.

McIntyre and his team look to lessons learned during the past two years to inform their technology plans for Wrigley Field. “The end goal — there’s only one goal — is to win the World Series,” he says.

“And I think what we’ve been able to demonstrate is there are a ton of wins along the way.”

With CDW’s assistance, the Cubs IT team first looked at all of the team's data and voice needs, and then worked to build a long-term deployment strategy. Ultimately, the plan outlined how the organization would build a scalable, redundant infrastructure and network, McIntyre says.

“We really look to protect client investments,” says CDW Project Manager Joe Orozco. “We do things once, and we do them correctly.”

“That was a huge asset for us, because they saw where we were going, and they were able to help us design and develop a solution that would meet our needs, not just for now but for the future,” he says.

It was a great partnership, says Orozco, because the Cubs’ technically savvy IT team was open to the ideas and expertise that CDW brings to the table. “They view CDW as trusted advisers, and that’s really what a partnership is,” he adds.