If you had to assign a breakout year to mobile technology, 2007 would probably be it. After numerous baby steps, the market took a great leap forward with the rollout of the first iPhone that June, followed by Google’s mobile platform, Android, in November.

Though the first Android phones weren’t released until the following year, 2007 saw the creation of the Open Handset Alliance — a now 84-member consortium of handset makers, developers, chipmakers and carriers devoted to the deployment and success of Android as a mobile device platform.

The Palm Foleo was developed as a notebook-like companion for smartphones, particularly for the company’s popular Treo line that was intended to revolutionize the mobile space. But things didn’t go as planned.

The Foleo was a small (not quite dumb) terminal with a 10-inch display and a full-sized keyboard. It ran on a modified Linux kernel and would have allowed people to do work (basic email, document creation and editing, web browsing) with or without a smartphone connected. A touch of a button automatically synchronized data back and forth between the Foleo and the Treo.

Leading up to the official Foleo announcement, Palm co-founder and resident genius Jeff Hawkins excitedly talked about the new product as a “third arm” of business for the company, along with PDAs and smartphones. In fact, Hawkins was so bullish on the Foleo that after its unveiling he spoke of it as “the best idea I’ve ever had.”

Nonetheless, within a few months of its introduction, after it was widely panned by media and analysts who doubted that users wanted another expensive device to carry around, the Foleo was history. Palm canceled the product, taking a $10 million hit, before the first version shipped.

"In the course of the past several months, it has become clear that the right path for Palm is to offer a single, consistent user experience," wrote Palm’s then-CEO Ed Colligan on the Palm blog at the time. "To that end, and after careful deliberation, I have decided to cancel the Foleo mobile companion product in its current configuration and focus all our energies on delivering our next-generation platform and the first smartphones that will bring this platform to market."

Palm eventually did release that platform (the WebOS) and a line of smartphones (the Pre and Pixi) to positive response and some success in 2009. But it was too little, too late. HP acquired the company in 2010 and released a few new handsets and a tablet, including the WebOS-run TouchPad in 2011. But after the TouchPad failed to make a big splash, HP ceased development of WebOS products; in February, it sold WebOS to LG Electronics for use in (of all things) smart TVs.

Considered a disaster in its day, the Foleo now seems more like a noble failure. The device’s promise of tighter integration between small and large computing hardware platforms foreshadowed many elements of the technologies, products and services taken for granted in today’s BYOD world. But it lacked the refinements that make modern tablets and smartphones, as well as cloud computing and synchronization services, so popular with users.

Around the time that Palm killed off the Foleo, the first netbooks appeared. For a while, these small, lightweight, cheap (many cost less than the Foleo) and full-powered mini notebooks capably filled the niche Palm envisioned for the Foleo. Now, many would argue, tablets are taking the place of netbooks. 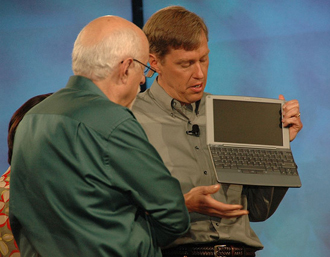 The advancement of touch screens through capacitive and multitouch technologies, first widely implemented with the iPhone, greatly increased the usability of smartphones. This, and the development of thinner, less resource-hungry operating systems for smartphones, have led directly to the tablet — for many, the mobile platform of choice.

Meanwhile, cloud computing and synchronization services (such as Apple’s iCloud or Dropbox) make it easier than ever to sync data between multiple computing devices. This progress means users can switch from desktops, notebooks, smartphones, tablets — and even televisions — seamlessly and without any loss of data.

The Foleo’s role as a mobile device companion is echoed today by device cases with integrated keyboards that can turn a tablet or smartphone into a notebook-like computer. Microsoft has even made keyboard cases standard for its Windows 8 Surface tablet, in an attempt to separate it from the pack and increase its perceived usefulness as a notebook replacement. And although not nearly as popular, a number of smart docks have come and gone (including from Android phone giants Samsung and Motorola) that could give a smartphone the qualities of a notebook.

Then there is Google’s Chromebook: a thin client (Chrome OS) notebook that derives most of its capabilities not from a traditional heavy-duty operating system, but from a connection to the Internet and the cloud — which makes it not unlike the Foleo’s reliance on a Treo and a wireless connection to maximize its core functionalities.

Hindsight is 20/20, and for numerous reasons the Foleo didn’t catch on. But one of the reasons cited back in 2007 — the idea that people wouldn’t want to carry around multiple mobile devices — was dead wrong. Isn’t that exactly what many users do today? Smartphone in one hand, tablet in the other, and a notebook on the lap.

The Foleo clearly wasn’t Hawkins best idea ever, as he claimed at the time. But six years later — an eternity in the tech world — we can look back and appreciate how the Foleo, and the company that built it, anticipated our key aspects of mobile culture and the technology that drives it.