Thousands of organizations have reaped the agility and scalability benefits of cloud computing. However, few have embraced the cloud with as much zeal as D+M Group – a Bain Capital portfolio company.

The firm’s brands are recognized for advanced digital technology, high-performance engineering and unique designs – all delivering powerful audio and video experiences. The prospect of greater efficiencies and less redundancy prompted the distributor of high-end audio and video components to migrate computing to the cloud.

When it came time to consolidate and rationalize the scattered data centers, hardware, operating systems and software of its various acquisitions, D+M’s IT department took the cloud plunge with gusto. The company consolidated 15 international data centers into three hybrid clouds, hosted by Datapipe and running on its high-performance Stratosphere Elastic Cloud platform.

Advantages include a much leaner, more agile IT organization that can ramp up new applications and technology in a fraction of the time it used to take – with no need for additional in-house expertise.

Costs are much more predictable than they were when IT was purchasing, configuring and troubleshooting a lot of its own hardware and software. And thanks to Datapipe’s Stratosphere Elastic Cloud, D+M can scale hardware and software on demand to maintain performance during peak usage periods.

The cloud overhaul was quick and relatively easy, thanks to a comprehensive network, asset and virtualization analysis from CDW. In fact, CDW was responsible for bringing D+M Group and Datapipe together in a perfect marriage, according to John Jackson, vice president, Global Infrastructure and Procurement at D+M Group.

From Scattered to Consolidated IT

Formed in 2002 from the merger of audio giants DENON and marantz, D+M Group comprises audio and video electronics brands, including ALLEN&HEATH, BOSTON acoustics, CALREC AUDIO, DENON, marantz and PREMIUM SOUND SOLUTIONS. Together these brands manufacture and distribute consumer, professional and automotive market video and audio solutions across the U.S., Japan, Europe, the Middle East and Africa.

The company employs more than 2,000 workers, mostly in Japan, Europe and the U.S. And its products and services are marketed in more than 45 countries.

As with many video and audio solution businesses, D+M Group is undergoing a transition from a focus on traditional audio and video to mobile media applications. Currently, D+M has an IT staff of approximately 45, mostly in Mahwah, N.J. and Japan.

As a result of its acquisitions, the company found itself with an assemblage of siloed IT organizations spanning a number of continents. More specifically, the company’s IT assets were scattered across multiple global data centers and running highly disparate hardware, operating systems and software.

When Jackson came on board in 2011, he knew immediately that the company would have to consolidate its IT services into a single, efficient organization and infrastructure.

As D+M IT decision-makers analyzed the situation – guided by CDW network, asset management and virtualization assessments – it became clear that this was a moment of opportunity for a complete paradigm shift to a single pool of shared cloud services.

“We spent a lot of time selling all the existing IT organizations on the cost, efficiency and agility benefits of cloud-based technologies,” Jackson says. “Today 90 percent of what we do is cloud based. Everything we used to do internally is now part of a pay-as-you-go or pay-per-use solution.”

Why the Cloud Made Sense for the D+M Group

In the migration process, Jackson has become a cloud convert.

“As we started making changes, it became more apparent that the quickest most efficient way to add new IT value to the organization was to find someone who was already proficient in the area in question,” he says.

Interestingly, initial cost savings was not the main driver of D+M Group’s move to the cloud, but rather agility and total cost of ownership (TCO).

“The reason we moved all our email to Office 365 was not because it was less expensive than running Exchange internally. It was because we realized we wouldn’t have to spend time and resources doing our own upgrades and building new skills around messaging,” Jackson says. “That was a very compelling business case.”

The firm consolidated its 15 data centers into three of Datapipe’s global facilities in Hong Kong, the UK and Somerset, N.J. All are managed as IaaS deployments through Datapipe’s globally available Stratosphere Elastic Cloud platform.

D+M deployed a hybrid cloud architecture, mostly through Datapipe. Some services are provided through virtual machines housed on Datapipe’s shared public cloud servers. Other applications sit on physical servers owned and managed by Datapipe but provided exclusively as a private cloud to D+M.

In the process the level of virtualization has increased from about 18 percent of servers and storage to about 75 percent today. Overall, the firm has consolidated 134 physical servers into six.

“We run whatever we can in a virtual environment but we’ve found that there are some applications that just aren’t well suited to that architecture,” Jackson notes.

For example, D+M’s web servers run in the shared environment, while its back-end database servers have been deployed in the private cloud.

“Datapipe allows customers to take advantage of multiple cloud paradigms to get the perfect fit for their needs,” says Joshua Pemrick, global sales manager at Datapipe. “It allows them to grow in a truly elastic manner in the way that’s most pragmatic for them.”

“Ultimately, the goal is not to own any equipment at all and have the ability to scale up and down as we need to,” Jackson adds. “That’s the biggest benefit of cloud computing through Datapipe.”

Other functions, such as D+M Group’s messaging and collaboration, human resources, enterprise security and service desk functions, are outsourced via software and business as a service (BaaS) scenarios. 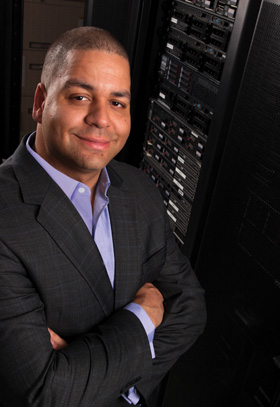 “Today 90 percent of what we do is cloud based. Everything we used to do internally is now part of a pay-as-you-go or pay-per-use solution,” says John Jackson, Vice President, Global Infrastructure and Procurement for the D+M Group.

The benefits of D+M’s cloud transition have been dramatic, particularly in the realm of business agility.

“In the past, we would need a month to spec and purchase servers and install, configure and deploy new servers or applications,” Jackson says. “With the cloud, we can deploy new applications within a little more than a week at most, sometimes in a matter of hours.”

Cost prediction is also easier. “Prior to moving to Datapipe, we could never predict accurately what a new application or other IT function would cost,” he says. “Now we can predict the cost of new cloud-based applications with ease.”

jacTCO is another factor. Jackson estimates that previously the company was paying about $7,000 per year per server in Japan. That figure has been reduced to about $3,000, including all the network, hosting and management requirements.

Finally, D+M has been able to reduce its IT head count. The company has been able to focus its resources on providing value to the business and customers rather than managing and troubleshooting technology.

A Cloud Match Made in Heaven

The biggest benefit of using Datapipe has been the operations expertise they’ve provided to D+M Group’s IT department.

“The team assigned to our account is outstanding,” Jackson says. “They really operate as an extension of my team, which is invaluable in an organization with more high-level than technical resources. They’ve helped us meet countless challenges related to planning ahead, addressing performance issues and migrating across data centers.”

In fact, Datapipe’s flexibility and willingness to share its operations expertise was what attracted D+M to the cloud provider in the first place.

“Originally we assumed it would be easiest and most cost-effective to work with a cloud provider linked to our communications carrier – since we already had that relationship,” Jackson says. “Still, we decided to look at several other companies.”

In the meantime, D+M Group had engaged CDW to provide a comprehensive network, asset, and virtualization assessment. In the process, CDW suggested that the company add Datapipe to its list of potential cloud providers.

“I was reluctant because I felt that evaluating, choosing and engaging a new provider at that late stage would just take too much time,” Jackson says. In the end Datapipe’s value-added services and flexibility won D+M’s business.

“What were typically professional service engagements and added costs, with other providers, were part of the core services provided by Datapipe,” notes Jackson.

What D+M found truly extraordinary was that Datapipe was willing to start building out servers during contract negotiations, knowing that D+M had to deploy a new ecommerce solution quickly.

“By the time we signed the contract, we already had servers and other things in place and ready to go,” he adds.

Datapipe’s flexibility proved invaluable in other areas as well.

“We couldn’t afford to work with a provider that would be rigid in its expectations of how we would communicate our requirements,” he says. “Datapipe was very accepting of our requirements, which really made a difference.”

Aside from leading D+M Group to Datapipe, CDW’s comprehensive asset, network and virtualization assessments provided much valuable insight on where the consolidation opportunities lay and how to make the move to the cloud.

“We were able to see where we had to focus and consolidate first,” Jackson says.

“D+M Group was a customer with multiple data centers, disparate hardware and an IT staff spread across the globe,” says Sander Campbell, CDW account manager. “They were very honest about the challenges they had planning sourcing and supporting hardware and software across so many locations. Our assessment was aimed at helping devise a strategy that would make them much more nimble and efficient.”

Going forward, the company hopes to work on refining and tightening its IT processes, including project and change management.

“Thanks to CDW and Datapipe, we’ve significantly enhanced our situation from where we were just two years ago,” Jackson adds. “We understand much better where we stand and where our challenges are. Now it’s time to focus on process and taking advantage of the business benefits of mobile technologies.”