Hyper-V is Microsoft's virtualization technology that has been built into Windows Server 2008 and later versions. With Hyper-V, you can consolidate workloads to reduce server sprawl and make more efficient use of your hardware resources.

Instead of having a separate server for each application, there are a number of virtual machines running on a single high-powered Hyper-V host.

But before jumping on the server-consolidation bandwagon, you’ll need to make some decisions. One of the most important involves the kind of virtual disks each virtual machine will use in an environment.

Here are some advantages and disadvantages to the different types of virtual disks and virtual disk formats supported by Hyper-V for production environments.

In terms of advantages, dynamically expanding virtual disks have flexibility, because they allow "thin provisioning" of virtual machine storage rather than allocating it in full, up front. They also enable rapid provisioning of storage, since it takes almost no time to create a new dynamically expanding virtual disk. This makes them ideal for test environments where there’s a need to quickly spin-up new virtual machines for testing or development purposes.

Unfortunately, one of the guest’s applications goes awry and keeps writing files to the virtual disk, causing the virtual disk to grow until it reaches its maximum size, whereupon that single virtual disk takes up all available space on the 2TB host physical drive. At that point, the host chokes, and all the virtual machines freeze up.

The key to using dynamically expanding virtual disks in a production environment is planning the storage requirements carefully, so the host isn’t unexpectedly overloaded.

There are some advantages to using fixed-size virtual disks, even though they take up so much host storage when they are empty. First, predictability: By creating only fixed-size virtual disks for virtual machines, you can be sure you won't run out of storage unexpectedly on the host. Second, reliability: If a power failure hits the data center and affects the host, any dynamically expanding virtual disks in use can become inconsistent, causing their virtual machines to fail. 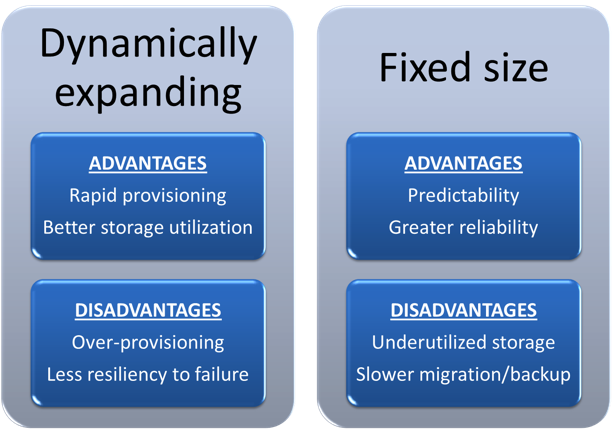 Beginning with Windows Server 2012, you'll also have another decision to make when you create a new virtual disk: whether to use the legacy virtual hard disk (VHD) format or the new VHDX format.

When comparing VHD vs. VHDX, here are the four main advantages of using VHDX:

When you create a new virtual disk in Hyper-V on Windows Server 2012, the New Virtual Hard Disk Wizard defaults to using VHDX instead of VHD, so you can take advantage of the benefits listed above. The only reason you might want to use the legacy VHD format is if you want to migrate the virtual machines to a down-level host running Windows Server 2008 R2. The Wizard also defaults to creating the new virtual disk as a dynamically expanding one, unless you choose otherwise. 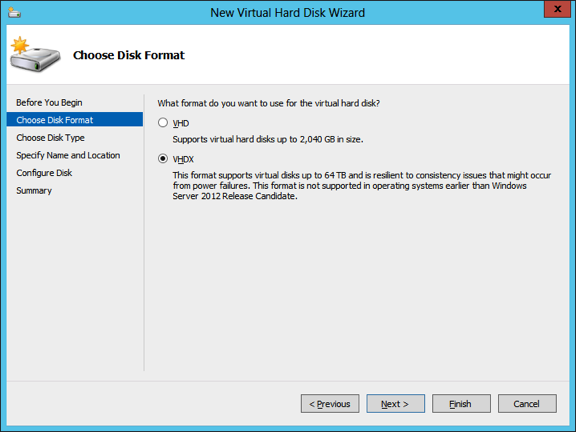 Whatever choices you make when planning virtual machine storage, be sure to plan ahead and make your decisions based on the needs of your particular environment.