Making a difference — that’s why Jerome Quiroga is excited to come to work each morning.

“So many people in technology are in technology for the fun of it, but we actually are making a difference with our cloud computing company,” says Quiroga, vice president of information technology at ATS Cloud in Dallas. “I think that’s what makes it cool and rewarding to me. It’s not just taking over IT stuff to make a dollar. It’s actually making a difference and making other people’s companies more productive and more financially viable in the SMB market.”

Founded just three years ago, ATS Cloud was one of the first companies in the United States to bring to market secure, private-cloud computing services specifically for small and medium-sized businesses. Already, the subsidiary of ATS National has attracted a large variety of clients — from hospitals and medical practices to law firms and “Main Street” businesses — that share a critical need to safeguard vast confidential and sensitive applications and data stores.

In fact, demand has been so great that ATS Cloud has tripled its size every year since it opened its doors and now serves businesses and organizations far beyond Texas. Last year, that speedy growth compelled the company’s senior management to begin looking for a way to provision new systems environments more quickly, while continuing to provide fast, reliable and cost-effective back-end performance.

Around the same time that ATS Cloud’s management team was rethinking how to maintain its systems infrastructure amid continuous growth, the Virtual Computing Environment Co. — a joint venture of VMware, Cisco Systems and EMC — released Vblock. Vblock couldn’t have been a better fit for ATS Cloud, which had built its existing IT infrastructure on Cisco networking, VMware server virtualization and EMC storage systems.

Nicknamed “cloud in a box,” Vblock is a converged infrastructure — a cloud building block that combines the compute, storage, virtualization, network and management components necessary for a private cloud, all configured and tested as an integrated whole. Because of its inherent efficiency, each Vblock module requires only a small data center footprint. It yields a lower total cost of ownership because it depends on less server space, less power and fewer servers to achieve the same levels of productivity as comparable individual components.

“Our first option was to build something ourselves to achieve our goals,” says Steve Willard, ATS Cloud corporate vice president. “The way we looked at it was, if we wanted a car, we could buy all the pieces we needed to build one, but if there was a car for sale that had already been built and met our specifications, why not go ahead and just buy that car?

“Vblock is built and arrives on a pallet, and all you basically do is unbox it, plug it in, turn it on, configure it to your environment, and you’re good to go,” he continues. “It just made sense on every level.”

ATS Cloud has made a name for itself by identifying and filling a unique market need within the burgeoning cloud services industry. The company works as a seamless extension to smaller enterprises that don’t have the internal resources or expertise required to achieve the kind of secure and high-performance computing they need to succeed in a highly competitive marketplace.

By enabling a convenient, cost-effective way for SMBs to add capacity and highly secure IT capabilities on demand, ATS Cloud can maximize its end users’ IT performance at a predictable and more affordable price, Willard says.

“By moving to our cloud, end users are inherently more secure, they’re more compliant with industry-specific data regulations, and they can focus on doing what they do best and leave the infrastructure to us,” he says, adding that ATS Cloud is now going through ISO 27001 certification, proving the high quality of its information security management systems. It’s a step that few cloud providers have taken, Willard notes. 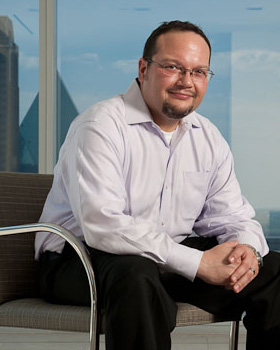 "A user wouldn’t even realize that they’d been moved to a Vblock on the back end — except for suddenly noticing that they were getting much better performance," says Jerome Quiroga, Vice President of Information Technology at ATS Cloud.

ATS Cloud currently operates two large data centers, one in Dallas and another in Las Vegas (and an office in Santa Monica, Calif.). Its data resides on eight EMC storage area networks.

“We’re basically a best-of-breed shop,” Quiroga says. “To ensure disaster recovery capability, we do replication across the two data centers so that we’re topographically and geographically diverse. With our storage, we do unique tiering so that we can go from solid-state to fast-cache capability all the way down to archival storage. For this reason, we’re able to give our end users a blend of input/output speeds, availability and cost.”

Bringing Vblock into this environment gives ATS Cloud the ability to scale operations quickly as it adds new end users, as well as plan for expansion to a third data center in the near future.

Getting company executives to buy into the plan to optimize its virtualized data operations required making a detailed business case, Willard says. Some members of the management team were worried about risk, and justifiably so: The Vblock product had just been released, and VCE itself had been established only nine months earlier.

“They wanted us to put together a business case around the VCE Vblock and the configuration to be sure that the product would do what we thought it would,” Willard recalls. “We were happy to do that.”

Willard and Quiroga immediately contacted CDW, which Willard refers to as “a great go-to company” when ATS Cloud needs an immediate response to its questions. “They can turn a project efficiently and cost-effectively,” he says.

CDW brought in several VCE consultants, who together worked on the business case and likely procurement process. VCE assessed and tested the ATS environment to determine how best to structure the Vblock to serve up ATS Cloud data. 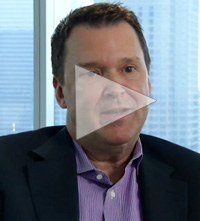 Watch and learn how ATS Cloud gave its infrastructure a boost with Vblock.

“We’re a little different than, say, a shipping company or some other traditional business that might need Vblock to do X, or one function,” Quiroga says. “We’re a cloud company, and we need it to do X, Y and Z. So for us, it was a longer process because we had to show that it could, in fact, do all these things.”

Eventually, the IT team was able to develop a business case with the numbers and facts to demonstrate that migrating to Vblock was ATS Cloud’s best course, especially because the integrated approach would simplify ongoing support, maintenance and upgrade tasks.

“With what we had before, we might have patches coming out at the same time or different times for EMC, Cisco and VMware. It was up to us to figure out if all these patches would work or determine if one might adversely affect another,” Quiroga says. “Now, we get one patch from VCE that incorporates any and all changes and updates from EMC, Cisco and VMware. They’ve already tested it and certified it, so I know that one patch will definitely improve operations — not unexpectedly bring us down.”

Likewise, if there is a performance issue, the IT team needs to call only one support team, not three, to troubleshoot and resolve the problem.

Still, it was critical that the IT team familiarize itself fully with the various components that made up the new product. ATS Cloud went so far as to recertify staff members on the different platforms, then took the time to ensure that the Vblock configuration was as close to perfect as possible. 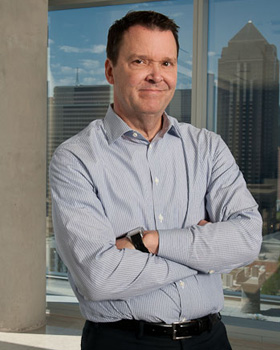 "Vblock is built and arrives on a pallet, and all you basically do is unbox it, plug it in, turn it on, configure it to your environment, and you’re good to go. It just made sense on every level," says Steve Willard, ATS Cloud Corporate Vice President.

“By doing that, we were able to drop it in, stand it up and start using it right away,” Willard says. “Taking the time up front to do everything right is critical to success.”

In late 2011, having made a successful business case and garnered the approval of the entire management team, ATS Cloud purchased the world’s 142nd Vblock — one of the first in Dallas. Being an early adopter, however, hasn’t resulted in any major issues or concerns for the company.

“Our ability to meet our service-level guarantees is critical to our ability not only to serve our end users but for us to actually stay in business,” Willard says. “So we’re not going to put in something that we think might work — we know it will work.”

In fact, the pretested, pre-validated and pre-integrated design of the Vblock product has maximized the availability of the ATS Cloud offering, allowing the company to predictably scale its environment without disruption to existing end users. Willard says that once in production, the Vblock product worked exactly as expected, maximizing end-user input/output speeds, response time, uptime and other metrics that make up service-level agreements.

“A user wouldn’t even realize that they’d been moved to a Vblock on the back end — except for suddenly noticing that they were getting much better performance,” Quiroga says.

One of ATS Cloud’s largest end users, a medical group with 800 users, saw an instant, across-the-board increase in response times. The change prompted the company’s in-house tech manager to call Quiroga to ask what had changed in the infrastructure.

“Third-party database administrators have also noticed, and they’ve made inquiries about what we’re doing to make their products run so much faster,” he says. “They want to tell their other customers that they should move to our cloud.”

Although Vblock has already had a significant effect on operations, ATS Cloud’s team says it’s just getting started. The company intends to purchase more Vblock units and will roll them out over time at its Dallas site, then in Las Vegas, as well as at a third data center to be unveiled later this year.

35 Racks
The data center footprint that ATS Cloud recouped by migrating to Vblock.

“We will be bringing more Vblocks in, migrating our users over and then phasing out the older equipment,” Quiroga says. “It’s something that we have planned but will just take time.”

“It will give us an ease of data replication and high availability. The ability to guarantee availability and uptime throughout the entire cloud — not just the physical building but all the way through compute storage — is very important to us,” Willard says. “Having Vblock in place will give us that ability. We’ll be able to expand very rapidly and keep moving forward in a way that end users never see an impact — except when it’s to the good.”