Have you ever jammed your smartphone into your back pocket, only to forget until you hear that crunching sound of glass, metal and plastic as you sit down? Once you realize what’s happened to your now nonfunctional device, you might feel like you’ve lost your best friend.

Smartphones and, increasingly, tablets have become essential pieces of technology for most of us, managing our day-to-day activities and linking us to the world at large through sight, sound and information. And mobile devices are useful not only for consumers (no more grocery lists scrawled on scraps of paper), but also for workers in the field, who get more work done in less time (no more trudging back to the office to file tedious paperwork).

So what are users doing to protect their investment in mobile computing?

Derek Smith, vice president of sales and marketing at ZAGG, a mobile-device accessory company, says when it comes to mobile devices, some people learn the true value of what they have only when it’s gone.

“Once you actually experience a loss of your smartphone, you gain a much greater appreciation for how important it is to protect it,” he explains.

Tales from the Smartphone Crypt

But the most amusing story came from Emily Walker, a reporter for MedPage Today.

“At one job, I dropped my BlackBerry in the toilet and it died. I told a few people who sat near me about what I did. I did not tell the IT guy. When I handed over my BB to the IT guy, I explained that I dropped it in a cup of coffee and he responded ‘Oh, so you're not the person who dropped it in a toilet?’ I responded, ‘Oh, you heard about that? Well, yeah, that was me.’ I've never had someone look at me with such disgust.”

No More Worrying About Water 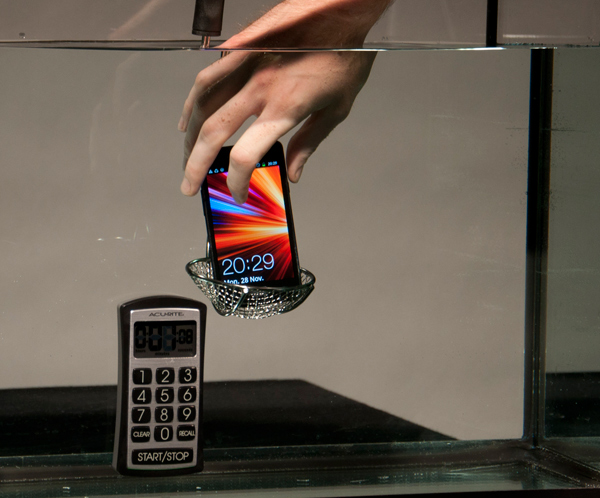 A demonstration of Hz0 technology at work on a smartphone underwater.

There might be relief from water damage for mobile users in the near future. ZAGG has acquired the rights to Hz0, a form of nanofilm technology that essentially waterproofs mobile devices from the inside out.

While this technology has the potential to save mobile devices from a watery death, Smith points out that it will also protect against humidity.

“In some of the more humid climates, it's not uncommon for electronic devices just to stop functioning after a year or so because the humidity is so high and the water gets in there and damages the circuitry,” Smith says.

According to Smith, the technology was developed in Boston by a maritime group after a colleague fell overboard and clung to the side of the vessel for 25 minutes on a rope. He had a cell phone and a radio, but both were useless once they hit the water. The loss of their colleague spurred the team to develop a waterproofing product that might have saved his life, Smith says.

ZAGG acquired what ultimately became the Hz0 technology and spun it off into its own company. Recently, the technology made a splash at CES 2012, where the company dunked smartphones into the water and brought them back out fully functional.

The company is currently working with manufacturers to get the technology into mobile devices. Smith says to expect more news on the progress of Hz0 within the year.

Protection Is the Plan for Mobile Perfection 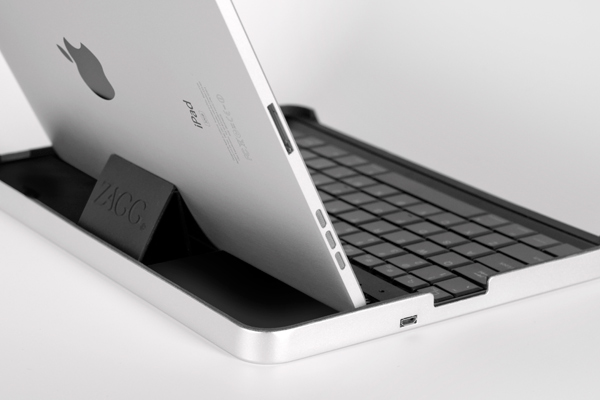 The ZAGGmate case protects the iPad with its aluminum shell and also boasts a physical keyboard for increased productivity.

So on what mobile-device protection options can users rely? When it comes to smartphones and tablets, cases provide the primary form of protection. ZAGG is an expert in mobile-device cases, but Smith believes in cases that provide additional functionality along with protection.

The ZAGGmate cases are made of aircraft-grade aluminum, Smith says, which means an iPad enclosed in the ZAGGmate can survive a 6-foot drop.

Don’t believe him? Maybe you’ll believe MC Hammer, who went on Oprah to show off the ZAGGmate case in February last year.

But there are plenty of other manufacturers of mobile-device cases out there for perusal. Otterbox is a big player, with its Defender case getting rave reviews for iPhone protection. And some high-quality mobile-device cases are first-party; for instance, Apple’s bendable smart cover for the iPad 2.

Accidents happen, and every user should be prepared to handle the worst. But with quality mobile accessory cases available today and waterproofing technologies on the horizon, the toilet, sweat, baby drool and coffee (and cats) could soon join the list of things mobile users don’t have to worry about.