MENU
Log in
“You could say we chose to be green, long before it was cool to go green,” says Bill Burke of WR Starkey Mortgage.
Home»Data Center

Although underwriting is a critical function for mortgage lending businesses, you won’t find any underwriters sitting in offices at WR Starkey Mortgage. Instead, the Plano, Texas, company has sent them all home.

But that doesn’t mean the 400-­employee mortgage company operates without underwriters. Rather, the company’s sustained pursuit of green IT principles now permits the underwriters workgroup to telework, freeing up valuable real estate.

“We started with our underwriting staff, but we’ll continue evaluating operations to see how many people could become teleworkers,” says Bill Burke, ­Starkey’s CIO. “Then, we gain office space to add loan officers and other client-facing employees without expanding our facility footprint.”

Whether it’s economizing on office space or reducing energy expenses, companies such as Starkey reap significant rewards from their long-term commitment to green IT, says Mark Peters, a senior analyst with the Enterprise Strategy Group (ESG). “Many businesses find real and sustained economic advantages,” he says.

This certainly proved true for Starkey, where the sustainability story begins with its founding in January 2000. “You could say we chose to be green, long before it was cool to go green,” says Burke. Indeed, Director Scott Benson confirms sustainability was a fundamental principle from the start. “Where I’d worked previously there were servers at every branch,” he recalls. “Having all that technology to churn every three to five years just didn’t make sense.”

Starkey centralized IT from day one, pursuing a client-server strategy using Citrix technologies, Burke says. “Outside of basic routing, switching and desktop clients, we’ve never had any need to power or cool network-related equipment at branch offices.”

For further efficiencies, Starkey standardized on Microsoft solutions — ­Windows Server, SQL, Exchange and Office — in the data center and on desktop systems.

Brian Klesc, Starkey’s network engineer, notes that centralization and ­standardization also conserve maintenance resources. “No one is flying to our Denver branch to repair a local server or train people to back up their computers,” he says.

Plus, security in Starkey’s highly regulated industry is streamlined because all data is created and stored at the headquarters location.

Embarking On a Paperless Path

Starkey continued its push toward ever more green practices by adopting paperless mortgages in early 2003 and scanning basic images of loan documents.

Exclusive deployment of thin clients came next, in 2005. “We standardized on HP for consistently high quality, reliability and longevity,” Burke says. “Plus, we can get them overnight, allowing us to configure and deploy rapidly.”

In 2006, Starkey ditched stand-alone copiers, faxes, printers and scanners in ­favor of HP multifunction printers, saving up to 79 percent on power consumption while tightening integration with the company’s appliance-based fax and imaging solutions. 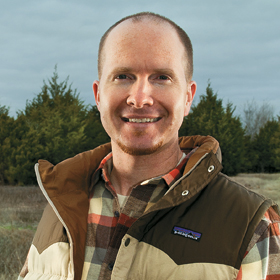 “We dropped physical Citrix servers from 23 to two, saving about 66 to 71 percent on power consumption and reducing our server room’s cooling needs significantly.”
– Bill Burke, CIO at WR Starkley Mortgage

“Documents are now indexed at the MFP and scanned directly into our imaging system,” Burke says. “This significantly streamlines employee imaging chores and, in turn, drives down the time and IT system resources necessary to move a loan file through the process.”

“For example, DSS allowed us to establish custom settings for each type of mortgage document, such as property titles and deeds,” he adds. “This permits employees to simply choose the appropriate document type from a list.”

Environmental benefits of the MFPs also include disposal. “Because the MFPs weigh approximately 85 percent less than the combination of stand-alones, there’s a significant reduction in material that goes to the garbage heap at the end of a device’s useful life,” Burke points out.

Next stop? Virtualization, which began with VMware in 2007. “Since Citrix’s technology had matured, we quickly rebuilt and virtualized the environment,” Burke says. “We dropped physical Citrix servers from 23 to two, saving about 66 to 71 percent on power consumption and reducing our server room’s cooling needs significantly.”

The most recent phase in the green journey kicked off in 2010 when Burke and his team decided to ­re-evaluate and refresh where necessary. “Citrix was still the best choice for features, functionality and stability,” Burke says. “We haven’t made a single support call since ­February 2007.”

The exercise, however, turned up other opportunities, such as replacing traditional notebooks with HP thin client notebooks and virtualizing software applications with Citrix XenApp. The latter project eliminated another 20 physical servers. Additionally, the team adopted two other Citrix solutions.

The first, ­XenDesktop, provides more robust tools for desktop virtualization. The second, Repeater, is a WAN optimization tool, which deployed so smoothly that “it was almost plug-and-play,” Thomas says. “Because it allowed us to prioritize traffic, employees noticed an immediate performance improvement,” he adds. “And, we need two to three times less bandwidth than before.”

To round out the refresh, Starkey upgraded to Cisco Systems switches and ­Fortinet firewalls for speedy Gigabit-­Ethernet LAN networking. In the process of achieving efficiencies, the IT team uncovered a performance bottle­neck related to Starkey’s iSCSI SAN. Instead of adding traditional spinning disks, Starkey began transitioning to greener Fusion-io solid-state drives.

“Because drives are PCI cards that fit into our virtualized host machines, no additional rack space is required,” Burke says. “They are also low-power and low-cooling.”

All the performance gains created an environment that made the telework initiative possible — and a resounding success. “Our underwriters love the telework arrangement,” says Cynthia Seay, VP and underwriting manager at Starkey. “It has increased our department’s productivity because there are fewer distractions,” she adds. “And, as a go-green person, I appreciate the environmental savings from not commuting to work every day.”

To enable telework, Starkey outfitted employees with two energy-efficient LCD monitors, one each from HP and LG, as well as an EPEAT Silver and Energy Star 5.2 thin client desktop. The machines run Citrix to enable controls. “Our Citrix policies ensure compliance, such as denying access to USB drives or local printers,” Burke says.

Despite having 35 branch locations, nearly two dozen teleworkers, 162 virtual servers on four physical servers and a collocation site for business continuity, ­Starkey administers IT operations with a lean four-person staff. In addition, Starkey now delivers 85 percent of closed mortgage loans to its investors as paperless, imaged files; the recent integration of e-signatures into loan application documents is expected to push that percentage up further. In short, Starkey management believes that green IT keeps them ahead of the mortgage industry pack.

“No matter what happens to a physical location, our productivity isn’t seriously impacted,” says Burke. That’s a major benefit, he says: “Our people can log in to our environment from anywhere, at any time, because Citrix keeps expanding the types of mobile devices it supports. That’s incredibly rare in the mortgage industry, which means we’re head and shoulders above the rest.”