A new crop of wearable computers in prototype promises to bring hands-free computing and communications power safety and mobility for small and medium-size businesses.

At the forefront of this push is Motorola’s Golden-i, a headset system with a 15-inch virtual display, speech- and gesture-recognition controls, and a near-ear speaker. Weighing 6 ounces at most, this Bluetooth/Wi-Fi headset can be used with a helmet, hard hat or safety glasses, making it an ideal fit for workers in manufacturing and construction.

“The majority of people go to a job that requires one or two hands,” says Jeffrey Jacobsen, senior adviser to the CEO and the Golden-i program manager at Kopin, which developed and licensed the Golden-i technology to Motorola for distribution in industrial environments.

“If you look at the mobility of a cell phone, PC or tablet, you have to hold it in one hand and use it in another, which is generally distracting,” Jacobsen says. “We’re offering hands-free operation so people can get the information they need in real time from other systems.”

The Golden-i manufacturer released a developer’s kit for the headset this April and shipped a few hundred prototype versions to developers. Full commercial availability is slated for the first quarter of 2012.

Meanwhile, General Dynamics Itronix has developed a new ruggedized handheld computer called the GD300 that can be worn on an armband or chest band. Weighing less than 8 ounces, the GD300 features a global positioning system, tactical radio and the Android operating system. It has an outdoor-viewable, glove-friendly touch screen and 8 hours of battery life.

Wearable computers aren’t new; they run the gamut from tablet devices with hand straps used by postal workers to wristband calculators worn by marathon runners. But the latest wearables promise to make these devices appealing to a broader range of field technicians.

“Heads-up displays have been around for a while, and they are in use by fighter pilots and helicopter pilots [and have] other industrial applications,” says Carl Howe, director of consumer research at the Yankee Group. “The Golden-i is a much smaller device and less obstructive. The cool thing is that it integrates speech recognition as well as video.”

Wearable computers are best for workers who don’t have access to traditional media such as manuals or diagrams, says Howe. “The ability to pull up information quickly on a device that doesn’t get in your way is really key.”

“Golden-i is ideal for any kind of emergency response,” Jacobsen says. “People doing terrorist response or earthquake response — anybody with a limited amount of vision. If I have a Golden-i on, I can see with infrared or ultraviolet or switch between the two. All of a sudden I’m Superman; I can see through walls. I can see things that I normally wouldn’t be able to see, like heat signatures.’’ 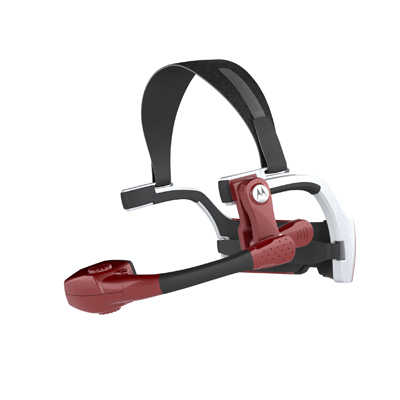 The estimated initial price of the Golden-i wearable computer computer is $2,000.

Wearable computers such as the Golden-i and GD300 can be integrated with cameras and sensors, including biometric devices that measure the user’s heart rate and blood pressure.

“I can be passively monitored wherever I am: my respiration, pulse, body temperature, my blood pressure,” Jacobsen says. “If I suffer from altitude issues and I’m about to pass out, the system can tell me to sit down and put my head between my legs.” The Los Angeles Police Department, the New York Police Department and the San Jose Police Department have all expressed interest in Motorola’s Golden-i system. “This offers them so much more capability than a ruggedized notebook,” Jacobsen says.

The possibilities for the Golden-i platform and other wearable computer products are vast. They are more than just futuristic toys, wearable computers could actually change the way people and businesses work.

"The Golden-i(R) platform offers spontaneous mobile access to virtually any digital information in the world, on-demand," Jacobsen said in a press release last November. "Imagine leaving your laptop at the office and still having full access to all of its information, applications and services while traveling. The Golden-i platform will truly change the way people work and live."