The bright side of a down economy is that there’s now a pent-up demand for IT infrastructure, especially wireless LANs.

Demand for wireless LANs began to grow last fall with the ratification of the 802.11n standard. Dubbed the next generation of wireless performance, 802.11n is the fastest wireless LAN standard to date.

Combine these factors with the speed of 802.11n, up to 600 megabits per second, and the case for deploying this latest standard is persuasive.

Years in the Making

Wireless LAN rollouts have evolved over the years. This year begins the third decade in which wireless LAN technology has been available.

Since the early 1990s, when wireless products first hit the market, the technology has been widely accepted. It frees employees, as well as business partners and customers visiting a corporate office, from the tether of a desktop computer or a wired network connection.

It eliminates what is often a costly and time-consuming effort to extend network cabling and electricity to individual desktops or hard-to-reach locations. And wireless LANs help knowledge workers remain productive regardless of where they are sitting.

Of course, these benefits were available before 802.11n. But with the new standard’s support for up to 600Mbps, 802.11n products legitimately rival the performance of wired infrastructure for the first time.

It’s possible to replace an entire legacy wireless network and endpoints such as notebook computers in one fell swoop. But that scenario usually makes sense only for companies with deep pockets.

More often, small firms are likely to take a staged approach, which is less disruptive and easier on the budget. This results in a hybrid network, typically consisting of a mix of 802.11n plus a/b/g equipment.

At the very least, a company switching to 802.11n will need new access points, a new controller, and Fast Ethernet or Gigabit Ethernet for the backhaul to connect the APs. Most companies already have a wired Ethernet infrastructure.

From all indications, wireless networking will improve. Craig Mathias, founder and principal at the Farpoint Group, expects products capable of 600Mbps to be widely available by the end of 2010, followed by gigabit wireless LANs as early as 2011 (although a standard for this technology will likely not be approved until 2012).

All these advances, in combination with the expected ubiquity of smartphones and other leading-edge wireless devices in smaller companies, might just be what it takes for SMBs to make the leap to all-wireless networks. 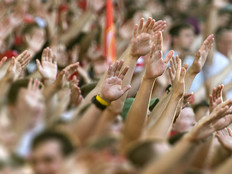