You’d be surprised by the things people will steal. As the economy has steadily worsened during the past 18 months, a corresponding rise in shoplifting and outright thefts has plagued retailers and their distributors. Case in point: Bozzuto’s, a wholesale grocer that supplies 900 East Coast grocery stores.

P. Allen Spriggs, vice president of surveillance and corporate security for Bozzuto’s, has seen an increase in thefts at the dock. “People will open a case of Lunchables, take out one box, open it up, and eat the dessert. Just by doing that they destroyed the value of the case,” says Spriggs. At the other end of the spectrum, whole 50-foot trailers full of goods have disappeared overnight, costing thousands of dollars.

Bozzuto’s has been using video surveillance for 13 years, but recently Spriggs made the switch from analog cameras to IP cameras that can share data on the company’s information network, allowing easier collaboration and storage on DVDs.

“I have security staff looking at the cameras in real time. We can also review if we have a question about something,” he says. Spriggs retrofitted many of the company’s analog video cameras with encoders, which lets them generate digital content. But when he adds new cameras, they are always IP-based, like the Axis 215 PTZ (pan-tilt-zoom) Network Camera from Axis Communications.

“The prices have come down tremendously, and the return on investment is huge,” says Spriggs. “The resolution is much better compared with analog video, and you can control smaller items or detailed items much better.” Spriggs says these cameras will pick up everything from the pilfering of a candy bar to the theft of an entire trailer of goods.

Eyes in the Sky

The Axis 215 PTZ strikes the right balance of features versus affordability for business users. The position of this PTZ camera can be easily controlled by a remote operator to cover all angles. Users can control the camera by joystick from a remote location — even via a cell phone.

The 215 PTZ is perfect for the indoor surveillance of shops, reception areas, schools, offices and other places that require both overview and zoom capability. Another benefit is that extra cabling is not needed to install the camera and share data over the network, providing flexibility in installation.

“We have eliminated our problems with theft and cut down on the number of guards. IP security cameras have been very cost effective.”
— Glen Hotinksi, director of operations, Paragon Honda Auto Group, Woodside, N.Y.

15%: The 2009 global growth rate of IP cameras. Defying the downward pull of recessionary forces, demand for IP video surveillance equipment in the Americas is fueling the growth.

What do you consider the most important part of a physical security solution? 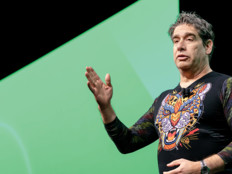