In recent years, IP-based security cameras, and the networking they enable, have opened up new approaches to physical security, allowing for more immediate responses and stronger remote management.

And while the goal has always been security — checking as people come and go, to keep the building and people in it safe — the added digital capabilities have created new avenues for surveillance. For example, enhanced video surveillance (EVS) opens the door for analytics and business intelligence use cases, with artificial intelligence offering a helping hand.

Building a modern video security infrastructure requires the right mixture of infrastructure approaches, including not only the right onsite hardware but also capable networking, well-designed data centers and the appropriate software to manage these tools. 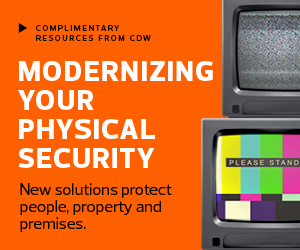 IT departments play a vital role in supporting organizations’ video surveillance activities, especially when it comes to infrastructure. In fact, nearly 63 percent of IT professionals say the aspects of physical security that they are most involved in are video storage and equipment maintenance.

In the days of tape recorders, it was not uncommon for businesses to record over the same tapes repeatedly, risking the possibility that an important video might be long deleted before anyone knew it contained important information — for example, images needed for a law enforcement investigation.

Even when video moved to hard drives, storage space became a constant concern. These days, however, offsite video storage delivers many advantages, including longer storage periods, quicker searches and even the ability parse business intelligence from the video, for sectors such as manufacturing. This creates a growing need for data storage, both onsite and through cloud services.

As an #IT professional, which aspect of #PhysicalSecurity are you most involved in at your organization?

Of course, offsite data storage is one thing, but if there are networking challenges onsite, video might not be captured if the network is down.

Jeremy Weiss, a cybersecurity practice lead for CDW, noted in a recent CDW Tech Talk that the changing shape of the modern network has created challenges for video surveillance. “With traditional physical security, we would think of door access, badge access and cameras. And those are still very important in that space, but often, they were on their own networks,” he explained. “A closed-circuit television, for example — that would use a hard drive or even tape, back in the day.”

Businesses have brought video surveillance systems onto the same networks that run other business systems, to gain IP-based management — but this leaves video competing with other network needs, including IP addresses and bandwidth.

As a result, Weiss recommends managing the network for surveillance separately from the primary network, using tactics such as network segmentation: “I want my physical security to be segmented away from my traditional infrastructure within IT, so that way it doesn’t take any bandwidth, doesn’t take away any access to resources that our users still need to get access to on a day in, day out basis.”

The right approach to networking and video storage will help businesses get much of the way there with a surveillance strategy, but software matters too — and platforms produced by companies like Milestone and Cisco can help transform surveillance video from a useful tool into a game-changing strategic element.

Finding the right video surveillance management system can render multiple streams of updating video more useful, enabling notification systems and motion detection to determine if something needs to be investigated.

These types of technologies scale up in a big way. For example, in manufacturing or retail, such software tools can help build a proactive discipline around security, even catching efficiency issues that may only emerge when analyzing footage in aggregate.

We’ve come a long way from recording over VHS tapes. But to really unlock the power of video surveillance, everything needs to be working in tandem — the network, storage and software tools.