One key element of infrastructure for many businesses is data — lots of data. It’s what a business does with it, however, that can open up new avenues of innovation.

That’s one area where artificial intelligence comes into play. While the concept is often seen as a next-generation way of taking on big problems, it has a lot of real-world use cases right now, as Manoj Suvarna, the category business lead for high-performance computing and artificial intelligence at Hewlett Packard Enterprise, explained during an infrastructure-focused session of the CDW Tech Talk series.

“Collectively, AI is supposed to contribute tens of trillions of dollars into the economy,” he said, adding that the driving factor for this would include areas where manual processes can be automated, such as in the supply chain, sales or marketing, or inventory management.

“Those are processes that are heavily human-dependent that can be easily translated and driven by machines,” he added.

Host Keara Dowd said that predictive analytics, a tool that often comes up in discussions about AI and infrastructure, can be helpful in settings such as retail (highlighting how the topic came up during the National Retail Federation’s 2020 annual conference) as well as in healthcare and in the federal government.

“Ultimately, predictive analytics can serve as a form of maintenance, allowing organizations to optimize their resources and address problems before they find themselves in crisis,” she said. “And if the last 11-plus months have shown us anything, it’s just how valuable that can be.” 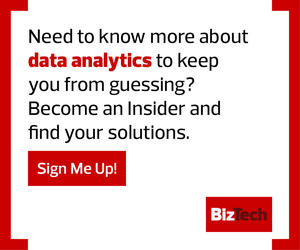 There are plenty of signs that AI adoption is likely to grow in response to the pandemic, as businesses look to the technology to speed up business processes. Suvarna said roughly about half of businesses are at a stage in which they’ve either developed an AI initiative or are experimenting with one.

However, many organizations don’t know where to start with AI efforts. Based on data shared by Suvarna — and on responses to live audience polling during the session — many are still in the early stages of planning around artificial intelligence. He recommended that those just getting their footing take a more measured approach.

“The fact of the matter is, there is a vision, and there's a path to get there,” he said. “But you are at a phase of the journey where you need either a crawl-walk-run approach or to take multiple baby steps in order to get to that desired phase.”

Suvarna outlined a number of areas where AI already works in real-world use cases:

Automobiles. Suvarna said that automotive companies have been able to learn greatly from the massive amount of data that they’ve captured from vehicles on the road, which he says has enabled driver assistance technology and even autonomous driving functions, which he says “have the ability to make decisions in a matter of seconds.”

WATCH: Learn how embracing work from anywhere can power your workforce.

Supercomputing. Whether it’s used for weather forecasting or tracking nuclear stockpiles, the federal government has made significant use of AI in supercomputing applications.

Banking. Suvarna said that AI is a key element of fraud detection, making it possible for banks to detect unusual purchase patterns and to immediately confirm them with customers. “You get an alert on your phone, and it wants to validate within a matter of 5 to 10 seconds whether this was you making the transaction,” Suvarna explained.

Retail. AI is also being used in anti-fraud efforts, and Suvarna explained that it is frequently being implemented in settings such as contactless purchases and self-checkout. He also highlighted how AI can help with inventory management and similar logistics issues by assisting with loss prevention and helping track total inventory on shelves.

Ultimately, AI is more than a buzzword or trend, Suvarna emphasized.

“A lot of organizations are actively looking at leveraging AI in order to enhance their business processes,” he said.

The Human Role of Security Infrastructure

From an adoption standpoint, security has the opposite problem that AI has: It’s an area already heavily automated in many organizations that could use a bit more of a human touch.

Gabriel Whalen, manager with CDW’s information security solutions practice, explained the human role in security by comparing an organization’s infrastructure to an elephant.

Sometimes, he said, the things needed to protect the elephant are human assets, such as workers within an organization, or vendors that work outside of it. At some point, however, human assets alone may not be enough, and technology can help. This is a critical point at which to put in place proper frameworks, such as those offered by CDW Amplified™ Security Services.

“Having those policies and processes in our environment is going to inform not only the technologies but the people, how they operate, and then that reporting chain throughout the organization,” he said.

Whalen added that he expected a growing interest in security frameworks over the next year, which he called “a movement in the right direction.”

“I’m seeing a lot of interest and movement toward how we can look at security frameworks, and how we can do it without breaking the bank completely,” he said.