Patrons check out the wild reef exhibit at the Shedd Aquarium in Chicago.

What a difference a few months make. Daniel O’Mahoney is candid about the state of information technology at the Shedd Aquarium in Chicago when he took over as vice president of IT in March 2017, after many years in healthcare IT. And it wasn’t good.

“Tech at the Shedd is not the same as tech in health,” he told attendees at CDW’s Executive SummIT: Orchestrating a Modern IT Strategy. “Technology was not a priority for a long time, and that was evident when I came in the door. My goal was to demonstrate the strategic value of IT to the community and internal team.”

That’s especially challenging in the museum industry, which is not known for making digital transformation, or even reliable Wi-Fi, a priority. In the first days after accepting his new position, O’Mahoney visited other museums, zoos and aquariums to understand the state of the art in museum tech.

“My big takeaway from that was, I don’t want to use museum technology,” he said. “So much of it was down, outdated and not working right.”

The 88-year-old Shedd, which welcomes 2 million visitors yearly and is home to 32,000 animals, was no exception. For example, the aquarium had planned to deploy a guest Wi-Fi system using equipment donated by a trustee, but when O’Mahoney arrived he found the equipment sitting around uninstalled and unused.

LEARN MORE: Check out “The Modern IT Infrastructure Insight Report” by CDW!

Deploying that guest Wi-Fi was one big priority for Shedd during O’Mahoney’s early days. That’s done. Other priorities: Bolster a technology team that was woefully understaffed, enhance the guest experience more generally, implement a stable infrastructure and more.

Staffing was a big item. There were only 10 people on the IT staff when O’Mahoney arrived, and not all of the team had the right skill set to manage a modern architecture. The team lacked even a single true developer, for example, meaning it couldn’t really build new applications. 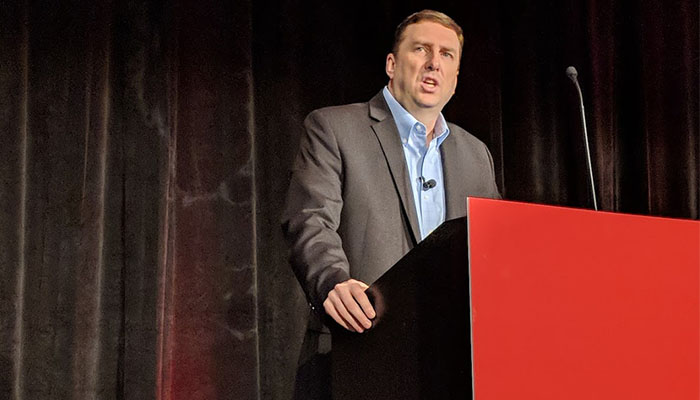 “There was significant lack of trust in the IT department,” he said. “They weren’t getting projects done, and they weren’t meeting commitments.” As a result of that low trust level, aquarium staff sometimes worked around IT to get things done, bringing a lot of rogue IT onto the network that the team knew nothing about.

More broadly, the visitor experience was not what it should have been. The aquarium’s pricing structure was complex, and its point-of-sale technology needed an upgrade. As a result, it simply took too long to move people through the ticketing process, and lines grew long.

“We had lines going out the door, down the stairs and out to the hot dog stand,” O’Mahoney said. “We had people leaving the aquarium to go to other museums because our lines were too long.”

Price complexity also created problems on the aquarium’s website, where people too often abandoned their online carts before completing their purchases.

Much has changed today. A new, simplified pricing structure is being supported by an upgraded POS system that’s now fully compliant with the Payment Card Industry Data Security Standard. A new infrastructure is being deployed that will become the platform on which all the aquarium’s current and future digital transformation will live. And Shedd is in the process of deploying Microsoft 365.

Meanwhile, the culture is changing. O’Mahoney now has a 15-member IT team with a mix of skills, and he’s recruiting more. He’s partnered with the aquarium’s CEO, Bridget Coughlin, who joined the organization only about a year ahead of O’Mahoney, and with a newly energized technology board to implement a vision for digital transformation within the organization.

Much of O’Mahoney’s job was to show his colleagues inside Shedd the power of a well-designed and properly maintained network. Now, a team that mostly tried avoiding IT is demanding deeper engagement and more capabilities.

“I have to slow them down,” he said. “But just a little. Nobody was asking for Microsoft 365, nobody was asking for a new network, but everyone was complaining when the network went down periodically throughout the day or they couldn’t get their email offsite.”

This is what digital transformation looks like in a modern museum, O’Mahoney said.

“You don’t do anything without IT,” he said. “IT always needs to be at the table, no exceptions. And when you’re working with a small internal team, it’s vital to have the right strategic partners in place.”

MORE FROM BIZTECH: Don't miss out on the rest of our coverage from CDW's Executive SummIT!